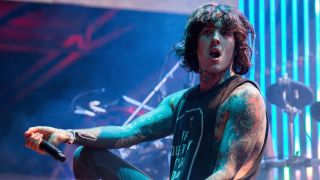 Bring Me The Horizon are one of the biggest metal bands of the 21st century. Since forming in 2004 the British five-piece have transformed themselves from scrappy deathcore upstarts into a geniune commercial powerhouse with the songs, pulling power and, thanks to frontman Oli Sykes, charisma to top charts and fill arenas around the globe. Their success hasn’t been smooth sailing – they were initially written off as a bunch of overhyped pretty boys, while their burgeoning mainstream ambitions angered the more blinkered sections of their fanbase and the metal community at large. That’s their loss, because few bands right now have as much hunger, ambition and ability to write the sort of choruses that are big and heavy enough to floor a T-Rex as Bring Me The Horizon, as these 10 songs prove.

‘We will never sleep cos sleep is for the week, and we will never rest ‘til we’re all fucking dead!’ The words that have started a thousand mosh pits are in one of the stand-out blood-drenched gems on BMTH’s snarling commercial breakthrough album Suicide Season. Driven by pummelling drums, low-end chugging and Oli Sykes’ barbed vocals spitting razors until until his larynx splits in two, it’s not a song to play for your mum.

Formerly a highlight of Bring Me The Horizon’s live show, the band’s 2010 release from There Is A Hell, Believe Me I’ve Seen It, There Is A Heaven, Let’s Keep It A Secret was their first foray into experimenting with high-end electronics and production. The punked-up, infectious, snarling chorus is juxtaposed early on by the ethereal choral vocals that float through the whole album, showcasing a different, more harmonious side to the Steel City menaces. That said, the crunching, destructive riffs rid any notion of mainstream radio play as four and a half minutes of metallic fury hurtle past in the blink of an eye.

Not such a ferocious track, but one of the better sentimental songs in BMTH’s acrimonious arsenal. For years, the Sheffield noisemakers had been seen as purveyors of unadulterated aggression, but in There Is A Hell…’s penultimate track, Oli begins to open himself emotionally for the first time, showing a different dimension to one of Britain’s biggest bands. And if you think that might not be for you, just listen to the stadium-sized chorus and watch your bollocks fly into the next post code.

Back to the gravel-gargling era of Mr Sykes and co, before the idea of clean vocals had ever been planted in the studio, this is one of the nastiest songs to ever be called catchy. BMTH have always known their way around a tune, but this sits at the other end of the spectrum, so visceral and horrific is the soundscape created that the idea of silence begins to feel like a distant memory. From the brutalising breakdowns to the primal screams of ‘Repent! Repent! The end is nigh!’ it’s one of the few Suicide Season tracks still sneaking onto setlists.

What seemed unfathomable a few years previously, the former deathcore deviants opened their first major label album with dramatic, heart-stopping electronics that sets the tone not just for Sempiternal but Bring Me’s career from that point on. Historians will one day look back on these 228 seconds as the point the metal game changed. Swelling and building to a monumental crescendo, it’s arguably the finest use of electronics ever in a BMTH song as guitars barely get a look in, and justifiably used to open pretty much every gig since 2013.

Playing a game of Russian roulette isn’t referenced enough in metal these days, but back on There Is A Hell… it opened one of the most intense and vitriolic songs of Bring Me The Horizon’s career with its unstoppable flailing fury and bloody imagery. Barely pausing for breath throughout, it’s a cataclysmic flurry of guttural growls, frantic riffery and the battering of crash cymbals. Flirting with the idea of more celestial electronics in the mid-section, it’s the screaming of ‘Put a gun to my head and paint the walls with my brains’ that reminds you why the band weren’t considered mainstream at the turn of the decade.

This is the biggest song Bring Me The Horizon have ever written, both in terms of popularity and its ability to fill every corner of a stadium. À la Can You Feel My Heart, it opens on infectious electronics before skydiving into one of the most epic “Whoas” this side of Bon Jovi. With so many fist-in-the-air moments scattered among the debut single from the chart-smashing album That’s The Spirit, this is when BMTH’s intentions of conquering the world became all-too clear, and the idea of a No.1 single wasn’t immediately laughed out of the room. Impossible to ignore and if you can make it all the way through without bouncing off the walls you should probably visit the doctor.

The criminally overlooked opener to There Is A Hell… is one of the heaviest songs in the band’s impressive catalogue. Dive-bombing into a hellacious sea of juddering electronics, crashing cymbals and gnarled guitars, Oli sounds his most menacing as he bellows with every ounce of passion and hatred he possesses. It’s also the first time we heard the power of programming and keyboard extraordinaire Jordan Fish as the album title floats angelically throughout the aural punishment, before the endemic lyrics consume you. All together now: ‘Pray for the dead! Pray for the dead!’

The unchallenged highlight of Bring Me The Horizon’s Sempiternal album, and a song they’ve yet to top. Unrelenting, racketing drums back up the distorted metallic riffs and the giant, engulfing layers of vocals that could level buildings. It’s the epitome of Oli Sykes’ penchant for sloganeering choruses with the infamous ‘when you die the only kingdom you’ll see is two foot wide and six foot deep’ that is adorned on countless BMTH t-shirts. It’s heavy, it’s catchy and above-all it’s interesting. It’s a formula that many metalcore bands have tried to mimic in the years since its inception and few have been able to come close.