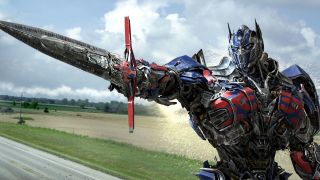 So the Transformers are back and God knows what on Earth they're doing this time around – we've seen the new film and we're still not quite sure what happened if we're honest. What we do know however, is that it's Michael Bay being EXTREEEME once again, so to celebrate, here are the ten most metal things about Transformers 4.

1. There is some ROCK music on the soundtrack

Let’s get the obvious one out of the way first. There are some songs with guitars in them in Transformers 4. However, they are mostly RUBBISH. Think Nickelback-type stuff. Picture big robots with massive guns running about punching each other and then think about Nickelback playing over the top. Then think about what your face would be doing in this situation. Yeah, you’ve about got the gist of it.

2. There are ROBOT DINOSAURS in it

Oh ok. Ok cheers, thanks. Let’s just forget about those two and concentrate on robot dinosaurs instead. They’re clearly the actual best. Phew.

3. The main bad guy has a gun that comes out of his FACE

4. Optimus Prime has FLAMES on his truck

Optimus Prime is obviously a fan of Linkin Park because he’s gone and copied Chester Bennington’s flame tattoos and stuck them on his bonnet. Flames on a truck are a good thing. Unless of course they’re real. In that case you’d probably better get the fuck out of the cockpit.

5. There are loads of EXPLOSIONS in it

6. There are ROBOT dogs in it

Okay, robot dogs are not quite as good as robot dinosaurs, but they’re still pretty cool. There are two types of robot dog in Transformers 4; there’s the pants one that Mark Wahlberg built, and then there are the cool bad guy ones. In fact, we might go so far as to say that robot dogs might be better than real ones. Not only do you not have to clear up their turds, you don’t have to take them for walks – they just turn into cars and you can ride to the shops in them. The RSPCA start sniffing around if you try to ride a real dog to the shops, trust us.

7. There’s an aggressive GEOLOGIST in it

She’s all stompy and angry and important, because geologists are a big deal okay? Who’s the first person you turn to in the case of an alien invasion of robot monsters? GEOLOGISTS. THEY’LL KNOW WHAT TO DO!

To be honest, the main reason we included this is because, in case you didn’t know, geologists ROCK.

There is one scene where everybody has to climb across these chains suspended a million feet off the ground and it is almost impossible to watch. It makes you feel sick. This is metal because we have been SICK at Download before. And Sonisphere. And Bloodstock. Name a festival, we’ve been sick at it.

9. There’s a hell of a lot of PRODUCT PLACEMENT!

Okay, we’ve run out of ideas now. But you know, erm, there’s a scene with a load of Bud Light in it. Beer is good isn’t it? Yeah?

10. Oh yeah all the Transformers are made of METAL

Yeah forgot about that one…