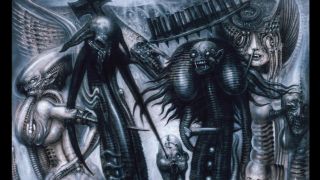 It was announced today that renowned artist H.R. Giger had passed away. We're big fans of Giger's here at Hammer, both for his work in film and on canvas. And that's why we've put together this collection of some of his greatest pieces of work that made it into the metal world.

The Swiss extreme metallers enlisted Giger for their second album To Mega Therion (Greek for ‘the great beast’). And while ‘beast’ can mean different things to different people, in true Giger style he went straight for the darkest of the dark – Satan. Using a crucified Jesus as a catapult is a surefire way to piss people off and we wouldn’t expect anything less.

After working with Tom Warrior on the Celtic Frost album art above, Giger stepped up to work on his new project Triptykon. And what happened in those 25 years apart? Well Giger’s art had become more intricate and twisted, with each passing day it seems, and this Alien-esque cover for Eparistera Daimones opens more surreal doors the more you stare at it.

In 1993 the Scouse death metallers called upon H.R. for an album that has become an essential for any fan of extreme metal. Although not strictly artwork, the Heartwork sleeve is a reworking of Giger’s sculpture Life Support 1993. Despite not feeling as generally foreboding as some of the covers on this list, there’s something unsettling about a human spine draped across the international symbol for peace.

The Misfits man worked with Giger for his third solo effort and it encapsulates the album’s more doom direction beautifully (if we can call it beauty?). The cover is a slightly altered version of the painting Meister Und Margeritha with the erect penis removed. The inclusion of the mouths either side still remind us of Alien, though, and that’s always a bonus.

Another entry for Tom G Warrior now, and this time it’s their most recent album – Melana Chasmata. This might in fact be the last piece of work we see published by Giger and it’s a wonderfully demonic cover. At first glance it resembles a biomechanical claw, but it’s only when you look deeper into the darkness you see faces and dead eyes staring back at you.

You’re right, there is no Dead Kennedys album called Penis Landscape. But if you bought their Frankenchrist LP back in 1985, you’ll also have received this poster. Originally part of a Paris art collection, Giger let Dead Kennedys use the artwork as an inserted poster – much to the outrage of timid parents everywhere. A lawsuit soon followed which nearly bankrupted record label Alternative Tentacles (a name that could also have been used for the poster).

Less immediately evil and definitely less penis-y, the album art for Hallucinations comes from Giger’s work Nº 93, “Hommage an S. Beckett I”. And while it might seems like a bunch of weird, Dali-esque, shapes are falling out of a TV, there’s cohesion and a story being told. Look at the top, there’s a mouth licking its lips that doesn’t look too dissimilar to the Danzig album we mentioned. Pretty neat, huh?