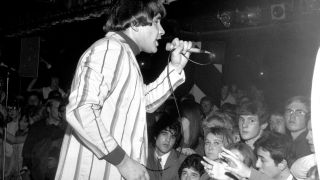 The Beatles’ Yesterday is far and away the most covered song on the planet. But a spirited case can be made for Wild Thing closely bringing up the rear.

The Troggs were the first to have a UK hit with a cover of it (No.2 in 1966) , but a long list of artists that includes Jimi Hendrix, Fancy, Sam Kinison, X, Prince, Warren Zevon and, most recently, Bruce Springsteen have put their spin on its simple chord progressions and sweaty lyrical sentiments. But the song’s writer Chip Taylor (brother of actor Jon Voight) sees what many consider the ultimate distillation of pure, rock’n’roll heat as a more important step in musical history.

“I guess it is the most covered song on the planet,” chuckles Taylor. “Particularly if you include all the kids who learned guitar by playing it.” It’s easy to see why so many aspiring rockers took to the song as their first lesson. Strummed in a bluesy rock A-major and using a simple chord progression, Wild Thing was that raunchy, goofy ode to unbridled lust that anybody could relate to and that almost anybody could play – all the things that have made Wild Thing perfect cover fodder for major stars and rank amateurs alike.

However Taylor insists that Wild Thing in execution and intent was serious business. “I treat all my songs seriously,” he says. “There was an honesty to the song. Sure, when you break it down there’s not a lot to it. But when I was writing it, I was treating it as the most serious thing in the universe.” By 1965, Chip Taylor, who readily admits he was writing “sweaty kind of dumb things because I didn’t know a lot of chords”, had made a name for himself as an April Blackwood Music staff writer in the country vein, penning songs for the likes of Johnny Cash, Willie Nelson and Chet Atkins. He was beginning to expand his horizon as a writer of R&B and rock’n’roll when he received a call from A&R man Gerry Granahan who was looking for a rock’n’roll song for his latest discovery, Jordan Christopher and The Wild Ones.

Taylor had a number of songs already written that would have fit the bill, but he was so flattered Granahan had sought him out that he immediately offered to write an original song for the band. There was one catch. It was 2pm when Granahan called, and he needed the song the next day. “So I laughed,” recalls Taylor, “and told him: ‘Let me see if I can write you something right now.’”

Taylor immediately picked up his guitar and began “chugging away”. The simple chord progression “just erupted”, and before he knew it the instrumental elements were complete. In short order, he had pieced together the first verse. But at that point he hit the proverbial wall.

Faced with a 5pm demo session at the famed Dick Charles Recording Studio, Taylor decided to fully embrace the bluesman in him. He rang up his engineer, Ron Johnson, and told him to have his microphone all set up and to be ready for anything. Taylor arrived at the appointed hour, sat down on a stool in front of the mic and requested that Johnson turn down all the lights. “I had no idea where I was going with it,” he recalls. “I just let it flow. It was all about emotion.” Five minutes later Wild Thing concluded with those immortal lines: ‘Wild thing I think I love you/But I wanna know for sure/So come on and hold me tight/You move me.’

Taylor was thrilled with his new song, but a bit embarrassed that the good Catholic boy in him had been capable of such base feelings.

After The Wild Ones’ version went nowhere, the demos made their way to England where the song came to the attention of producer Larry Page who was shepherding the fortunes of an up-and-coming group called The Troggs. Page originally wanted it to be the B-side to a cover of The Lovin’ Spoonful’s Did You Ever Have To Make Up Your Mind, but the band lobbied long and hard for Wild Thing as the A-side. Recorded in just 10 minutes, and released in May 1966, it took The Troggs to No.1 in the US, and in the UK hit No.2 and propelled the band into the pop spotlight. (The Troggs would go on to turn another Taylor song, Anyway That You Want Me into a Top 10 hit in January 1967.)

Taylor was thrilled at having his first major rock’n’roll hit, and as the years have gone by he has been delighted at the wide array of performers who have chosen to make it their own.

“I felt The Troggs captured the essence of the song,” Taylor says of Wild Thing. “I loved what Hendrix did with it. Jimi took the song one step further with this really amazing, sweaty strum. The Senator Bobby version was a fun thing to do. I even thought the Sam Kinison version had a certain feel and energy to it. I liked what Prince and Warren Zevon did to it,” he continues. “It’s been great to watch over the years as people have taken it in so many different directions.”

Taylor is wary of citing dollars and cents in terms of royalties he’s received from the song over the years, and loudly proclaims that what is going to happen tomorrow is of more interest than what happened yesterday. He does offer that his publishers got 50 per cent of the song. “But I gave 50 per cent of my royalties for Wild Thing to a great publisher and they have definitely worked their asses off for that 50 per cent.”

He’s remained in constant demand as a performer, and it is the rare show that does not include a raucous version of Wild Thing. He acknowledges that singing the song live does bring back memories. “I still have the same feeling that I had when I wrote it. It feels good. It feels sweaty.”