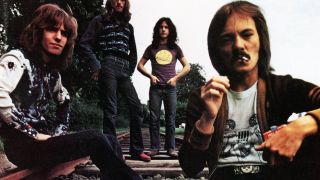 Come the dawn of the 1970s, no band embodied the stylistic shift of the times more than Humble Pie. Psychedelia and the roots revival were on the fade, replaced by the more urgent impulses of rock ’n’ roll and the heavier end of electric blues.

“Glyn sat us down and said: ‘Look, you’ve made some great albums already, but we have to narrow the direction’,” recalls Frampton. “‘This is my viewpoint: Steve’s the singer, Pete’s the guitar player and sometimes singer, Jerry’s the drummer and Greg’s the bass player. Now get on with it’. And he was right. It was about how to channel our strengths. And I believe that’s why Rock On was such a powerful record.”

The album’s blasted white boy blues was best served by stand out track Stone Cold Fever. Led off by a monolithic Frampton riff, the song is a four-minute powerhouse of whiplash boogie, complete with rolling harmonica and a yelping lead vocal from Marriott.

Marriott would usually suggest the band should all sing, and they’d disappear into separate areas of the studio to write their own lyric parts. But on this occasion there was no question as to who would sing it.

“Mainly because it was so damn high in range, it was determined that Steve would sing the lead all the way through the song,” explains Jerry Shirley. “The East End barrow boy singing the Delta blues.”

Despite this, Stone Cold Fever was a prime example of Humble Pie at their most democratic, with all four members sharing a writing credit.

“People think that Steve just came into Humble Pie and stole the show,” says Frampton. “But at that point he was always very open. He knew he had to take the responsibility because he was blessed with that voice and that talent, but he wanted to share it. It was just that he was a special character.”

Frampton may have kicked things off with his power chords, but an unexpected highlight of the track is his deftly expressive solo over a mid-section detour into jazz.

“We were at our most harmonious in every way, musically and personally,” says Shirley. “For most of the group-written stuff, Steve or Peter would come up with an idea. Then, as it all developed, Greg and I would help arrange the whole song. In this case we mostly put the middle piece together, which had the jazzy kind of feel that Peter was playing on top of.”

Such was the band’s prowess at this point – the product of punishing tour schedules and endless rehearsals – that the entire song was nailed in no time.

“Once we’d finished putting it together, we took a break and made some tea,” Frampton recalls. “They all had a joint, but I hadn’t started to imbibe at that point. Steve disappeared into a corner, and within 20 minutes or so he’d written the words. The next time we played it was when we actually recorded it in the studio with Glyn.”

America was by now Humble Pie’s primary stomping ground. Rock On made the lower reaches of the Billboard chart. But the major breakthrough came later that year when Performance: Rockin’ The Fillmore – recorded live in May ‘71 – reached No.21 in the US and became Humble Pie’s first gold-selling record. It also made the Top 40 in the UK, a fitting reward for a set that suggested they were nearing a peak. The sole original song among the inspired blues and R&B covers was an inflammatory version of Stone Cold Fever. Yet all wasn’t as harmonious as it seemed. Just before the release of Performance… in November that year, Frampton decided to quit.

Humble Pie had grown into a fearsome beast, but it meant there was no longer any place for his more ruminative, acoustic side. Plus there was a sense that, with Marriott now the de facto leader, Frampton’s days as frontman were more or less over.

“Absolutely no-one saw it coming,” says Shirley. “There was an inkling that Peter wasn’t happy in that Steve was starting to wear on him. But then Steve wore on everybody. He was a lovely man, funny as fuck, but he just didn’t know how to turn off. And when someone like that is on the go 24-7, he becomes real hard work to be around. We knew that Steve irritated him, but no more or less than he did me and Greg. It’s just that we seemed to handle it better. Then out of nowhere, Peter said: ‘That’s it. I’ve left the group.’”

Frampton, for his part, insists that he left to further his ambitions as a solo artist. He does, though, admit it was a decision he didn’t take lightly.

“Leaving Humble Pie was a huge decision. When I told him, Steve was very upset. I didn’t really want to leave, but I knew I had to. I felt bad about it, to be honest. But I just had this survivor mentality: ‘Well, that was that. Now on to something else’.”

He broke the news on the day Anthony called them into his hotel suite to show off the finished sleeve for the live album.

“I was only about 21 when I left. And of course when …Rockin’ The Fillmore took off and my bank balance was getting much lower, I thought I’d made the worst decision. I thought, ‘This is it. It’s been great so far, but now I’ve blown it.’”

It turned out, of course, that he needn’t have feared at all. In the 70s he attained superstardom with the multimillion-selling Frampton Comes Alive! album. Humble Pie, meanwhile, with Dave ‘Clem’ Clempson as his replacement, consolidated their new-found success with albums like Smokin’ and Eat It, before finally disbanding in 1975.

For Jerry Shirley, the Frampton years still exert a strong pull. “We were one of the best live rock and blues bands there ever was. There was no-one better at the time. The thing about us was that we were consistent. We never had a bad night. But more than anything else, it was just so much fun.”

Humble Pie: The Band Who Never Played It Safe