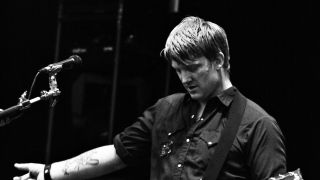 Queens Of The Stone Age’s No One Knows is a modern-day rock classic. Today rock radio pumps out a stream of same-sounding bands, but No One Knows was an exception during 2002-2003. There’s no denying the song’s catchy riff and vocal melody, but if you pay close attention to the song’s structure it makes for an unlikely single. Even to former QOTSA bassist Nick Oliveri.

“When they were talking about doing it as a single, I was like: ‘This is a five minute song, dude. There’s a jam part in here, a bass part, a drum thing. What do you mean, single?’, y’know? They’re going to cut this song up. The last thing I want to do is have anybody edit our song. But we kind of felt we could get behind any of the songs, and whatever single they wanted to choose, the one they wanted to get behind, we just said go ahead.”

And Oliveri is right. Queens’ 2002 album _Songs For The Deaf contained several potential singles, among them Go With The Flow, Gonna Leave You and First It Giveth_. The follow-up to 2000’s Rated R, it was yet another remarkably consistent album from beginning to end. It was also recorded by what was unquestionably the group’s strongest line-up: Oliveri, singer/guitarist Josh Homme and Foo Fighters drummer Dave Grohl were the main players, with guests including Mark Lanegan, who sang on a few tracks: Song For The Dead, Hangin’ Tree, Song For The Deaf.

“Playing on their album was more about playing drums seriously for the first time in eight years than actually joining the band. So it was a really cool experience in that it really recharged that love of crazy rock music, which is why I started doing this in the first place.”

When Oliveri first heard an early version of Go With The Flow he was reminded of one of the standouts on Rated R: “I remember thinking the staccato thing is like Lost Art [Of Keeping a Secret] or something. I was like, ‘Is this the brother song or the sister song?’ I liked that.”

And when asked about if he had any memories of the writing and recording sessions for No One Knows he replies: “When we were recording it I was thinking, ‘This is badass; we’re playing with Dave Grohl!’ No, I’m kidding [laughs]. That was pretty much a Homme tune from start to finish. I think Lanegan lent a hand in that one as well.”

“Me joining the band was more about playing the drums than joining Queens Of The Stone Age,” said Grohl, who, of course, played drums with Nirvana before starting Foo Fighters. “Playing on their album was more about playing drums seriously for the first time in eight years than actually joining the band. So it was a really cool experience in that it really recharged that love of crazy rock music, which is why I started doing this in the first place.”

While there was no denying that the song was quite a catchy little ditty, the hard-to-decipher lyrics made fans wonder what the song was about, exactly. Drugs (‘We get these pills to swallow’)? An expedition via desert (‘I journey through the desert’)… or ocean (‘I drift along the ocean’)? Or a love song (‘I realise you’re mine’)?

When Homme was interviewed by MTV shortly after the release of Songs For The Deaf, he admitted that he was as much in the dark as fans: “It’s a mystery what that song’s about. No one knows. It’s kind of almost Beatles-esque with a driving beat, and it’s kind of jumpy.”

In addition to the song’s catchiness, its whacked-out video had many plays on MTV. In it, a trio of band members (Homme, Oliveri and Lanegan) play hunters, travelling by jeep, who accidentally hit a deer in the road. But the deer has the last laugh on the Queens, when he snaps back to life, smacks each hunter in the head, takes their vehicle and terrorises a pack of boy scouts singing by the campfire, before mounting the Queens’ members heads on a wall. It sounds like some sort of drug-fuelled hallucination, but it somehow worked well, and it was both an original and popular video.

Speaking to the SBI: Generation website, Homme explained that the group had little to do with the video’s plot, as he wanted to leave it in the hands of the director, Dean Karr: “Our thing is that we like to party, and you can’t have every video be like two guys bouncing off each other, it’s gotta have some kind of sexuality and alcohol abuse and some kind of looseness to it. We are that vague.” Additionally, Karr explained the video to Homme at 5.30 in the morning, during a birthday party for the director. “Basically it’s the drunken ramblings of Dean Karr,” he explains.

Queens Of The Stone Age were so eager to play their Songs For The Deaf tunes that they hit the concert trail a few months before its August 2002 release. They remained on the road from May 2002 through January 2004. which is a long tour by anyone’s standards.

With such an intense touring schedule (perhaps too intense, as Oliveri was dismissed from the band after it wrapped up), it shouldn’t come as a surprise to hear that it was while the band were on the road that the bassist realised No One Knows was taking the band to the next level: “When we started getting hotel rooms!”

Throughout the Songs For The Deaf album, several ‘DJs’ can be heard jive talkin’ between the tracks. None reveal their identities during

their respective spiels, and it’s difficult to discern who the mystery DJs are. It turns out that a few are quite renowned in the hard rock community: The Dwarves’ Blag Dahlia (Millionaire), Amen’s Casey Chaos (Six Shooter), Eleven’s Alain Johannes (First It Giveth) and Natasha Shneider (Song For The Deaf) and ex-Marilyn Manson member Twiggy Ramirez (God Is In The Radio) are all heard talking prior to each of the aforementioned songs.