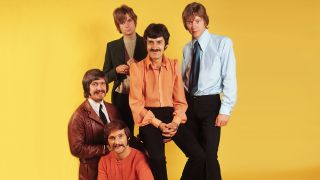 It’s been a hit three times over, sold millions around the globe, appeared on film soundtracks and inspired more than 60 cover versions. There’s even been a theme park ride named after it. Yet half a century after he wrote it, Justin Hayward still struggles to explain the enduring appeal of the Moody Blues’ most famous song, Nights In White Satin. “It’s a curious thing,” he says, “because when I listen to the record there’s just this big empty space and those wonderful echoes that we had in the studios at Decca. But there’s a strange power to the song. It gave us a style that suddenly seemed to work for us. I think it identified the Moodies’ sound.”

First released in November 1967, Nights In White Satin was a masterpiece that bridged pop and symphonic prog, with a lyric ripped directly from Hayward’s personal life – it finds him caught between ecstasy and despair, ruing the end of one love affair while embarking on another.

“There was a lot of emotion that went into the song,” he affirms. “I was nineteen or twenty at the time, living in a two-room flat in Bayswater with Graeme [Edge, Moody Blues drummer] and our girlfriends. I came back from a gig one night, around four or five in the morning, when the birds were just twittering, sat on the side of the bed and wrote a couple of verses. The only people writing in the Moodies then were [keyboard player] Mike Pinder and myself. He’d been working on a song called Dawn Is A Feeling, which I’d heard him fiddling around with, and I knew the other guys were expecting something from me at rehearsal the next day.”

Searching for some kind of metaphor for his emotional turmoil, Hayward remembered a recent gift he’d been given. “Another girlfriend, who was neither the one that had just dumped me or the one that I was then going with, had given me some white satin sheets. They just happened to be in my suitcase and I was trying them out in this place that Graeme and I lived in. They were very romantic-looking, but totally impractical.”

When Hayward took the bones of the song into rehearsal the next day, his bandmates seemed less than enthusiastic, at least to begin with.

“I played it to the other guys and they were a bit nonplussed,” Hayward recalls. “Then Mike said: ‘Play it again.’ So I did the first line, and he went [mimics the melody refrain] on Mellotron, and that’s the phrase that started to get everybody else interested. Suddenly the others could see what parts they might play on it.”

Shaped by producer Tony Clarke and arranger/conductor Peter Knight, Nights In White Satin became a sumptuous epic in the studio. It formed the centrepiece of the Moodies’ second album, Days Of Future Passed, a dawn-to-darkness song cycle that made full use of the Mellotron’s ability to simulate an orchestra. Topped off by a spoken-word poem, Late Lament, Hayward’s song clocked in at nearly seven and a half minutes. Nights was duly edited down as a single, although not everyone at Deram, Decca’s new subsidiary label, was convinced of its worth.

“We didn’t have any power or control over anything,” says Hayward. “The plugger, Tony Hall, went: ‘I can’t plug that!’ and washed his hands of the whole thing. But people like [executive producer] Hugh Mendl thought it was a perfect way of demonstrating their Deramic Sound system, which was Decca’s original purpose anyway. Then it started to really take off in France.”

The single had already peaked at No.19 in the UK when it topped the French chart in February 1968. And while it may not have been the huge hit the label had hoped for at home, it was the Moodies’ biggest success since reaching No.1 with the very different Go Now nearly three years earlier. Crucially, too, it marked the band’s transition from R&B also-rans to torch‑pop trailblazers, at a junction in time when psychedelia was splintering off into exciting new directions.

The album’s credits include the London Festival Orchestra, but Hayward stresses that this was a fictitious guise for Decca’s trusted in-house players. “The Festival Orchestra was a name that we made up,” he explains. “It was a group of session musicians that Peter Knight quickly put together. The only time the orchestra comes in on Days Of Future Passed is halfway through the last verse of Nights. And even then it’s just little diamonds – ‘plink, plonk, plink, plonk’. Otherwise everything [orchestral] you hear on our recordings is Mellotron.”

As the Moodies’ reputation grew, so did that of their most iconic song. Nights In White Satin was reissued in 1972, making the Top 10 at home and reaching No.2 on the US Billboard chart. Seven years later, having by then been covered by such disparate artists as Eric Burdon, Percy Faith, Giorgio Moroder and Californian punks The Dickies, the single charted again in Britain.

The song continues to enjoy a prolonged afterlife. In 2008, South Carolina’s Hard Rock Park in Myrtle Beach unveiled the Nights In White Satin: The Trip theme park, a sensory experience based on Hayward’s tune, with on-board audio, digital effects and psychedelic imagery.

These days Hayward juggles his solo career with life on the road with the Moody Blues alongside fellow Days Of Future Passed veterans Graeme Edge and bassist John Lodge. The trio draw from an illustrious back catalogue spanning decades, but Nights In White Satin occupies a special place in the set-list.

“There’s still so much emotion when we play it,” says Hayward. “It doesn’t matter how well we do it in soundcheck, it’s the audience that brings something magical to that song. The atmosphere in the room is suddenly different. There’s a feeling to it that’s quite electric.”