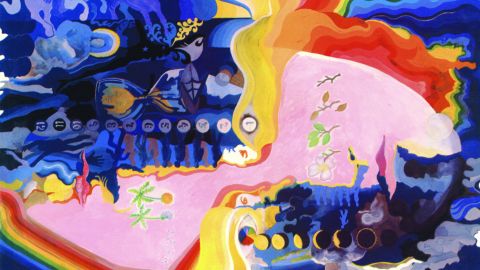 The Moody Blues tend to slip under the radar when caps are doffed to 70s/80s giants. Three UK chart-topping albums and two (different ones) in the US, where they still reached the Top 10 as recently as 1986, is extraordinary going by any yardstick.

This second album marked the arrival of singer Justin Hayward and bassist John Lodge. Inspired by The Beatles’ pioneering studio work on Revolver, and the purchase of a Mellotron which would define their glory years, it set up the Moody Blues for a career that still thrives today.

Days Of Future Passed is a concept album loosely detailing a working day and, equally revolutionary at the time, features the London Festival Orchestra and two spoken poems by drummer Graeme Edge. With hindsight it’s dwarfed by Hayward’s Nights In White Satin – and the song’s over-familiarity should not disguise what an epochal pop moment it was – but it wasn’t a US hit until 1972, so the album went Top 10 there on the strength of the road-honed Peak Hour and the lavishly layered Dawn Is A Feeling.

This edition includes three mixes of the album, a mountain of extra tracks including an intriguing take on Don’t Let Me Be Misunderstood and a three-song 1968 set from a French television show in sparkling black and white.

For all its of-its-time touches, Days Of Future Passed’s sheer craft makes it timeless. Frankly, it’s hard to think of a band whose rehabilitation is so belated.