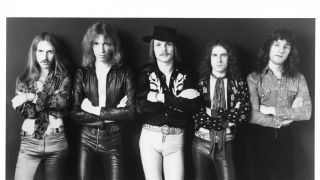 By late 1975, almost 10 years after they’d formed in Hanover, the Scorpions were finally on the verge of breaking out of their native Germany and becoming a truly international band. A large part of this was down to their third album, In Trance, which was a significant stepping stone between their earlier, more naïve albums and their subsequent heavier sound.

Key to the album’s success was the title track. A dark, psychedelic-tinged ballad with a steely backbone, it sounds like nothing they have recorded before or since. A true connoisseur’s favourite, it’s telling that it remains in the Scorpions’ set-list today.

The beginnings of the song, one that has been played so many times in clubs and arenas around the world, are unusual. Meine and rhythm guitarist Rudolf Schenker came up with the idea for In Trance as they filled downtime before a gig in a church in the Belgian town of Ligneuville.

“That’s correct,” Schenker recalls. “I already had parts of the song, but the atmosphere in that place was unbelievable. Klaus and I put everything together during the sound-check. Being in the church provided the kick for us to do something very special.”

‘Uli’ is Ulrich Jon Roth, the band’s flamboyant, Hendrix-obsessed lead guitarist between 1973 and 1978. Today he admits that he initially had reservations about the song.

“Back then I felt it was a little too bare with one lead guitar,” says Roth, who plays an uncharacteristically minimalist guitar solo on the track. “I don’t think of it as a solo. It’s more like a change of tone. When he heard the trills and the harmonic parts, our producer, Dieter Dierks, said: ‘Oh, this is like Debussy.’ It wasn’t supposed to be anything flashy. I was trying to reflect the state of mind of the song.”

The ‘state of mind’ he refers to was provided by Klaus Meine, who wrote the lyrics: a fractured meditation on trying to control your excesses, whether physical or mental. Meine sings about taking ‘too much on a Saturday night’, before declaring: ‘I wanna stop this life.’

Schenker say that he knows exactly what was going through the singer’s mind when he wrote it. “It’s about trying to get into the middle of life – not the extreme left or right,” he explains. “You can get stuck in a rut, doing things you don’t like, over and over again. It had to do with drinking, maybe.”

Both the song and the album provided a tipping point for the Scorpions. The album found them embracing tighter, more commercial arrangements. This was partly down to new producer Dieter Dierks, who would go on to help mastermind the band’s long run of internationally successful albums that started in the late 70s and ran through much of the 80s. Where Kraftwerk producer Conny Plank had given the Scorpions’ debut album Lonesome Crow an experimental sheen, and the band themselves had produced follow-up Fly To The Rainbow, Dierks was able to successfully bring together the two distinct halves of the band.

“On one side there was Uli, who was more Hendrix-orientated, and on the other were the songs by Klaus and myself,” says Schenker. “Dieter had a great ear, and could put the two styles together to make a very spicy sound.”

In Trance also ushered in another era for the Scorpions, with the first of a number of controversial album sleeves. This one featured a scantily-clad blonde squatting over a white Stratocaster, with one of her breasts clearly visible [this ‘wardrobe malfunction’ was airbrushed out on some later pressings]. As the owner of said guitar, Roth subsequently expressed his shame at the photograph – though Schenker says it was Roth who actually suggested it.

“It was his idea,” says an unrepentant Schenker. “It was a great sleeve for us. It’s sexy, it’s mystical and above all it’s not brutal.” Scorpions – also including bassist Francis Buchholz and drummer Rudy Lenners – made their debut UK appearances on the back of In Trance. The tour included shows at both the Marquee club and The Roundhouse in London, as well as a gig at Barbarella’s in Birmingham, where they were due to support fledgling punk upstarts The Damned – at least until the German band took one look at the audience, got back in their cars and drove off.

Amusingly, Schenker recalls even stranger scenes at Liverpool’s famous Cavern club on the same tour, where drunken fans urinated on the PA.

“We had never seen anything like it,” he says. “We didn’t come on stage until one o’clock in the morning, and some fans had been drinking all evening. They were pissing in the corners of the room, everywhere.” Thankfully there was no repeat of that when the band recorded In Trance’s title track for the MTV Unplugged album in Athens in September 2013.

Uli Jon Roth – who quit the band in 1978, unhappy with the more commercial, US-friendly path they were plotting – has also revived the song for shows at which he played songs from the Scorpions’ first five albums. After 40 years, the man who was initially unconvinced by the song has finally come round to it. “I’ve really grown to like it the way we do it now,” he says. “We double up all of the harmonies, and it has the right kind of groove.”

The Scorpions: Don't quit while you're ahead