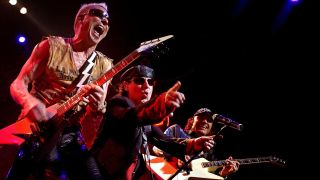 In 2007, Scorpions frontman Klaus Meine told Classic Rock: “We want to end on a high, to keep going and find a moment to have a nice way out of this madness.”

The band’s 2012 documentary film Forever And A Day charted their ascent from the back streets of Hanover to the main stages of Europe, America and beyond, and was planned to culminate with their retirement. Five years later they’re still going strong, and about to embark on a tour of the US with Megadeth. What went right?

“We always say as long as the Rolling Stones can do it, we can do it,” guitarist Matthias Jabs says, laughing.

Jabs still has something of the ‘new boy’ about him, even though he joined the band before the recording of 1979’s Lovedrive album. “They don’t seem to stop! I’m going to see them in Hamburg in September so let’s see what shape they’re in. But as long as they keep doing it, we have to keep our promise alive.”

Jabs turns 62 this October, bandleader Rudolf Schenker has just had his 68th birthday and Meine is 70 next May. Schenker doesn’t bother celebrating, his rationale being that “in this rock’n’roll world, where I’m still alive, every day is a happy birthday”.

“We’ve got Mikkey Dee now,” he says, the former Motörhead drummer having replaced James Kottak, who allowed his penchant for alcohol to get the better of him. “He fits perfectly in the band. We fly together, we sit together after concerts, we have dinner together. We’re enjoying it so much. The music is still working for us, and the fans are still there. That’s the best birthday I can think of.”

“It’s more relaxed than it ever was,” Jabs says in agreement. “Paweł [Mciwoda, bass] and Mikkey get on so well, which is very important. There is a fantastic atmosphere between the five of us, and musically we’re on top form.”

Ageing might seem a gloomy topic, but the Scorpions manage to invest it with the energy and good humour they bring to their music.

“I just turned sixty-nine, Meine says. “On my next birthday there will be a number seven, and unfortunately around that age so many great artists left us. It’s really sad to see that generation come to an end.”

With so many recent rock deaths, including Lemmy, Bowie and Prince, have they started to worry about their own mortality?

“Of course – when you’re over sixty, the chances [of dying] are greater than when you’re forty,” Schenker reasons, “but I don’t think about it at all.”

He is, however, concerned about the consequent future of rock. “It’s sad to see so many great musicians die in recent years, and it will happen even more because people only live so long. One day it will hit the Stones, and the next day the Scorpions. And when we’re all gone there’ll be nothing authentic left regarding rock music. When all the great artists and great bands are dead, automatically this [rock’n’roll] is all over. Then you’ll have either copycats or just the new stuff.”

Schenker might not lose much sleep about death, but you can’t help wondering if he worries about how long his rift with his younger brother Michael will continue. It was in 2016 that stories started to appear about Michael’s “mistrust” of the Scorpions, for whom he played lead guitar in the early days, accusing them of “fooling people” by carrying on touring after their farewell concerts and accusing his elder brother of not giving him the credit he’s due for his contribution to Scorpions’ 70s albums.

Are Meine and Jabs aware of the brotherly spat?

Ditto Jabs. “Um, actually, I don’t really know what was going on there,” he says. “I read a few things and thought it was as stupid as it could get, then I forgot about it. I don’t know if anything has changed. Nobody talks abut it here.”

“I saw some of [the arguing] on the internet,” Meine adds. “I don’t know what Michael is up to.”

He pauses, then draws parallels with notorious rock sibling rivalries past. “I remember when we saw The Kinks in the sixties, the Davies brothers were fighting all the time,” he says with a chuckle. “That’s just the way it is sometimes with brothers. But what’s going on between Rudolf and Michael I can’t say, because I don’t understand it. But it doesn’t have any effect on Scorpions at all.”

Has Meine ever had a fight with one of the other band members?

“We have our little fights about set-lists or production, and sometimes, yeah, it can be a little rough. But that’s the way it is with Scorpions: they put out this stinger and this little fight, then it’s respect and a big hug.”

Besides, don’t most bands worth their salt thrive on creative tension and the odd spot of argy-bargy.

“You’re right, it’s not sunshine every day,” says Jabs. He doesn’t make it explicit, but he seems to consider Michael Schenker’s decision to air his dirty laundry in public inappropriate. “Everybody should be aware of that,” he says pointedly, “but unfortunately it’s not always the case.”

It’s down to Rudolf to set the matter straight.

“I think because my brother is so good a guitar player, he never took care about business,” he muses of Michael’s somewhat less consistent trajectory from Scorpions to UFO to the Michael Schenker Group and beyond. “He is such a fantastic guitar player, but he changed horses so often and had a little less light in the Scorpions, who always went through everything together, like with Klaus and me.

“His mistake was that he didn’t talk to me first before doing interviews,” he says of Michael’s attacks on him in the press. “I would never say a bad word about him, and whatever he says is fine with me.

“I think he has the idea that I have a much better life than him. Of course that’s depressing for him. But that’s how it is. What can I say? I love my brother, he’s an amazing guitar player. But it’s like my father said: ‘Where there is much light, there are big shadows.’

Arguably more than any other German band apart from Kraftwerk, the Scorpions became unofficial ambassadors for their country, helping to improve its reputation in the eyes of the world.

“Absolutely right,” Meine affirms. “We always went out there feeling like our parents’ generation was at war with the rest of the world. So yes, in a way we feel like we go out and make a statement for a more peaceful world.”

“We wanted to show the Russian people that Germany was not coming with tanks and war but with music and love,” Schenker says of the Scorpions’ historic 1988 shows in the former USSR.

Talking of love… Presumably the Scorpions’ days of amorous (and, for that matter, narcotic) misadventures on the road are long gone?

“That is history, and has been for decades,” Jabs says. “That all ended with the eighties. We’ve seen and done it all, but we’re good now. We like to keep healthy, although we don’t need to go to the gym – being on stage is exercise enough.”

Meine agrees that their days of bacchanalian excess are in the past, although even then they tended not to publicise their misdemeanours.

“We had our crazy road years when we threw TVs out of the window, but we didn’t call the press,” he says. “There was a lot of booze and having fun. Of course, for whoever was touring in the eighties, drugs were around everywhere, and Scorpions were no exception. It was a question of: do you want to go down this road and be part of this drugs thing, or do you stay away from it? I can only say for myself, but when I lost my voice in the early eighties around the time of the Blackout album, and then got cured and could sing again, for me to fuck it all up again with drugs was no option at all.”

Clearly, the days of the band doing their famous pyramid are also no more. “No way,” Meine says, laughing, appalled at the thought of having to recreate their trademark on-stage configuration one more time for posterity.

As for Schenker (“Mister Fitness”, as the singer calls him), he has yoga and meditation these days to keep him on the straight and narrow.

“When we were doing Lovedrive, Blackout and Love At First Sting, it was like surfing on a big wave,” he says of Scorpions’ early-80s heyday and their propensity at the time for carnal indulgence. He cites the lyrics to their hugely popular 1984 anthem Rock You Like A Hurricane, all too aware of the sexist, demeaning period vernacular. “That was part of our thinking, of how we saw rock’n’roll: ‘What is wrong with another sin?/The bitch is hungry, she needs to tell/So give her inches and feed her well.’ It was before Aids, the perfect rock’n’roll world.

“There are still drugs and groupies [available],” he says (like Meine and Jabs he’s a happily married man), “but we don’t need it any more, because we know it destroys your energy and creativity.”

The Scorpions are clever enough to know by now how to adapt and survive. That’s why they’re still here, albeit quite different from the experimental creatures whose 1972 debut album Lonesome Crow was produced by Krautrock alchemist Conny Plank. It’s quite some distance from early-years guitarist Uli Roth, Speedy’s Coming and The Sails Of Charon to the party starters of Lovedrive and Blackout, and the epic balladeers of Wind Of Change. But the point with the Scorpions is to embrace the changes.

“We’ve had periods where everybody is telling us: ‘Oh, what you’re doing is shit,’” Jabs says with a laugh, “or when the record company doesn’t want to know and radio doesn’t play you. Then you try something different, and ten years later they tell you the eighties were the greatest. We are more like an eighties band than we are a seventies band; the Uli period is too different. Since I joined, the band found their style, the one that made them internationally successful, because it was more commercial. The nineties were difficult, and then we found ourselves again in the two-thousands. And now we are back to what we developed in the eighties.”

There are advocates of early-70s Scorpions, while others prefer their 80s incarnation. Most, though, would agree that they lost their way a bit during the grunge era, then found themselves again in the new century. But how about the Scorpions themselves? Do they have a favourite phase?

“The best one is the eighties, no question about it,” Schenker says. “The time and the music were right. Now the time is great again. Why? Because after we turned round three hundred and sixty degrees, we’ve come back out, and we’re still here. So I’d say the eighties and now.”

Meine is similarly ambivalent: “A lot of people would think it would be the eighties, but life is still so good. I’m very happy in the here and now.”

The Scorpions are currently on tour. See www.the-scorpions.com/tour for full dates.

Big City Nights, Loving You Sunday Morning: The Turbulent Story Of The Scorpions