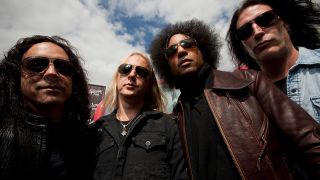 For both fans and bandmates, the fatal 2002 overdose of singer Layne Staley seemed to herald the end of the road for Alice In Chains. Though other members of the band had struggled with drug and alcohol dependency, Layne’s had been the most public at the time (in 2011, original bassist Mike Starr would also fatally overdose), and sadly, few were surprised by the tragedy. The band hadn’t released new material for seven years and so Layne’s passing only confirmed what had long been the de facto truth — that Alice In Chains were all but done.

Four more years passed before AIC eventually re-emerged for a string of benefit concerts, one-offs and small tours. To step into the lead vocalist role, the band brought in Comes With The Fall vocalist William DuVall. Founding guitarist Jerry Cantrell tells us, “We knew that what [William] was going to have to go through was really tough – stepping into a band that has a history and in some people’s eyes, replace a guy who is beloved and as creatively badass as Layne was. Our view was that Layne’s irreplaceable. We weren’t trying to replace him, we were trying to move on and add William as a creative partner and a member to make the band work. I thought he could do it and he proved me right. He’s a big reason why we could move forward.”

Not only was the role fraught with the weight of the band’s history, but stylistically, Alice In Chains needed a vocalist who could weave smoothly into their model of dual lead vocals. In his first session with the band, DuVall dispelled any doubts in a matter of minutes. “William was a friend of mine who had been a part of my solo band,” Jerry says, “and I thought he could do a really good job at it. I knew he was really talented and a hard worker. He’s a lifer, like we are, so I invited him to come down and jam with us and that was pretty much it. He sang a couple of tunes and the guys kind of looked at me and I said, ‘Yeah, he’s pretty fucking badass!’”

As the band toured the US and Japan, congealing as both musicians and friends, new material began to emerge. “We started coming up with shit because we’re creative guys and that’s what we do,” Jerry says. With their creative energies engaged and their passion for writing new music reignited, the guys slowly embraced the possibility of a new Alice in Chains album, self-funding the project so they could take their time and produce the music as they felt it should be captured. “Our good friend Dave Grohl was kind enough to let us hang out in his studio for three or four months and record the bulk of it there,” Jerry says. “We were just doing it for us, to see where we were and to see if we could be a creative force with this line-up like we were before. We had a certain high water mark that it had to meet and through that process, we realised that we were doing that and it felt good and it felt right, so that’s how that record came about.”

The record, of course, was 2009’s Black Gives Way To Blue, recorded a full 14 years after their last studio album, 1995’s Alice In Chains. A triumphant return to form, it drew rapturous acclaim from critics and fans alike, easily launching into the Billboard Top 10, receiving gold certification eight months later and scoring not one but two Grammy nominations. Looking back on the period as both exhilarating and somewhat surreal, Jerry recalls the moment when he realised that they had tapped into something very special: “[It was] when I wrote the title track, Black Gives Way To Blue. That really set it in stone because we had to properly address the situation and say goodbye to our friend. We had done it privately but if we were going to do this, we had to do it publicly. It’s a beautiful song and it’s still really tough for me to listen to. It was really hard to sing because it was so emotional.”

Songs of sadness and despair underpinned the band’s catalogue and yet Black Gives Way To Blue saw Cantrell and the band strike an even deeper level of intimacy and vulnerability. “I was speaking so honestly and from my heart and the band’s collective heart, saying goodbye to Layne. That’s what that song is and that’s why we called it that. When I wrote that song it was like an emotional hairball that I had to cough up – it was something I hadn’t talked about much in that much open pain and mourning and love for the guy and I put it all into that tune. ”

A sparse, sombre ballad that would close the album, Jerry felt that it needed one more piece. Although it was a bit of a longshot, Jerry knew it was one worth taking. “I sent that song to Elton John and I asked him to play piano on it. He’s probably my earliest influence as far as wanting to be in a band or be a songwriter. That track really touched him – what it was for and the whole meaning behind it, as both a goodbye and a new beginning. The first words on the record are, ‘Hope, a new beginning,’ and the last line is ‘I’ll remember you.’”

Moved by the song’s spectral elegance, Elton John agreed to add his piano parts, and so the band met him in a studio in Las Vegas for him to lay down his track. Jerry recalls, “We were all so flattered, not only for creative reasons – we all grew up listening to him, so it was a big deal. We had done our parts for tracking it and it actually was the last song that we finished because it happened when Elton was available. We flew to Vegas to track with him and he was watching a football match. He was a little late because the game was still going on and we got there before he did and his piano was already set up. I walked past and saw the lyrics and the chart for the song and I just stopped and was like, ‘Holy shit... what a cool thing.’”

Finishing the album on that particular song, watching Sir Elton adding the final track in a small Vegas studio, offered a fitting end to the project. “It meant the world to us. He’s been a friend that we’ve gotten closer and closer to. We’ve even done a show together. He’s always cared a lot about what’s going on, not only with us but with everyone. He’s a real fan of music, so it was a pretty heavy deal for us.”

Today the song remains one of Jerry’s personal favourites and from an emotional standpoint, one of the heaviest he’s ever written. “We’re not really known for writing light tunes”, he says with a chuckle, “but yeah, I’d never written anything like that because my friend had never died before. And the band had never done a song like that before because we’d never been faced with that question of what it would take to restart the band. We lost a really big part of our band, let alone our best friend and my creative partner as a writer, when Layne passed. So that was a question that had to be answered. It’s a unique song, for sure.”