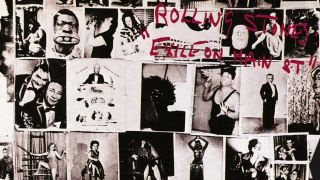 The recording of Exile On Main Street was a seedy affair. Laid down in the basement of Keith Richards’ Nellcôte mansion on the Côte d’Azur in France, as vast quantities of heroin and a succession of opiated hangers-on blew through the premises, the 1972 classic album caught the Stones at their hedonist best.

It’s fitting then, that the sleeve explored similar themes of self-abuse and chaos. “The general tone of the time was one of anarchy,” designer John Van Hamersveld explains. “Drug dealers and freaks and crazy people left over from the 60s – all defiant and distorted.”

Hamersveld had spent the previous decade in high demand as a pop artist, his most famous work undoubtedly the poster he contributed to the 1966 surf documentary The Endless Summer. More significantly for Rolling Stones fans, he also created the ‘Grinning Johnny’ image that is said to have inspired the band’s iconic tongue logo. The designer was already working on a project with the Stones in Los Angeles when he and noted Swiss photographer Robert Frank were signed up as the creative team for their next album.

Although it’s widely assumed to be a collage, the main shot was actually a photo of the wall of a Route 66 tattoo parlour, taken by Frank as he passed through in 1950. To underline the key point – that the disreputable, drug-addled and tax-exiled Stones were as much outsiders as the circus freaks – the reverse of the sleeve had shots of the band members assembled in a similar collage effect.

When Stones manager Marshall Chess asked Van Hamersveld to select an image from the cover of promotional purposes, there was one obvious choice. “I said: ‘Why don’t we take the guy with the balls in his mouth?’” the designer recalls. “That is the most amazing photo I’ve ever seen.”

It seems the Stones were please with the Exile… cover, as they hired Frank to film their 1972 US tour.

The sleeve was soon influencing the next generation of anarchists. “The Stones’ Exile… package set the image of punk,” former Sex Pistols frontman John Lydon admitted in 1984 – the same year that he collaborated with Van Hamersveld on the cover of his band PiL’s This Is What You Want… This Is What You Get.