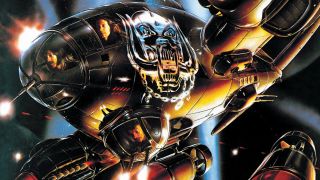 Think of rock logos and they don’t come more iconic than Snaggletooth, Motörhead’s fanged mascot created by artist Joe Petagno in 1977. Yet the band’s most spectacular sleeve art was on 1979’s Bomber: a winged chunk of customised heavy metal dreamed up by illustrator Adrian Chesterman. Lemmy, ‘Fast’ Eddie Clarke and a bug-eyed Phil ‘Philthy Animal’ Taylor are shown bearing down from the gunner cockpits of a Jerry fighter in the Blitz. Fascinated by military regalia, Lemmy insisted the plane be German: “The bad guys make all the best shit.”

Chesterman explains: “I suggested the Heinkel plane. They wanted this photo-realistic effect, so I designed the thing with the detached bomb coming towards you.

“I worked in airbrush in black and white, which I would then tint,” he adds. “That’s why my work always looked very doomy. To get the lighting right, I got a little Airfix kit of a Heinkel 111, made it up and sprayed it black.” He then took photos to get the reflection underneath. “When you work realistically, you’ve got to have a realistic reference.”

Chesterman took the call on the Friday and met up with the band the next day.

“They wanted the artwork within a week,” he laughs. “I suggested meeting them at midday. I don’t they were accustomed to getting up that early, because they all looked decidedly grumpy. Phil had a tin of Special Brew in his hand. The pictures of them in the plane were so small, I needed passport-sized photographs, which I cut out and painted in. I had to get them to snarl and look like they were shooting machine guns. Lemmy is curling his lip up. And Phil just had that expression permanently.”

Despite Clarke being “a bit pissed off” at his “girly hair”, Motörhead loved it. The effect was completed by a chrome Snaggletooth on the side of the plane. Such was the sleeve’s impact that the band insisted on the now infamous Bomber lighting rig for their accompanying tour – a 40ft Heinkel replica that moved from side to side over the stage.

“It’s the most famous cover I’ve ever done,” Chesterman says. “My mum had the original Bomber artwork on her wall for a while. She was very religious, so she’d have this Methodist circle around it. Then there’d be Lemmy and Philthy Animal hanging out of this picture, and the vicar sitting underneath.”

Motorhead 1979: the inside story of Overkill and Bomber