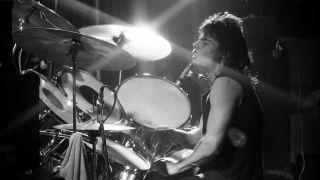 Phil Taylor, AKA ‘Philthy Animal’, the drummer of Motörhead from 1975-1984 and 1987-1992, died of liver failure on Wednesday. He was 61 years old and had been in poor health for several years since an operation to repair a brain aneurism.

Lemmy Kilmister issued a statement: “I’m devastated because one of my best friends died yesterday. I miss him already. Phil Taylor, or Filthy Animal, was our drummer twice in our career. Now he’s died and it really pisses me off that they take somebody like him and leave George Bush alive. So muse on that. First we lose Würzel [guitarist, who died in 2011] and now Filthy, it’s a shame, man. I think this rock‘n’roll business might be bad for the human life. Oh well.”

Tempted by the possibility of playing on the band’s debut album, Chesterfield-born Taylor succeeded original Motörhead drummer Lucas Fox in ’75 after making the life-changing offer of a lift to Rockfield Studios to bassist/vocalist Kilmister, who didn’t drive. Motörhead were going through a rough phase with Fox, and Lemmy and Taylor had sat up all night together doing heaven knows what. When Taylor boasted of being a drummer, offering a demonstration to prove the point, guitarist Larry Wallis is said to have told Kilmister: “What a horrible little cunt. He’s perfect.”

Taylor would certainly prove a live-wire character, breaking his neck on the eve of a tour in 1980, but playing on supported by a brace.

“That was roadie games at 5am, lifting each other above their heads,” remembers ‘Fast’ Eddie Clarke, the guitarist who would replace Wallis to complete a terrorising three-man line-up responsible for such hits as Ace Of Spades, Bomber and Iron Fist. “Of course, Phil fell on his head. We had to cancel quite a few things due to his habit of punching and kicking things.”

Philthy indeed provided much of early Motörhead’s unpredictability and spark. After his band Saxon had supported on Motörhead’s Bomber tour, guitarist Graham Oliver recalls visiting the house that Taylor and Clarke shared and being shaken by the pair’s habit of “fighting for real and then [suddenly becoming] mates again – I saw it happen loads times”.

“Yeah we liked a good punch-up, especially at the beginning of the band,” Clarke laughs now. “It was a testament to our friendship that we would be rolling around on the floor and then get up, go to the bar and have a drink.”

A supremely underrated drummer, Taylor later expressed bewilderment when his mix of power and precision rendered him and Motörhead talismans of the thrash-metal movement. It was his double-bass kit performance on the title track of the 1979 album Overkill that caused Metallica’s Lars Ulrich to remark: “When I first heard [Overkill, it] blew my head off”, though in fact the now iconic song came about almost by accident.

“Phil had splashed out to replace his kit after we got our deal with Bronze Records, and he started playing the new bass drum at the same time as the old one,” Clarke relates fondly. “It made an amazing noise so Lem and I started playing along in E, but it was Phil’s energy that made Overkill happen.”

Taylor quit in 1984, effectively leaving Motörhead a one-man band, before Lemmy rebuilt the line-up to continue. After a fleeting spell with Waysted and the formation of the short-lived Operator with guitarist Brian Robertson, plus some touring work with Frankie Miller, he rejoined three years later for the Rock ‘N’ Roll album but would be dismissed during the recording of 1992’s March Or Die.

Post-Motörhead, Taylor went on to perform with little known minnows The Web Of Spider and helped out live with New York thrashers Overkill, collaborating for a while with ex-W.A.S.P. guitarist Chris Holmes and also recording alongside Mick Farren and the Deviants, but nothing seemed to stick.

“I always got the feeling [that I had] done this before,” Taylor said in 2005 when asked why he seemed to lose interest after joining other groups. “It may sound a bit clichéd, or you may not want to believe me, but I just can’t bring myself to play if I’m going through the motions.”

“I don’t think that Phil ever got over [being ‘let go’ by] Motörhead, that’s my belief,” theorises Clarke. “It left him very bitter and twisted. I know, because I experienced something very similar. The biggest tragedy of all was that losing his mojo would cut short his playing career.”

A couple of years ago Taylor had stayed with Clarke upon the former’s return to the UK from Los Angeles, where he’d lived for a while.

“This was after the aneurism,” Clarke relates. “He was still there but it took him a while to digest what you were saying, which was sad as he’d always been so switched-on.”

In November 2014, Taylor and Clarke joined Motörhead onstage for a version of Ace Of Spades at a gig in Birmingham. Eddie played guitar as usual but by then Filthy was restricted to waving to the crowd.

“Lemmy really loved Philthy, and so did I,” Clarke sighs. “The way that he deteriorated was such a shame.”