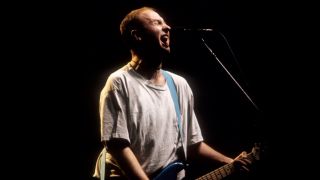 A mighty waterfall of Beatle-ish melodies and grunge dynamics, Bob Mould’s finest power-pop anthem arrived out of a clear blue sky, plopping into the former Hüsker Dü frontman’s mental inbox on some jingle-jangle morning in the summer of 1991.

“It was this dream song that just turned up as I was waking up one morning,” Mould recalls. “It came to me fully formed, and then it’s just all the baubles that make it that crazy baroque band thing. All that was pretty much in my head too, but you have to sit down and make these baubles shine. That’s the production stuff.”

Named after the architecturally stunning structure that towers over the Colorado River on the border between Arizona and Nevada, Hoover Dam was written just as Mould’s career was in free fall. Hüsker Dü, the groundbreaking alternative rock band he’d co-founded in Minneapolis at the end of the 70s, had acrimoniously split in 1987. Laid low by bad business decisions and poor sales for his 1990 solo album Black Sheets Of Rain, Mould fired his manager, accountants and attorney in early 1991. In March he and his then-partner Kevin O’Neill relocated from downtown Manhattan to a massive loft in run-down Williamsburg. Hoover Dam came together in that apartment.

In a bid to salvage his ailing career, Mould spent much of 1991 on punishing but lucrative solo tours, building up his savings and stockpiling new songs. He often found himself sharing a festival bill with an exciting young band called Nirvana, who even briefly considered him as a potential producer for Nevermind.

Meanwhile, his own post-hardcore songwriting took a more melodic turn, drawing on childhood heroes such as the Beach Boys and The Byrds. Shaking off the bleak introspection of his solo albums Workbook and Black Sheets Of Rain, Mould began forging the muscular sunshine-grunge sound that would define his next project, Sugar.

“Sugar was really the third solo record,” Mould recalls. “It wasn’t a reaction to anything, it was more me just digging in, writing songs all the time, lightening up after Black Sheets Of Rain, looking more at the pop side. Cheap Trick’s In Color was definitely a big touchstone for that record.”

The lyric to Hoover Dam begins as reportage and quickly becomes metaphor. ‘Standing on the edge of the Hoover Dam’ is a great cinematic opening, evoking a sense of instant vertigo and imminent risk. “I’m just taking in the majesty of it,” says Mould. “It’s pretty overwhelming. That’s just like literally taking notes, then building this song around it.”

As the lyric unfolds, Mould expands on the widescreen imagery to suggest a narrator caught ‘between two states of mind’, just as the dam straddles the line between Nevada and Arizona. He runs through his options: getting washed away by the Mississippi river, buried under volcanic lava, or sucked down the plughole to hell. And he makes them all sound strangely cheerful.

“The Mississippi divides the country,” Mould explains. “It’s using metaphor to create this back-and-forth thing, where you are on one side of the line or another. The biggest supposition I’ve heard from music critics is: Is this a suicide song? With the Hoover Dam, if you slide down you’re dead. Or with the Mississippi, if you go in you’re going to end up at the bottom. It just tied those images together. But it’s a songwriter song, not a confessional.”

As his musical rebirth began to take shape, Mould signed separate deals with two indie labels: Rykodisc in the US and the fabled Creation in London. The molten noise-rock euphoria of Loveless by Creation labelmates My Bloody Valentine would become another major influence on the lysergic, lightly psychedelic, honey-churning sound of Sugar.

To complete his nascent new band, Mould brought in David Barbe and Malcolm Travis from his nationwide network of indie-rock friends and former studio collaborators, and initial rehearsals began in January 1992. The trio selected their stage name only when they were asked to play an unplanned debut show, filling in for a last-minute cancellation. “We needed a band name,” Mould says. “We were having breakfast and there was a pack of sugar on the table, so we chose that. Up until that point it would have been a Bob Mould record.”

Released in September 1992, Copper Blue became a critical smash and transatlantic Top 10 hit, cementing Mould’s reputation as the godfather of grunge. With 300,000 sales and counting, the album remains his all-time best-seller.

“It was right record, right time,” he says. “American hardcore and alternative rock set the stage for bands in the late eighties like Pixies and Nirvana. Then Nevermind set the stage for an album like Copper Blue.”

Hoover Dam wasn’t chosen as one of the album’s three singles. Yet it still became one of Mould’s best-loved signature anthems, and remains an obligatory fixture in his live set to this day.

“It sounds like I wrote it last week,” he says. “It really does. It was such an amazing time. I was digging myself out of a hole. I had to work my ass off, tour all the time, get enough money to make a living. But then, by the time the meal was cooked, the table was already set.”