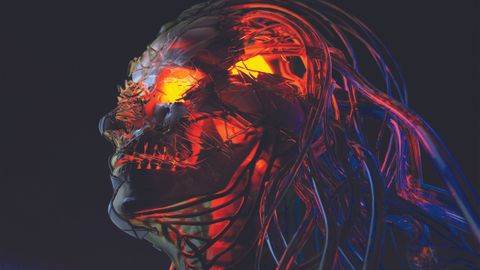 It’s a fair estimate that at least 75% of the bands who have emerged in the last decade have little defence over their blatant pilfering of Meshuggah’s iconic guitar tone and polyrhythmic complexity. But as well as the Swedish masterminds, there’s a good chance bands within the tech and prog Venn diagram owe an immeasurable debt to British sextet Sikth, whose 2003 debut, The Trees Are Dead & Dried Out Wait For Something Wild, and its follow-up, Death Of A Dead Day, laid down a blueprint of rhythmic acrobatics, frenzied riffing and kaleidoscopic lunacy that was, bewilderingly, overlooked at the time.

Sikth’s corpse was casually scavenged for years after their demise, so it was therefore a relief to see their 2014 return greeted with such enthusiasm, with successful tours and an EP, Opacities, which showed the band could still deploy the style and skill that many had tried to copy but never matched. This individualism was due in large part to the abstract dual vocals of Mikee Goodman and Justin Hill, with the latter’s departure last year providing a concern ahead of their full-length comeback. Yet within the opening minutes of Vivid it’s clear new vocalist Joe Rosser, who helms guitarist Graham ‘Pin’ Pinney’s excellent Aliases venture, has both the versatility and soaring pipes to trade off Mikee’s scattershot approach. Three tracks give Mikee the chance to indulge in some absorbing poetic excursions that venture down all manner of murky alleyways backed by subtle ambience, meaning there are only nine songs proper, all of which need multiple plays to even begin to decipher the twists and turns, abstract imagery and riveting idiosyncrasies. One of British metal’s finest drum and bass combos, James Leach and Dan ‘Loord’ Foord, jab and coerce each track through multiple avenues, James’s vibrant strings sitting high in the mix to rebound against the trademark guitar interplay of Pin and Dan Weller that chop and duel with fiendish imagination. Whether brandishing a flurry of notes on Century Of The Narcissist? orCracks Of Light’s labyrinth of fast picking and dreamy meandering that features longtime proponent Periphery’s Spencer Sotelo, they’re as potent as the wild, histrionic vocals of the debut, yet with the more reserved metallic punch of Death Of A Dead Day onwards.

Yet while the dizzying musicianship and density of notes are expected, Sikth’s appeal has always been in their adeptness at melding all these ideas into something tangible, more often than not with melodies that constrict around your senses and refuse to let go. Whether it’s the seismic bounce of The Aura, the bonkers spats of Ride The Illusion that threaten to veer off the tracks or the brooding slow-burn of Golden Cufflinks, Sikth deploy irresistible hooks more capably than ever before, keeping you anchored and able to experience the cerebral brushstrokes in all their glory.

Given how effortlessly Sikth manage to blend their surrealist tangents into a such a perversely addictive combination, you wonder why The Future In Whose Eyes? is perhaps lacking that one defiant, nuclear blow to make up for lost time and thrust them to the dizzying heights their limited discography should have afforded them. Now firmly back in the saddle, that surely must be the goal for such a wildly ambitious and groundbreaking band who have again managed to defy expectations completely on their own terms.