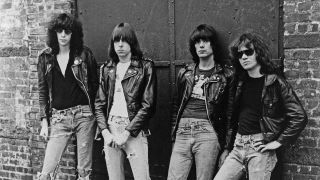 Rocket To Russia is peak Ramones. It’s the album that should have catapulted them into the mainstream, and a collection the nestles comfortably alongside the likes of London Calling and Never Mind The Bollocks in punk’s spiky pantheon.

Below, the albums producer Ed Stasium looks back at the 13 classic tracks that made up the original album.

In my humble opinion the best opening track on any of the Ramones LP’s. It seizes ones attention with Johnny’s relentlessly ripping guitar, followed by Tommy and Dee Dee’s powerhouse churning, then Joey takes us on a one-two-three-four mentally disturbed comedic journey in less than two minutes.

Inspired by the Beach Boys, this east coast answer to Surfin’ Safari was the second track that we recorded upon entering Mediasound on August 21, 1977. We had SO much fun recording the backing vocals in the isolation room in Power Station Studio A.

My favourite Ramones ballad (I Want You Around comes in second). Johnny overdubbed acoustic guitar. You can hear him counting to himself on the track during the pauses, one can distinctly hear this on the Rocket To Russia Box bonus material.

I recall the band sighting The Steve Miller Band’s success with that soft-rock California sound. We attempted to slightly mimic this by adding ‘clean’ and acoustic guitars, doubling them and featuring them in the mix as opposed Johnny’s tracking guitar. This ‘softened down’ mix was resolved in the kick-ass tracking version on the RTR Box.

This was the first song that Joey wrote. Joey’s brother Mickey taught him the chords to Alice Cooper’s I’m Eighteen and he immediately penned this tune. Joey wrote Here Today, Gone Tomorrow the following day. Whilst perusing the multi-tracks for the box set I discovered that we recorded a new version of I Don’t Care at Mediasound but we opted for the ‘B-Side’ version on the original LP. This previously unheard alternate version is included on the Rocket To Russia Box.

Sheena Is A Punk Rocker

Sheena and I Don’t Care had been recorded earlier in the year at Sundragon Studio where we had recorded Leave Home. Both songs were remixed at Power Station during the Rocket To Russia sessions. This is yet another example of the Beach Boy influence as Johnny and Tommy asked me to play a plunky guitar bit that was similar to Little Honda. In addition, we brought in my boyhood friend Michael Bonagura with Kathie Baille and Alan LaBeouf for a Beach Boys backing vocal vibe. They later became Baillie And The Boys and had several top ten country singles in the 90’s. Talk about juxtaposition!

A brilliant song about a dysfunctional tribe. Tommy and I had a blast doing the audio montage to accompany Joey and Dee Dee’s bantering in the outro section. Carefully listen for a toilet flush, lion, alarm clock, my DJ impression, a bunch of friends at an actual party, my daughter Sara crying and my dog Finchley barking. The original LP faded before Joey says “Where are my safety pins” as the band didn’t want to be associated with the hard-core punk piercing trend.

Rocket To Russia was the first record to be mixed at the new Power Station studio. At the time we had very limited ‘outboard’ gear, not one reverb plate or digital reverb device was yet in place. The very obvious reverb that one hears on this song during the Lobotomy chant sections was achieved by using a stairwell that ran the entire height of the building. We sent a tape delay to a pair of JBL 4310 speakers that were placed in the stairwell. Using a pair of Neumann U-87 mics, we returned them to the Neve desk and blended them into the mix. This method was the only reverb used during the mixing of the entire original LP. During the early 2000’s a fire inspection by the NYFD demanded that the speakers be removed as they deemed them a hazard in case of emergency.

Do You Wanna Dance

A far cry from Bobby Freeman’s latin flavoured original, this is again screaming out Beach Boys. We used their version as a template for the arrangement and the backing vocals. There is a great scene in Rock n Roll High School with Riff and the band marching down the halls of Vince Lombardi High to this song. Ironically, Mark is ‘Drum Syncing’ to Tommy’s track in the film!

I Wanna Be Well

With an intro right out of the Young Rascals I Ain’t Gonna Eat Out My Heart Anymore, the ‘brudders’ from Forest Hills take a biographical jab at their previous mind-altering outcast life sighting LSD and DDT as an early influence, topped off with daddy’s financial crisis.

I Can’t Give You Anything

Another track that the lads gave the ‘soft-rock’ treatment to as they were always hoping for a chance of radio play. If one zeros into the original mix you can hear Johnny’s classic Mosrite/Marshall sound in the centre surrounded by a double-tracked Strat played through a vintage Fender Deluxe with the addition of a Martin D-28 panned hard left/right.

I always loved the instrumental sections where they unwittingly snuck in a 2⁄4 bar amongst the 4⁄4. Johnny’s prowess for switching from muted to open guitar is in full force on this song. We edited out the last verse on the original LP mix. That version has some sweet harmonies on the last verse which remain intact on the Rocket To Russia box.

The definitive version of The Trashmen’s hit. When we recorded the track a 40 second gap was left in the breakdown section. Joey later recorded the vocal separately and we edited the tape to accommodate the length of the vocal performance.

Why Is It Always This Way

According to the original track sheet this was the first song we recorded during the Rocket To Russia sessions. On that first day in the studio Johnny brought in a 45 RPM copy of The Sex Pistols God Save The Queen and played it in the control room before we started tracking. He considered them the competition and wanted to be sure that his ripping guitar sounded superior to Steve Jones’ tone. Personally, I have a fondness for both guitarists but Johnny’s tone positively rips on Rocket To Russia.

The 40th Anniversary Edition of Rocket To Russia is available now.