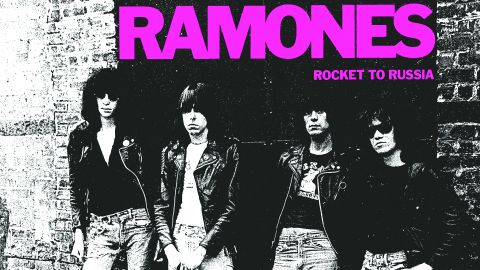 This is the album that should have broken The Ramones. Even now it’s baffling that the mainstream didn’t accept the band earlier. Compare the first Ramones album to Green Day’s Dookie (the album that finally thrust punk down the US mainstream’s throat in 1994) and frankly it’s staggering to see how little was added to the Ramones blueprint across 18 subsequent years of tail-chasing Maximum Rock ’N’ Roll stasis. Joey, Johnny, Tommy and Dee Dee not only defined, but also fine-tuned the shape of things to come. Check out Ramones’ Blitzkrieg Bop opener, and all of Dookie’s fundamentals, from chainsaw riffing to adenoidal vocals, are already in place. Across the 20 months between the release of Ramones and their third, Rocket To Russia, collection the band had changed nothing but honed everything. Tommy’s production was now as regimented as Johnny’s riffing, label Sire, sensing the potential imminence of a hitherto unlikely hit, invested a grander budget, and in compositional terms the band were getting better.

From Rockaway Beach’s genius opening couplet ‘Chewing out a rhythm on my bubble gum, the sun is out and I want some’, Rocket To Russia sounded like a hit record. That said, six months earlier it would have sounded even more like one. Its lead single Sheena Is A Punk Rocker had been around since May. Waiting until November to release the album meant it went head-to-head with Never Mind The Bollocks Here’s The Sex Pistols, and in comparison to the Pistols’ raging delinquent fury the Ramones’ 1950s-based pop classicism suddenly sounded positively archaic. So the album missed its moment, died on its arse and in the UK peaked at No.60.

But the Ramones had a secret weapon, one with which the Pistols couldn’t compete: they were an astonishing live band who could casually knock out 45 songs in an hour and a half. And reliable? Totally. So while there are 77 tracks on this 40th Anniversary edition, the demos, alternative takes and rough cuts all sound pretty much identical to their finished counterparts. The contemporary Glasgow Apollo live set, meanwhile, is a dead spit of the exemplary It’s Alive (recorded at London’s Rainbow 12 days later). By 1978’s Road To Ruin, Tommy had gone and the spell was broken, but these Ramones, captured here, remain entirely essential.