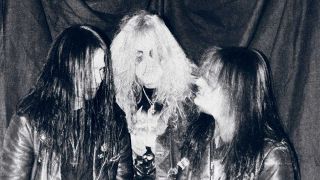 "Mayhem's story is the definitive black metal saga. It has a darkness which lies beyond most of our daily comprehensions, and a continuing influence and legacy that sees not only the genre, but also the fans, continue to be both fascinated and influenced by these true pioneers." Lars Ulrich, Metallica

“For decades, I’ve witnessed all these hacks cashing in on my band Mayhem, my music, my image, my name, my pictures, telling my story in books and documentaries, in films and magazines. It would be fine, if it weren't for the fact that it's all fucked up with the wrong things. The journalists start calling me every fucking time one of these books come out like 'What do you think of that?’ and I'm thinking I should just write a book myself and tell how it really was, to end all of this speculation and bullshit. I make music and I thought it would be easy, but it wasn't. It took well over a year. It's a lot of work, unbelievable.” Jørn ‘Necrobutcher’ Stubberud

Jørn Stubberud has now written that book. Available via Thurston Moore's Ecstatic Peace Library imprint, it's out in paperback on September 13.

It's an extraordinary, devastating story. It's a tale of suicide, its a tale of murder, it's a tale of church burnings, and it's a tale of a group of young men setting out (and succeeding) in changing the world of heavy metal forever.

There are very few bands in the history of rock’n’roll that are undeniable as genuine innovators. Mayhem is one of them.

These young men connected in a place that would subsequently galvanize a global phenomenon of one of the most radical, polarizing sub-genres of not only music but a philosophical consideration of life in relation to nature, the conflicted existence of humanity and the all consuming power of inspirational energy.

Mayhem grasped the pathos and humor in the satanic fascination of England’s great metal trio Venom who released the classic Welcome To Hell LP in 1981 (followed a year later by the scene defining Black Metal LP) from whence Mayhem named themselves after the track Mayhem With Mercy in their merciless birth in 1984. Developing from a metal spewing crew covering underground metal tunes and raw originals and releasing the legendary Pure Fucking Armageddon demo cassette (1986) followed by the classic Deathcrush EP (1987) Mayhem struck up a providential place in metal history with the 1988 inclusion of Swedish vocalist Dead, who already gained notoriety as the singer in Swedish death metal miscreants Morbid.

Dead realized Mayhem was the band he needed to be in (and, as legend has it, sent a demo to Necrobutcher in a package containing a crucified mouse)! Alongside founding members bassist Necrobutcher and guitarist Euronymous and with new drummer Hellhammer (joining around the same time as Dead) Mayhem, by 1988, was completely and utterly notorious. Ironically this line up of Mayhem, so critical in the band’s fractured lineage, can only be heard on grey area releases with the most official LP Live in Leipzig (recorded 1990) being one of the best in all its guttural, yet searing, rawness.

Dead was the person who brought the theatrical statement of wearing corpse paint in performance, not as a reference to any Kiss/Alice Cooper trope, but to express the most intimate relationship of man and nature, the living corpse howling its bloodlust. Dead was the kid who felt death as his ultimate gesture and invocation of the expulsion of self. He was truly a child of darkness in a world teeming with strange light. He saw beauty inverted as a prism into nature’s fury and chaos but he also regarded its eloquent relationship with the cycle of birth, decay and mystery. When a young person writes within his last lines, “I belong in the woods and have always done so...I'm not a human, this is just a dream and soon I will awake” it is the voice of not only a soul in desire to bleed into the earth, to be in a place his consciousness craves, so disconnected and in depression to his human form, but that of a bedeviled poet at odds with the beatific philosophy of humanitarianism. To feel remorse for Dead, the boy brutally bullied in his youth, finding shards of salvation in the alien comradery and power in Death and Black Metal, is to deny the genuine truth of a remarkable individual’s short time on Earth. His was to come and express the reality and irreality of mortification through the expression of annihilating sound and passion.

In these pages we gain access into the days and nights of one of the wildest, seriously most frightening bands in the history of amplified sound. We can see an intoxicated feeling of raw power and emotion manifest as art bleeding into reality. Within the lexicon of remorse, pain, anger, disgust and turmoil a northern air of friendship, joy and enchantment comes into play. And... all hell breaks loose.