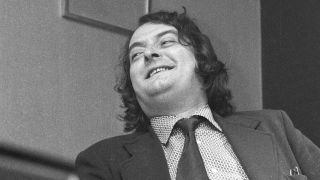 Tony Stratton-Smith was more like an old actor-manager such as Henry Irving in the way he looked after his acts and his label, Charisma, as opposed to what we think of as a classic rock manager like Don Arden or Peter Grant. Drifting into the music business in the early 60s, by the middle of the decade he’d worked with both Brian Epstein and Andrew Loog Oldham.

His first major acts, The Nice and The Bonzo Dog Doo-Dah Band, set out his stall perfectly – one of eccentric, trailblazing individuality. As Johnny Rogan wrote in his book about rock management, Starmakers And Svengalis, “Most of the record label’s distinctive charm came from Stratton-Smith’s proud paternal interest in all the artistes under his charge.”

A fervent and passionate supporter of the good life and horse racing, aside from the Charisma offices on Old Compton Street, Stratton-Smith operated out of three venues in London’s Soho: the Ship pub, the Marquee and La Chasse, just further down on Wardour Street.

Born in Birmingham in 1933, Stratton-Smith trained as a reporter. He made his name as a sports journalist on the Birmingham Gazette, and while working at The Daily Sketch, became the youngest sports editor in Fleet Street. His first publication in 1963, The Brazil Book Of Football, was packed with first-hand interviews with players such as Pelé from the previous year’s World Cup. As well as several books on football coaching, he also wrote The Rebel Nun about Mother Maria Skobtsova, who had been killed at Ravensbrück for her role in the French Resistance during the Second World War. There was clearly some depth and vision to the man.

An encounter with Brazilian composer Antonio Carlos Jobim while Stratton-Smith was covering the World Cup in Chile led to an interest in music publishing. His reputation was such that he was asked to ghostwrite Brian Epstein’s biography, A Cellarful Of Noise. Although Derek Taylor got the gig, his time with Epstein proved inspirational, and by 1965 Stratton-Smith was managing his first act, Paddy, Klaus & Gibson (featuring Beatles’ confidante Klaus Voorman), followed by singer Beryl Marsden. Hugely popular in France and admired by the cognoscenti, sadly Marsden didn’t enjoy huge mainstream success, partially due to what Stratton-Smith was later to call “a kind of Liverpudlian bloody-mindedness”.

His next acts were the hugely influential The Creation and the largely unsuccessful The Koobas. Stratton-Smith was on the verge of quitting music when he encountered The Nice. Signed to Immediate, the group were disenchanted with their manager and label owner Andrew Loog Oldham. Their keyboard player Keith Emerson asked Stratton-Smith to look after their affairs.

The Nice wanted to play bigger venues, something Stratton-Smith assisted with. However, one of the first shows he secured was the infamous Albert Hall concert in June 1968 – at the height of the Vietnam War – when Emerson burnt the US flag. Immediately, a lucrative US tour was thrown into doubt, and Stratton-Smith had to use all of his considerable charm to get the group over the water. During the group’s first show at Fillmore East, Emerson repeated the stunt, much to the consternation of the audience and promoter Bill Graham.

Impressed by his handling of The Nice, Vivian Stanshall approached Stratton-Smith to take over management of his group The Bonzo Dog Doo-Dah Band from Gerry Bron. It was a perfect marriage between people who took their work, if not themselves, seriously: Bonzos drummer ‘Legs’ Larry Smith wrote in 1993, “The eloquence of this man – the generosity – the breathlessness – those deep brown eyes – glazed with the tears of helpless, hopeless, hysterical laughter – tears that would run down Wardour Street and then flow up three flights of stairs into the La Chasse most nights.”

Stratton-Smith enjoyed a great year or so with the group, but plans were afoot to launch his own record label to complement his management career. With The Nice and the Bonzos, he had been so disenchanted dealing with labels that he wanted to run his own, based on the Motown model. With a team of trusted lieutenants such as label manager Gail Colson and her brother Glen, who would handle PR, as well as tour manager Fred Munt, and with the expertise of Terry King and Paul Conroy at the Terry King Agency to book tours, the ‘Famous Charisma Label’ was born.

Being the label owner as well as the manager was an interesting development. Would Stratton-Smith have arguments with himself in his office about how an act was performing? In that sense, he had a real 180-degree feel for his artists. Rare Bird were one of his early label/management deals, but their early promise (Sympathy was No.1 in France) soon fizzled out. However, they were to leave an indelible mark on Stratton-Smith, thanks to a recommendation from keyboard player Graham Field to Charisma’s A&R man/staff producer John Anthony to check out a young group called Genesis.

In Genesis, Stratton-Smith found a band he was able to nurture. Having briefly signed to Decca, Genesis were on the verge of collapse, with proper careers and further education beckoning, when Stratton-Smith met them in 1970. Genesis signed with Charisma despite interest from Island and Threshold. “They were polite and liked all of their affairs handled in a businesslike manner,” Stratton-Smith explained. “They were never one of the lads. Genesis had dignity.”

“He was a larger-than-life character – jovial and a big drinker – and he loved music,” said Mike Rutherford. “When it came to Genesis, what he loved was the emotion and power of our classical chords.”

There was much time invested in Genesis as they went through much turbulence before finding an even keel. “Tony Stratton-Smith, our manager, is first class,” Peter Gabriel told Melody Maker in April 1971. “The situation before he came along was totally impossible. When we found him and vice versa, everything moved into a new scene.”

“Strat was a very passionate man who backed the acts he signed and managed both financially and emotionally,” said Charisma’s booking agent Paul Conroy. “He gave a chance for musicians to develop and forge careers. With Genesis the bean counters almost called time, but Strat managed to keep them afloat before they broke.”

Much to his chagrin, The Nice split up almost immediately after he founded Charisma. But Stratton-Smith persuaded the group to play a farewell tour, and they left two albums, Five Bridges and Elegy, to the label which provided a huge financial boost.

Charisma became an extension of Stratton-Smith – the acts were idiosyncratic to say the least. Stratton-Smith’s personal favourite, Van der Graaf Generator, were led by Peter Hammill. Stratton-Smith told Johnny Rogan in 1986, “Peter Hammill was the most talented lyric writer I ever, ever worked with. In those early days, I thought, ‘This is it!’ It’s a great loss to the collective taste that he didn’t make it internationally. He was an important and unique figure.”

He stood by Hammill for years. Hammill was later to say that Stratton-Smith was “an extraordinary man” and that Charisma was “vibrant, strange and unpredictable, as was Soho at the time. Very interesting times… It was still the Wild West End then.”

“Charisma was really a one-man show,” recalled ex-press officer Glen Colson. “Strat signed all the bands and we just ran around listening to him. He was a drinker. He was out every night until five in the morning, hanging out with MPs, he had racehorses…”

Part of the problem was that Strat wanted one of everything: a classical band, a jazz band, a rock band…. “Which used to confuse the shit out of everybody,” admitted Colson. “Because you’d come and he’d have signed something that you knew nothing about, like Monty Python or [Poet Laureate] John Betjeman.”

Folk rockers Lindisfarne, whom Stratton-Smith co-managed with Terry King, became the hit act he’d long craved. Fully in tune with their audience, for a while in 1971/’72, they extended a blanket of northern warmth across the whole of the UK. One of Strat’s greatest coups was bringing together Lindisfarne, VdGG and Genesis on the famous ‘six bob’ tours of 1971: taking his three acts around the country on the same bill. It was a bold, theatrical move.

Stratton-Smith would also send bands down to his home, Luxford House in Crowborough, Sussex (as pictured inside the gatefold sleeve of VdGG’s Pawn Hearts), to write and record, and would often work on faith alone. The success of bands like Lindisfarne helped support the less fortunate artists on the label. “He understood artist development and building an audience,” said Conroy. “His musical tastes were reflected in the label that he started, an eclectic mix ranging from Sir John Betjeman to [Chilean-Swedish folkies] Atacama.”

Just as Genesis were on the verge of some long overdue success, Stratton-Smith announced his retirement from artist management in 1973. He wanted to concentrate instead on running his label, diversifying into film, and, most importantly, looking after his beloved racehorses. He handed Genesis over to Tony Smith, who still looks after the group’s interests to this day.

“What they needed was the hard-nosed, super tour manager,” said Stratton-Smith. “Setting up these tours and logistics and sitting on the record company’s neck…. That’s a particularly time-consuming skill in itself and I really didn’t want to do it.”

In 1985, Tony Stratton-Smith sold Charisma to Richard Branson’s Virgin Records. He moved to the island of Las Palmas, Spain, and looked at various film projects. It wasn’t to be. Strat was taken ill during a visit to an old friend in Jersey. He was diagnosed with pancreatic cancer and died on March 19, 1987. He was just 53 years old.

Fellow Python Michael Palin wrote in his diary: “Wale talks from the enormously high pulpit about Strat’s fondness for public houses, though, of course, no one mentions that it was ‘the lotion’ that did him in.”

The after-party was held at the Marquee. The next day, his old compadre, Marquee manager Jack Barrie, scattered Strat’s ashes over the final fence at Newbury Racecourse. One of his horses, Sergeant Smoke, came in at 20⁄1. “I’ll best remember him as a generous romantic,” said Barrie. “A romantic, because he made dreams come true; generous because they were always other people’s.”

Peter Gabriel contributed to his obituary in The Daily Telegraph: “His favourite occupations he listed
as writing, talking and drinking, and in each, he could compete with the best. Strat earned himself a unique place in the worlds of entertainment and sport, a big man with a big heart. I will miss him.”

Tony Stratton-Smith was an old school beacon in the music industry. Although only a manager for seven years, he guided some of the most influential names in progressive rock.

As selected by Paul Conroy.

And Peter’s solo shows, too, in particular at The Commonwealth Institute, London, on September 19, 1973.