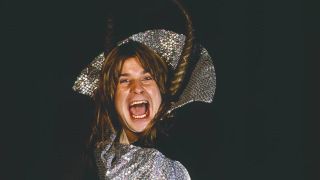 After a hard day at work, people like to let off steam in a variety of ways. Some grunt it out at the gym, some opt for a glass of wine in a hot bath. Some people, as you’re about to discover, take the whole ‘couple of pints after work’ mantra to piss-taking levels…

Essentially, for every minute Black Sabbath’s erstwhile frontman and premier rock loon was awake during the ‘80s, he was doing something that celebrated the inherent stupidity of rock ‘n’ roll.

As you might expect from someone who gave themselves their first tattoo aged 15 with a pencil lead and a sewing needle – a cryptic OZZY across the knuckles – Ozzy’s life has been more or less the benchmark of decadent behaviour. While in Black Sabbath, the band’s intake was the stuff of legend.

“You start with tobacco or alcohol and you just up the scale,” he told me once. “I remember when Leslie West gave me a line of cocaine for the first time and I was like, ‘Oh, I can’t go anywhere near coke. That’s serious shit. I don’t want any of that’. But he gave me a line and I went BING! And that was the end of me. I was banging it up my fucking nose every five minutes. It’s like wonderful powder. You think everything’s wonderful. And then you’re lying in your fucking bed at 7am with daylight coming in and your heart jumping out of your fucking chest. That ain’t so cool.”

Ozzy claims to have done acid with drummer Bill Ward every day for two years while Sabbath’s coke appetite was so voracious they were delivered the stuff in soap-boxes and nearly named Vol.4 after their cocaine-anthem Snowblind.

“We had piles of the fucking stuff!” he said of the making of that album. “I was used to buying a pint of beer at the local for two bob. And the next thing I had bowls full of fucking powder at $100-a-gram. How much must it all have been worth! I didn’t know whether to snort it or wear it as fucking jewellery. Every line was costing us a tenner! When I was working in factories I didn’t even used to earn a tenner.”

For three months after being fired from Sabbath, Ozzy locked himself in a hotel room and simply wrote ‘drugs’ on his To Do list. He then spent the next two years biting the heads of various winged creatures – a bat onstage, a dove during a record company meeting – before taking a pee on the Alamo while dressed in future wife Sharon’s clothes. He’d later attempt to strangle her in Moscow but not before trying to one-up Mötley Crüe’s Nikki Sixx, who had set fire to himself the night before, by snorting a line of ants while the two acts went on an ill-advised tour together.

Ozzy settled down in later years, only managing to half kill himself while quad-biking, having a naked tussle with a burglar, duetting with The Muppet’s Miss Piggy and struggling with a telly remote on The Osbournes. How he’s still alive is, frankly, a mystery – but it’s one that was once investigated by genome mapping company Knome who were so bewildered by the star’s apparent indestructibility, that they explored his genetic code to work out quite how he’d managed it. Top work.

This was a band who can count the fact that they’re all still alive as proof that, when you play the devil’s music, the man downstairs looks out for his own. During the 1980s, the Crüe’s motto seemed to be that if you couldn’t drink it, snort it, shoot it or shag it, they weren’t interested. That their managers once drew straws in an attempt to get out of having to spend time with them, before labelling them “savages with cash who care nothing about nobody”, speaks volumes.

One tour in Asia saw bassist Nikki Sixx hurl bottles of Jack Daniels at fans, order hookers from a Hong Kong strip club “like food dishes” and get so blitzed that he confused a riot squad for his fan club. On the same tour, singer Vince Neil complained to his hapless manager that the presence of his girlfriend was making it tricky to shag anyone else. The manager simply punched him in the face. And this was just one tour.

Awash with heroin, cocaine and alcohol, they’d shag groupies before, according to Neil, dipping their penises in burritos “to cover the smell of the girls we’d just fucked” before returning to their girlfriends. Meanwhile Sixx has been declared dead at least once but somehow survived (inspiring the song Kickstart My Heart) while, after an overdose in London, his dealer first tried to resuscitate him (with a baseball bat) and, on failing to, dumped him a bin. Yet still, like a cockroach after an apocalypse, he lives on. Others have not been so lucky: Hanoi Rocks drummer Nicholas ‘Razzle’ Dingley was killed in a car driven by a drunk Neil and two innocent bystanders suffered brain damage in the incident. A subsequent box-set entitled Music To Crash Your Car To was not in the best possible taste.

The line between debauched and professional is often thin one, and Slash has straddled it for years – almost always getting the show on the road no matter what state he has found himself in. In September 1992, a day after being declared dead after an overdose of heroin and crack in San Francisco, he still turned up on time to play a show. Something of which his bandmate Axl Rose might take notice.

Slash was once a drinker and drug-taker of the highest order. He once offered his decorator a couple of lines at 8am to help him get in the mood to convert his first house into a gypsy opium den. Once the decorating work had been completed, Slash would hole himself in that gypsy den and get so loaded that, after hallucinating demons, he’d patrol the place with a shotgun, a .38 special, a .44 Magnum and a couple of other handguns for good measure. On another evening, while supposedly detoxing at an exclusive Arizona hotel, he shot so many speedballs that he crashed through a glass wall then ran screaming, naked across a golf course under the impression he was being chased by goblins.

He has since cut back. Sort of. During a 2005 interview, he professed himself to be drug free while knocking back vast quantities of wine and espresso simultaneously. With a wink, he named the combination a “Poor man’s speedball”.

The rest of Guns N’ Roses were no angels either: drummer Steven Adler achieved the remarkable feat of being fired from one of the most notoriously drug-addled bands for being too strung out, Izzy Stradlin had his own heroin battle, and Duff McKagan booze-pickled his pancreas to the extent it exploded. In fact, only Axl never allowed himself to have a habit. Just big hats, by the looks of it.

The Chili Pepper frontman’s autobiography Scar Tissue contains a truly eye-popping amount of sex and drugs. A brief snapshot of the book runs thus: Kiedis loses his virginity to his father’s girlfriend aged 11, Kiedis starts taking heroin and coke aged 13, Kiedis shoots coke and heroin then shags a girlfriend for 12 hours straight, Kiedis befriends a total stranger on the stairs of a nightclub before shooting up vodka and LSD, Kiedis receives a blow job in the crowd while his band play on behind him, sessions for BloodSugarSexMagik involve a groupie arriving at the studio once a week to have sex with each of the band in turn… oh, and Kiedis humps Flea’s sister – much to the bassist’s eternal wrath. And all from a man named Anthony. Meanwhile former guitarist John Frusciante did so much heroin his teeth fell out, while he managed to set himself on fire freebasing coke. Not a band for children’s parties.

Any band in which the two leading components are dubbed The Toxic Twins, as Aerosmith’s Steven Tyler and Joe Perry were, suggests that large quantities of drugs, alcohol and groupies were being consumed – frequently at the same time. By the age of 28, at the band’s highpoint, Tyler was dropping $2,000 a week on heroin, cocaine and booze while his ‘stage act’ consisted chiefly of him passing out. Meanwhile the rest of the band would play on, often oblivious to their cocaine nose bleeds. Still, while it didn’t stop them chasing Playboy bunnies around hotel beds, it did eventually send their career into the buffers. Perry and Tyler fell out in 1979 and the guitar player struck out alone – often spending upwards of $6,000 on heroin to see him through a six month tour. But after a reformation prompted a mid-‘80s clean up, they got it back on track and recorded their seven-million selling album Pump a few years later. From megastars, to washed up, to megastars again in the course a decade: pure rock ‘n’ roll.