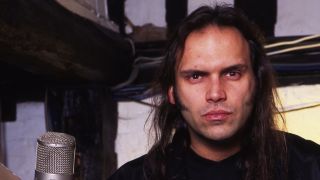 On October 2 1995, Iron Maiden released The X Factor, their first album with new singer Blaze Bayley. Malcolm Dome was there for the low-key launch.

We’d all become used to Iron Maiden album launches being a hail of torrential fanfares. Opulent parties where booze and canapés freely flowed – and the carnage came for free. There had been enough of these since the mid-80s. Waist lines and livers had been severely and regularly savaged in the cause of the latest Maiden releases. But this time, it was different. In more ways than one.

For a start, Bruce Dickinson had left. Now, it has to be said that a lot of people felt the band had become slightly tired and jaded with Bruce. The heroics of the 80s had given away to the slightly less vaunted 90s. Now, the band had Blaze Bayley upfront. Blaze Bayley! Blaze Chuffing Bayley! Yes, he had done a great job leading Wolfsbane. But they were a fun, bunch of clubland chumps. Very loveable, but come on… was he really the man to lead one of the world’s most prestigious metal bands?

It would have been like Black Sabbath replacing Ozzy with George Hatcher (look him up!) in 1980. Or AC/DC the same year choosing some bloke from Newcastle to take over from Bon Scott - oh they did, and he worked out well. But you get the point. Blaze in Maiden was daft.

Now, instead of a huge blow out for his first album with the band, something altogether low key was planned. So low key, it was almost inaudible.

An invitation had gone out to those who were at Kerrang!, asking if anyone would like to come along to the offices of Sanctuary, the band’s management company, to hear what would be The X Factor. Well, not everyone from the office was invited, but of the select few only three of us felt able to make it.

So, at the allotted time – I think it was about 4pm on a Wednesday (and it wasn’t raining!) - the intrepid trio made the short journey over to Bayswater in West London, where the band’s offices were then located.

We were ferried into the opulent board room, where a CD of the album had been set up, to blast through very high quality speakers.

Astonishingly, nobody frisked us for recording equipment, as in those far away days, you were trusted not to do anything so heinous as to surreptitiously tape an album. The internet was barely born, so the very concept of leaking something online didn’t exist. Yes, they were different days alright.

The vast table in the boardroom was laden with the occasional chocolate biscuit and a freely flowing jug of water…actually, that’s being very unfair. Sanctuary were never anything less than very hospitable, and there were cans of beer, plus cups of tea and coffee on offer as well. However, it wasn’t at all comparable to the joyous spreads of yore.

With the ‘play’ button whirling into action, we were left to enjoy the album. Just three of us in this vacuous room. Our collective hearts sank as a monks style chant kicked everything off. “This is bloody rubbish,” chortled someone, getting ambient nods of agreement. And the song in question, Sign Of The Cross, hardly improved once it kicked into gear.

Things barely improved as we sat through the rest of the album. You can always tell when an album isn’t getting a good reaction. People are fidgety, start looking longingly at the time…in the current era, phones would be out with everyone messing around, just to be distracted. But in 1995, you just hoped the next track up would somehow improve everything. It didn’t.

When the last notes on the record died away, the three of us sat in brief, stunned silence.

“Well, it might have been better with a decent singer,” sighed someone. Again, nods of agreement. We waited for what seemed like an age for anyone to come and usher us out of the room. But nobody appeared. And then one of us had a cunning plan.

“I’ve got this,” he said, pulling a copy of the Killers album by Maiden out his bag. “Let’s put this one, before someone has the bright idea of making us listen to the new album again!”

So, on went Killers, and we were reminded of one of Maiden’s finest records. It sounded like a different band – but, then, for the most part, it was. What happened next is hugely amusing, but is best left off the record.

And then we were politely shown the door, left stunned at how a band with Iron Maiden’s pedigree and history could have sunk so low.