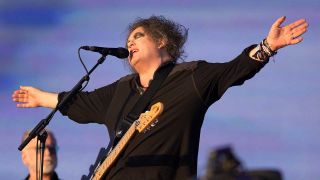 On Saturday, as the rest of the nation were distracted by the little matter of a certain world cup quarter final, 65,000 music fans piled into London's Hyde Park to celebrate 40 years – to the exact weekend – of The Cure. As part of the British Summer Time festival, the day's programming was a vibrant celebration not just of the band's career, but also their enduring legacy. The band were joined on the bill by both longtime friends and a selection of Smith's protogees, including British shoegaze stalwarts Slowdive, who shimmered dreamily in the sun, while experimental Swedes pg.lost and Icelandic synth-punks Kaelan Mikla showcased the profound effect The Cure's music continues to have over alternative music.

Having developed something of a reputation for unpredictable and obscure setlists – just ask anyone who attended their first Hyde Park gig back in 2002 – speculation about the potential setlist had been rife. With the band having performed a diverse and varied set just three weeks earlier at the Robert Smith-curated Meltdown Festival, we ourselves predicted a playlist of relatively little-known deep cuts.

Well, we were wrong.

Instead, The Cure pulled off what must, surely, count as being about as close to the perfect The Cure playlist as is possible. There was the crowd-pleasing, banging 80s pop, there was the considered introspection of their quieter moments, there were enough deep cuts to keep hardcore fans happy, and enough hits to please, well, everyone. The lion's share came from career highlight Disintegration, with Plainsong, Pictures Of You and Lovesong all lulling the crowd into dreamy appreciation. Elsewhere Boys Don't Cry, Friday I'm In Love and A Forest caused the crowd to explode into a raucous, synchronised singalong. The setlist also included a few surprises, with both Jumping Someone Else's Train and Grinding Halt getting live outings for the first time since 2011.

If we were to pick holes, there was nothing to represent Faith or Pornography, plus the glaring omission of The Love Cats (though a glance at previous setlists will show you that's rarely, if ever, played). But no setlist can ever include everything, nor can they please all the people all of the time.

Most importantly, the performance celebrated four decades of music that is genuinely important, influential and actually means something to people. “Forty years ago this weekend was the first time we played as The Cure,” Smith told the crowd. “It was in The Rocket in Crawley. If you asked me what I’d be doing in 40 years’ time, I’d be wrong.”

Check out the full setlist below, plus a playlist at the bottom of the page.