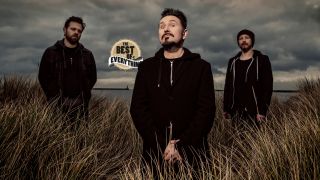 During their 26-year career, Therapy? have released 14 albums, four compilations and one live album. Here, frontman Andy Cairns wades through their considerable back catalogue and picks out 12 gems just for you…

BEEFHEART/ALBINI (30 Seconds Of Silence, 1989)
This is from our first ever demo tape and is also on our recent Gemil box set. It’s the perfect example of how we took whatever we were listening to at the time and appropriated it into our sound. Steve Albini-related projects were a huge part of early Therapy?, be it the jackhammer drums of Big Black, the ambient drum sound of Rapeman or the metallic and rhythmic single string riffs. A lot of our early attitude was formed by Atomizer and Two Nuns and A Pack Mule. I absolutely loved Beefheart and on this track Fyfe completely nails the tumbling cacophony of classic era Magic Band. It’s jagged and cubist and lots of fun.

LOSER COP (Babyteeth, 1991)
After a party myself, Fyfe [Ewing, original drummer] and some mutual friends were attending in Portrush was raided by cops a bunch of us were dragged of to the station and questioned. A very small amount of hash was found but the cops acted as if they’d just nailed Pablo Escobar and spent the entire time remarking on our long hair and ripped clothes. Someone had drawn a pentagram on the bathroom mirror in shaving creme which wound them up no end. I think the music captures the brio and verve we had in those early days. The jazzy swing feel to the tune was influenced by John Zorn and Dead Kennedys. The arrangement tells the story of the evening unfolding, from the creepy, ominous riff at the start to the noisey whine of the cop car undulating into the bust ‘theme’ and into the techno triumph of self righteousness before ending in a hectic squall of frustration and fury. The sax solo was played by Keith from Caroline Music record store in Belfast. He’d drank most of a bottle of tequila by the time it was his turn to record.

MEAT ABSTRACT (Babyteeth, 1991)
The title is from a series of works by artist Helen Chadwick that we were all fascinated by. We liked the idea of our very being mutating either into something vital or rotten. Musically, we’d started listening to Belgian New Beat and the main guitar riff came from attempting to replicate squelchy synth lines we’d heard on records by Lords of Acid and Erotic Dissidents. Lyrically, we were improvising on a newspaper article in which a very young boy had murdered some people with a shotgun. When the police showed up, the killer was reportedly wearing a t-shirt emblazoned with ‘No one knows the trouble I’ve seen’, which became the opening lyric.

POTATO JUNKIE (Pleasure Death, 1992)
One of our best known songs was nearly binned as the riff was thought ‘too grunge’ and ‘too rawk’ at rehearsals. The lyrics came about from the constant Leprechaunia we were witnessing first hand in Ireland. The tourist industry was getting bigger and the land of the bog fairies and intense, playful literature was nowhere to be seen in our own lives. The ‘James Joyce is fucking my sister’ refrain became very popular very quickly and we kept it in the set and put it on the Pleasure Death album.

FANTASY BAG (Pleasure Death, 1992)
I’d been listening to tons of Loop, Spacemen 3, Hawkwind and Helios Creed and had written a riff which I thought would be an uptempo, space rock stomper. Fyfe had other ideas, brought the tempo down and it worked brilliantly turning the tune from a Stooges groove into a hypnotic mantra about serial killing. Listening to it now, the groove is nearly proto dubstep. When playing tracks like this and Meat Abstract in the early days, I’d often get so in to playing the repetitive, trance riffs that I’d forget where I was. It’s an amazing feeling.

NOWHERE (Troublegum, 1994)
With our poppier, early ‘90s singles I think I was completely in awe of my Ulster punk teenage years and wanted desperately to replicate it. The Good Vibrations label put out amazing singles by Rudi, Undertones and Outcasts and they all seemed to have hooky guitars and catchy choruses all over under three minutes. I think Screamager and Nowhere is the closest we’ve come to wearing that influence on our sleeves. Nowhere nudges it for me as its got everything I looked for in a punk record when I was 14: identifiable intro, sing-a-long chorus, wonky guitar solo and existential lyrics by someone who didn’t yet know existential meant.

EPILEPSY (Infernal Love, 1995)
I’ll always associate this track with being in Sydney, Australia and listening to it with Fyfe on repeat for a very long time. We’d just recorded the album and flown to Australia for a tour. We had a copy with us and we knew it wouldnt be released for a while. The recording sessions had been horrible and stressful and myself and Fyfe weren’t talking. We ended up chatting on a night off and playing this song which, briefly, broke down any barriers. Both of us loved the track, the twisted riff, manic, bop drumming, and guttural bass work. The ‘free jazz’ freak out section was inspired by Ornette Coleman.

RUST (High Anxiety, 2003)
What a drum track by Neil Cooper. I think I could listen to the drums alone, never mind the rest of the track. A beast and a very grumpy beast at that. Like Potato Junkie, this one went down incredibly well from day one. A bit of Sabbath, a bit of Queens of the Stone Age.

UNCONSOLED (One Cure Fits All, 2006)
From an album that sits awkwardly in our, ahem, ‘canon’. I love this track. Michael [McKeegan, bass] sent me the mournful bass line over a drum machine and I wrote the lyrics pretty soon afterwards. Unfortunately no one ‘got’ the track and it’s languished unloved ever since. I find it comforting.

CROOKED TIMBER (Crooked Timber, 2010)
We’d all started listening to bands like Can and Neu and were jamming around with that motorik beat. There’s a plangent mood that I got from long dark nights commuting to the East Midlands to write and rehearse. Spending hours in the car on dark A roads. When we got to the studio with the song, it was a very straight ahead drone rock track with a good melody – but no dynamics. With the help of producer Andy Gill, we made the arrangement more adventurous and added space and echo. We’d also been listening to a lot of Burial, so we tried some manipulation on the vocals too.

BEFORE YOU WITH YOU AFTER YOU (A Brief Crack Of Light, 2012)
Trying to sound like Geordie from Killing Joke is a fool’s errand but like many a fool, I return again and again to a never ending source of wonder and inspiration. Like the guitar sound on Never Mind the Bollocks, the sound of Killing Joke is unable to be mimicked, no matter how many times you try. There’s alchemy at work that only reaches out to the select few and I’m not one of them. I can, however, give it a go and what you get here is a spindly approximation of one of my favourite guitarists of all time (in the intro part at least). There’s vocoder on the vocals during the chorus as I’d just seen Chris Petit’s movie, Radio On and was obsessed with early Kraftwerk records. Thankfully, the band and engineer pulled me back from the abyss of going ‘full Hawking’. The lyrics were inspired by the novella How It Is by Samuel Beckett.

DEATHSTIMATE (Disquiet, 2015)
I stumbled across this riff when I was trying to write a riff as good as the one on Fugazi’s Latest Disgrace. In the studio we told producer, Tom Dalgety we wanted the track to sound like Portishead covering Black Sabbath. We do play the riff a lot in this song but, hey, if you’ve got it….

Therapy? kick off their European tour on November 12. For full dates, see their official website.