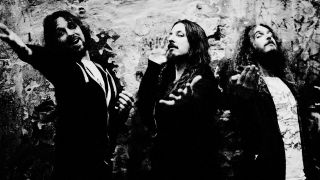 “The Kentucky Meat Shower is a historical incident, something that happened in 1876 in a small town in Kentucky. It essentially rained meat and no one was quite sure why.”

“Modern science had a rational explanation which involves a flock of buzzards feasting on a horse, which I guess must have been past its expiry date. So they munch away on the dead horse for a while and then take to the air and realise that what they’ve eaten is not good food and spontaneously they all disgorge it over this unsuspecting town. It’s an eerily accurate title and all-encompassing. I just felt it deserved to be a song.”

Instrumental music is a funny old business. For every sublime flight of voiceless fancy, there are a thousand appalling squalls of virtuoso posturing and tuneless showmanship. Until now, however, there has never been a band inclined to pen instrumental tunes about 19th-century fleshy downpours. Neither has there ever been a band – particularly one featuring noted masters of their chosen instruments – that have been anywhere near as unashamedly joyous and exhilarating as The Aristocrats.

Named after a legendarily foul and wicked joke told by comedians to other comedians (and if you haven’t watched the docu-movie of the same name, we urge you to do so immediately), the band is a collaboration between guitarist Guthrie Govan (to whom the above explanation of new Aristocrats tune The Kentucky Meat Shower should be attributed), bassist Bryan Beller and drummer Marco Minnemann. And on paper, at least, it appears to be another one of those interminable three-way muso-fests beloved of gifted sidemen in the prog world.

“It’s funny you should bring that up because we were dead set on not being one of those bands,” Beller tells Prog. “We didn’t want to call ourselves Govan Beller Minnemann and have song structures that were basically just vehicles for everyone to solo endlessly. We all felt like we should make a real band and write songs that stood on their own merits, and to try to create a sound that was identifiable as The Aristocrats, as opposed to, like you said, some hotshot collaboration record. Some of those things are good, for sure, but we just didn’t want to be that thing.”

In stark contrast to pretty much all equivalent projects, The Aristocrats are very much a real band, and one focused wholeheartedly on the art of penning actual songs. Their new album, Tres Caballeros, hammers that fact home with a big, shit-eating grin plastered across its face. These nimble-limbed craftsmen audibly revel in shared chemistry and each other’s brilliance across 10 tunes that veer from swivel-eyed bluegrass metal through to squawking, off-kilter jazz fusion, often within the same song and rarely with a pause for breath.

The third album the trio have made since first playing together for fun at a NAMM conference in Los Angeles in January 2011, the record is undeniably progressive but so far away from ponderous demonstrations of individual dexterity that it seems almost punk. The result is that while their associations with the likes of Steven Wilson and Mike Keneally will certainly endear The Aristocrats to the prog faithful, the sheer exuberance and scattershot focus of their wild compositions may yet have appeal way beyond this realm. It certainly helps that the band’s shows have swiftly become notorious for being raucous, celebratory affairs.

“We’re very friendly with the audience and it all happens on the spot,” notes Minnemann. “The chemistry we have personally in the band, where we end up telling jokes on stage or make fun of our own songtitles, it’s just about being entertaining. It doesn’t really happen on purpose. We just feel comfortable with each other and we don’t take ourselves too seriously. We want that communication factor and that energy exchange.”

“We seem to get a healthy cross section of people at the shows,” adds Govan. “You obviously get a few people that focus exclusively on one particular instrument and bring their notepads and binoculars and scrutinise everything, but a lot of people come because they find the fun aspect appealing, like, ‘Hey, these guys seem to really enjoy playing together – let’s go and soak up some of that infectious naughtiness!’ I don’t know if we can categorise what we do. It’s not prog because it’s silly, it’s not jazz because it’s too loud and it’s not rock because it’s too weird. It is what it is.”

It is, of course, impossible to not notice how insanely proficient each member of The Aristocrats is on his respective instrument, but even Tres Caballeros’ most complex and bewildering moments are tempered by an overarching sense of fun. Even more so than on either 2011’s eponymous debut or its 2013 follow-up Culture Clash, the band’s combined effervescence makes for a gloriously uplifting and musically rich experience, albeit one peppered with bursts of jarring mischief and, most amusingly, a first flurry of vocals on an Aristocrats record, on the Sergio Leone sprawl of Smuggler’s Corridor.

“It’s one of those things where I wrote the song in a very specific genre, the whole Spaghetti Western thing, and I heard that melody when I woke up one day,” explains Beller, the song’s composer. “I heard the groove, I heard the whole thing and I knew how it was going to sound. As I started demoing the album, we had the solo section with the guitar solo, the bass solo and the drum breaks. I knew there was gonna be a breakdown and I knew that there would be people humming the melody. I didn’t know what Guthrie and Marco were gonna think about it. As it turns out, Guthrie strongly disapproved [Laughs]! Marco thought it was funny. It ended up on the record, but because of scheduling more than anything, I brought in Brendon Small, the leader of the fake metal band Dethklok, and Ben Thomas, the lead singer of Zappa Plays Zappa, and they both came in to hum that melody. It’s just silly. As you would say in England, I think we were taking the piss!”

“This ended up being a very overdub-heavy record, which we wouldn’t have predicted before we made it,” Govan continues. “It’s also strangely American. The whole thing seems to be infused with various flavours of cowboy, which wasn’t a deliberate thing. That’s just what we discovered when we pooled all the demos together – this Americana thing seemed to have come to the forefront, much to everyone’s surprise and, dare I say, delight. I guess as we’ve played together for a few years now, we’ve figured that we can do silly things and take risks without compromising the overall sound of the band and that’s heartening. We’re having a lot of fun doing these silly things!”

What started as a one-off jam has plainly mutated and evolved into something that all three musicians are now enjoying to such a colossal extent that The Aristocrats have long since stopped being a side project and they’re now beginning to feel the wind in their sails and the momentum that follows.

As modest and self-effacing as each band member assuredly is, there’s an unmistakable sense that they’re genuinely surprised and thrilled to discover that the chemistry between them has continued to spark and fizz. Tres Caballeros has plenty of substance to back up the silliness and showboating, and showcases a meeting of musical minds that’s gently nudging the progressive rock rulebook towards the furnace.

“The helpful thing is that we’ve done a lot of gigs, and every time you gig it cements that chemistry a little more and enables you to feel freer in what you do,” Govan states. “We’re not trying to force anything but there’s logic behind playing more and more and hoping that you become a more cohesive unit. We’ve always focused on the compositional aspect so there’s always something there that’s recognisable as a tune, and the notes are played in that order deliberately! There’s balance between composition and letting off steam, and I guess whatever you hear on the albums is a group consensus of where that balance should be, between those two extremes.”

Clearly the most fun that three grown men can have together with their clothes on, The Aristocrats may take their name from the foulest of dressing-room banter, but their motives are endearingly pure: this is all about music, friends and having as much fun as possible. It’s prog, it’s fusion, it’s rock’n’roll. And that, ladies and gentlemen, is entertainment.

“Yeah, we’re playing music but the music business is part of what is generally known as the entertainment business,” Beller concludes. “If we’re not entertaining people then what are we really doing? In order to have something that we think is fun and the audience reacts to it and everybody has a good time, there have to be some kind of entertaining parts in there. Fortunately it’s just built into this formula somehow… and it’s occurring naturally.”

Tres Caballeros is out now on Boing!. For more information, see http://www.the-aristocrats-band.com.