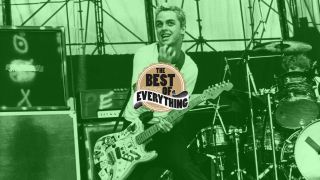 One year and two days ago, we featured UK pop-punk flag-bearers ROAM in our weekly new band column, New Blood. Almost one year later, the Eastbourne quintet are gearing up to release their full-length debut album, Backbone, on January 22.

It seemed as good a time as any, then, to task their frontman Alex Costello with picking 11 essential pop punk anthems that shaped the current scene…

SUM 41 – Makes No Difference (All Killer, No Filler 2001)
“Here’s a song that we play in the van all the time. It’s such a nostalgic song for us but in a very happy way. We’re all massive Sum 41 fans and can’t wait to support them next month. That will be surreal.”

**BLINK-182 – Online Songs (Take Off Your Pants and Jacket, 2001)
** “I chose Online Songs because it basically has everything you could ever want from a Blink song. It’s very light-hearted and fast-paced. It’s just such a shining example of what a pop punk song should be. And a list of pop punk songs would not be complete without a mention of Blink-182.”

GREEN DAY – She (Dookie, 1994)
“It was massively difficult to pick a favourite song by Green Day. I mean, where do you start? She, taken from Dookie, is definitely up there for us because it has one of best choruses ever. It was also one of the first songs Matt [Roskilly] learned to play on bass as well as Longview! This song is part of our history, in a sense.”

SIMPLE PLAN – I’d Do Anything (No Pads, No Helmets…Just Balls, 2002)
“I’d Do Anything is a classic song from one of the biggest in the game. I love the way the guitar riffs in the verses stand out so much against the vocals. This song provides the perfect singalong, for sure.”

PARAMORE – Misery Business (Riot!, 2007)
“Here’s another singalong fave. This song is one that we, especially Sam, end up screaming at the top of lungs as we’re travelling around in the van on tour. Or just in the car at home. Or anywhere really. I’m sure most people would do exactly the same thing. You just can’t help it. We’re all big fans of these guys and this song is one of their best.”

SUCH GOLD – Cut Rides (Pedestals, 2010)
“This was big song for us when we started out as ROAM. This is one that shows more of an aggressive side to pop punk, which we certainly like every now and again. Variety is the spice of life after all! Ben’s [Kotin] voice is flawless live. “

ALL TIME LOW – Damned If I Do Ya (Damned If I Don’t) (Nothing Personal, 2009)
“This is one of the first songs we covered. There’s a moment in the song where most of the instruments drop out and Alex Gaskarth’s voice cuts through with the title… it really hooks you in. It was so much fun supporting All Time Low in Spain last year. Their fans are the best.”

GOOD CHARLOTTE – Lifestyles of The Rich and The Famous (The Young and the Hopeless, 2002)
“This is such a classic song and the video is badass, too. It’s crazy to see how different the band look then compared to now. Good Charlotte certainly have a knack for writing the catchiest of choruses. Even the drums are brilliant and help establish those high energy levels nice and early in the track.”

SET YOUR GOALS – Summer Jam (This Will Be the Death of Us, 2009)
“We had to choose another Set Your Goals track! They’re one of our all-time faves. Matt [Wilson] did guest vocals on our record, too. It’s got such a positive summer-based vibe with gang vocals and a super-catchy bounce along chorus.”

FOUR YEAR STRONG – It Must Really Suck To Be Four Year Strong Right Now (Enemy Of The World, 2010)
“This song features one of the best riffs in pop punk to this day, hands down. It’s also a little on the heavier side, too. Simply put, this song is incredible. It’s definitely got a nostalgic element for ROAM too. It takes us all right back to the time when it was released five or so years ago. ROAM didn’t even exist then, in fact!“

Listen to the songs on our Spotify playlist: The 10 best pop punk anthems, by ROAM. For Such Gold’s Cut Rides, click here.

For more information on ROAM, visit their official Facebook page.