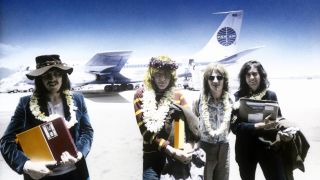 I come not to bury Led Zeppelin in this dissection of their 10 worst sonic moments. Why on earth would I? It’s not for nothing that the four-piece have been universally acknowledged as the greatest rock band the world has ever seen. But in amongst the frankly ridiculous amounts of wheat – and if you listen very hard – there still lies the odd bit of chaff. Here they are, sifted with due care and diligence just for you…

The second track from Presence starts off with a promising riff, a nice and spacey affair with considerable groove. But the tune never catches up with the riff and ambles along looking for a hook. Robert Plant’s lyric appears to be a finger-wagging exercise directed at a female whose cocaine habit is spiraling out of control, and is an interesting enough tale. But it isn’t enough to rescue the song from mediocrity.

A song that was recorded during the sessions for In Through The Out Door in 1978, but never made the cut. It finally saw the light of day on Coda. That’s not surprising, given that it’s a speedy but ultimately guileless affair. It’s not that the song is outright bad. But Zeppelin was never supposed to be about the average. Rumour has it that the band were trying to show that they had as much musical energy as the emerging punk outfits of the time. Of course they should never have stooped so low.

A song from Houses Of The Holy that came together as a jam and was inspired by the loose-limbed funky grooves that James Brown was able to produce so effortlessly. A nice idea, but an ill-advised tune that has none of the charm that Brown could summon at will. The groove isn’t all that strong and Plant has trouble latching onto anything that could be considered memorable. It’s mildly humorous – “has anybody seen the bridge?” – but that’s all it has to recommend it.

Apparently something of a lyrical bitching session from Plant about both guitarist Jimmy Page and Zep manager Peter Grant’s way of treating him. “I’ve got friends who will give me fuck all,” he whines. But any sense of vitriol is lost as the song goes up its own arse in a revolving door of ho-hum riffs and ill-advised funk grooves. Hots On For Nowhere features on Presence and runs to four minutes and 44 seconds – but it feels an awful lot longer. Not a good sign.

This track from Coda is marginally more interesting than Moby Dick because of the electronic effects on the drums. But all the same, there’s no getting away from the fact that this is a drum solo. And drum solos are a waste of aural space. Page added the effects weirdness to the track for the posthumous album release following drummer John Bonham’s untimely death. But in all honesty he should have left well alone.

Was there ever really a time when fans were gagging for drum solos? It feels like such an antiquated art form. And if John Bonham, the best rock drummer there ever was can’t make one interesting to listen to, then surely that’s all the proof you need that drum solos are surplus to requirements. The riff that leads into all the tub-thumping here is a fine enough thing. But this song from Led Zeppelin II is a track out of time.

A weak number from Zep’s weakest album, Presence. Plant may rate it as one of his favourites off the record. But his attempt to add some rockabilly flavoured-vocals to an aimless riff doesn’t lift the track out of the ordinary. Plant’s endless ‘oh baby babys’ wear on the ears pretty quickly and the scat outro sounds like a man looking for a way out of a vocal cul-de-sac. This doesn’t feel like a song. It feels like a jam. And a poor one at that.

At least the lyrical content of this track from Presence is funny. The song is allegedly about bassist John Paul Jones setting fire to the Royal Orleans hotel in New Orleans after having rolled a joint in his hotel room with a transvestite friend called Stephanie and fallen asleep. But the band’s attempt to funk things up around a couple of averagely decent Jimmy Page riffs doesn’t quite pass muster. Not awful, but somewhat forgettable all the same.

The sound of a band amusing themselves rather than their audience. Page plays a combination of standard acoustic blues songs on bottleneck guitar on this track from Led Zeppelin III and the whole affair is spiced up with some reasonably interesting studio effects. Plant’s vocal is deliberately manipulated to sound like an ancient recording. But none of this can disguise the fact that it’s a thin piece of content that should have ended up on the cutting room floor.

There’s some debate as to whether the vocals to this song from Coda were recorded at the same time as the music. Which perhaps explains why the tune lacks any cohesion. It meanders along without purpose, the various component parts failing to gel with any conviction. There’s often a reason why tracks fail to make it onto a band’s regular albums. This number is all you need to understand what that reason is.