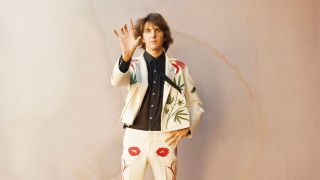 It would be too easy and rather lazy to describe country rock as merely rock bands playing country music – as the internet’s All Music Guide does. Anyone who has been seduced by the high-plains feel of the often wonderfully intricate sound, or the rebellious nature of the outlaw image that so often rides hand-in-hand with country rock will tell you that it’s the beginning of a life-long love affair with the music.

Although country rock in the 70s is festooned with some of the biggest names of the genre, its roots can be traced back to the beginnings of country. Country music, or bluegrass in its purest form, is essentially white America’s traditional folk music. The Carter Family’s early explorations of bluegrass in the 40s and 50s are as good a place to start as any, but it was to country’s very own hillbilly Shakespeare, Hank Williams, and Bakersfield Boogie Boys Merle Haggard and Buck Owens in the 50s and 60s that we must turn to see the inspiration behind the men who first melded country music’s unique blend of melancholy and good time muse.

Gram Parsons is widely regarded as the man who instigated the move between the two seemingly disparate genres, first with the International Submarine Band, and later with The Byrds, notably on 1968’s excellent Sweetheart Of The Rodeo, before blowing the genre wide apart with the first country rock supergroup, The Flying Burrito Brothers.

Others followed; Neil Young and Steven Stills from Buffalo Springfield both made major splashes in the water throughout the 70s, while a host of more polished acts and beautifully crafted songwriters like The Eagles, Poco and Jackson Browne came to the fore, with some gaining immense success.

Elder statesmen of the genre such as Johnny Cash, Willie Nelson and Waylon Jennings shunned the Nashville schmaltz that has so often put off people in the UK (not least hard rock fans who still seem split on the whole country rock issue), and established the Outlaw sub-genre, which in turn allowed the excellent songwriting of Kris Kristofferson to shine through. Elsewhere, the likes of Little Feat dragged country rock back to the rock fold, while new young pups like Joe Ely would help develop a harsher direction from which, eventually, would develop the alternative country movement of the 90s.

Like many before and after, Parsons’ fondness for the rock’n’roll high life meant he would not live to see the release of his second album. However, in a short recording legacy (two solo albums, one Byrds album and two Flying Burrito Bros affairs), Parsons nailed his colours to the mast as the doyen of country rock. Grievous Angel just shades GP, his debut, with its close-knit vocal harmonies between Parsons and Emmylou Harris, and quality songs such as Return Of The Grievous Angel, $1000 Wedding, Hickory Wind and Love Hurts. And it’s the best representation of Parsons’visionary intellect you’ll find.

Widely and quite rightly regarded as one of rock’s finest albums, 1976’s Hotel California was the album that broke The Eagles as the biggest West Coast rock phenomenon there’s ever been. Starting life as Linda Ronstadt’s backing band and interwoven in the country rock songwriting fabric alongside the likes of JD Souther and Jackson Browne, the arrival of James Gang guitarist Joe Walsh in place of Bernie Leadon lent the band a harsher edge. This resulted in Hotel California bridging the gap between AOR and country music. There’s not a bad song on offer, which is why it also gave the band three US No.1 singles.

A Rhodes scholar, soldier and English teacher, Kristofferson started his musical journey in 1965 after Johnny Cash encouraged him to chance his hand as a songwriter in Nashville. Although best known as a writer of songs for others at the time, Kristofferson made his own debut in 1971 with this excellent selection of self-penned songs, including such well-known tunes as Help Me Make It Through The Night and the brilliant Sunday Morning Coming Down. There’s a rock’n’roll spirit running through every song and by the time of his next release, he was a star.

Although Little Feat’s music often veered into funk and blues, the band were equally adept at country rock. In fact, they’re one of the finest 70s rock bands to incorporate country music into their repertoire. The band were led by inventive visionary Lowell George, a songwriter of sublime talent, as evinced by a reworking of the band’s signature tune Willin’ (it had originally appeared on their debut, which had sold poorly, prompting a stylistic rethink from the band). Elsewhere, George’s talent was to the fore on the sweet ballad Trouble, the folkish title track and the good-time country rocker Teenage Nervous Breakdown.

Not one to trouble the upper echelons of the UK charts too much throughout his amazing career, Harvest gave Young his only No.1 album, and the resultant Heart Of Gold single also found itself nestling at No.10 in the singles charts. In hindsight this is no surprise as Harvest is one of the brightest gems in rock’s crown. It is also one of Young’s finest excursions into country territory (to which he would return on 1985’s Old Ways), exemplified by the gently carousing Are You Ready For The Country?. Equally, the title track, Heart Of Gold, Old Man and Needle And The Damage Done, are some of Young’s best ever tunes.

The same year his ex-Buffalo Springfield/CSNY colleague Neil Young was scaling commercial heights with Harvest, guitarist Stephen Stills offered up his own country rock band, Manassas. They may not have set the charts alight, but the debut remains a gem nonetheless. Amassing a talented group of musicians around him, including ex-Byrd Chris Hillman, Stills explored four musical avenues on four sides of vinyl. The Wilderness section is primarily country and bluegrass, although the folk vibe of Consider and the closing Rock & Roll Is Here To Stay stray into country rock. Perhaps too expansive for its own good, time has served this well.

Poco are best known these days for being the band that featured Timothy B Schmidt, who took over from Randy Meisner in The Eagles (and indeed remains with them to this day). In fact, to some extent, The Eagles have long overshadowed Poco. Although later in the 70s both bands plied a trade in softer, less countrified rock, early on, both could hold their own as cowboy-booted rockers. Crazy Eyes is a perfect example of Poco’s rockier work; it was one of their biggest selling albums; and is also one of their best. The Byrds’ Chris Hillman crops up on mandolin, and the band are very much at the top of their game.

Having come to prominence as the shimmering-voiced vocal partner of country rock pioneer Gram Parsons, Harris took over a year to re-launch her solo career following Parson’s death in 1973. With Pieces Of The Sky, she did so with aplomb. The same year she also released Elite Hotel, a better collection including covers of Buck Owen’s Together Again and Hank Williams’ Jambalaya. Better still were her versions of Parsons’ Ooh Las Vegas and the Burrito Brothers’ Sin City, which swiftly established her as the queen of country rock. She dipped into pure country in the 80s but has since reclaimed her crown.

A writer of introverted yet splendidly observed songs, the youthful Browne had played with the Nitty Gritty Dirt Band before establishing himself as a songwriter for the likes of Bonnie Raitt and Linda Ronstadt. Running On Empty is a conceptual album based on life on the road, and recorded on the road. However, it’s not a live album per se, and was recorded in hotel rooms and tour buses. It is also his creative high: Browne’s incisive wit comes to the fore on The Load Out, Stay and even Cocaine, but perhaps most on Rosie, which is possibly the only ode to auto-eroticism in the country rock canon.

The most common complaint from rock fans of the country rock genre is that it doesn’t rock hard enough, with many calling a halt after delving as far as The Eagles. Joe Ely is the man from the 70s who proves otherwise. Once a member of the excellent Flatlanders alongside Jimmie Dale Gilmore, Ely’s solo debut finds him mixing Tex-Mex, rockabilly and outlaw country in a manner that proved hard enough for him to tour with The Clash in the 80s, yet country enough to do the same with Merle Haggard. Of anyone listed here, Ely proves the strongest link with the resurgent alt.country movement of the 90s

The 25 best country rock songs of all time