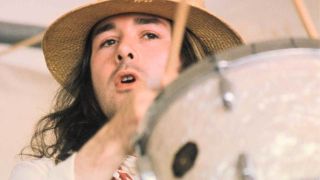 “The whole idea is to celebrate Phil Lynott’s songs,” says Brian Downey. “They’re fantastic to play, and they’ve really stood the test of time. They’re as good as anything anyone’s ever written.”

2018 sees the anniversary of one of the greatest live albums of all time, Thin Lizzy’s Live And Dangerous. Recorded in front of rabid audiences in London, Philadelphia and Toronto - then tweaked in the studio to a greater or lesser degree, depending on who you believe - it’s one of the great live albums.

40 years after those original recordings were made, Brian Downey, the man who deliverd that eviscerating drum solo on the live version of Sha La La, is bringing the show back to London. Brian Downey’s Alive And Dangerous - where the drummer is joined by guitarist Brian Grace, bassist and vocalist Matt Wilson, and guitarist Phil Edgar - play at Nell’s Jazz & Blues on November 24 and 25. Tickets are on sale now.

It’s from the Nightlife album, the first one with Brian Robertson and Scott Gorham, and I love the groove on it. It was a spontaneous thing that came up in rehearsal: Phil came up with the tempo, and it’s one of those tunes that’s just great to play. I still love listening to it.

Again, a great groove. Kind of a shuffle. It’s a song that was thrown back and forward a few times in rehearsal, and was originally quite different. Someone suggested we try it with a shuffle beat, and it worked perfectly. It’s become a real favourite.

This was an idea that Phil had knocking around just before we recorded it, and there’s a bit of a Hendrix influence in there, which I like. We were all pretty influenced by Hendrix back in the day. At the time the track was recorded I wasn’t exactly sure what the idea was, but it came out pretty well. It might not be said in the song, but it’s definitely dedicated to Hendrix.

A kind of a funky groove on this one. Phil had come into rehearsal with the idea a few times already, so I kinda knew the song, but it was never really developed until we got into a recording studio in London. We decided to have another go at it, and it came together pretty quickly in the end. It’s a great song to listen to, with a great groove.

6. Look What The Wind Blew In

From the original Thin Lizzy album, recorded at Decca Studios in West Hampstead. It was a song we really struggled with when we were first rehearsing the album in Dublin, then we went to London to record, by which time we had the song’s outline well worked out, from start to finish, and it came together pretty quickly.

From our second album on Decca Records, Shades Of A Blue Orphanage. Another great groove that Phil had. A very simple, heart baseline that the drums compliment. And Phil’s lyrics just sound fantastic on that song. There’s also a great guitar solo with lots of feedback.

From the Jailbreak album. Kind of an Irish-influenced groove on this one. Lots of Irish-influenced guitar, too, with a jiggy kind of vibe. Phil’s vocals are splendid on this. The lyrics are really good. “Down from the glen came the marching men” is the kind of standard opening line you’d get with those traditional tunes - I’d heard that sort of refrain before - but Phil put his stamp on it.

Gary Moore came into the band a couple of times to help us out when guitar players left, or disappeared, or didn’t turn up. And on Black Rose he played brilliantly. He came up with the idea for the riff, and we all waded in with our own ideas. That’s what makes Black Rose really special for me: everybody contributed something to the song, and it came out brilliantly.

This song came about before we went to Canada (we had to get out of England at the time because of our tax situation, so Tony Visconti came up with the idea of going to Canada to record). It came together pretty quickly: lots of nice strumming in there. Phil left it nice and open, didn’t really arrange it too much, leaving lots of room for the drums, and it sounds pretty good to me.

From the Vagabands Of The Western World album, the third album we did for Decca. We went into the studio in London and left everything open for spontaneous jamming. And that shows on the record, but it sounds brilliant: it was so rough and ready when we started the song, it sounds like a jam we just happened to capture on the day, and that’s basically what it was. We had the idea, we rehearsed it a lot before we went into the studio, but yet again it was left slightly open, so we could play whatever we wanted, and that’s what happened.

We played for six or seven minutes, which is a long time for an album track, and I’m kinda glad it takes up a lot of space on the album - I’ve heard a few different edits - because Eric Bell plays some unbelievable guitar on it. We seemed to gel and knit really well on that record, and that makes it my favourite Lizzy song.