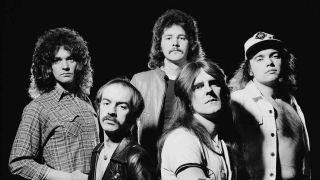 Saxon singer Biff Byford is not a man easily given to outpourings of emotion. In that sense he is as much a quintessential Yorkshireman as cricket legend Geoffrey Boycott. But when Byford talks about the day that inspired his band’s biggest hit, his face lights up. “It was magical,” he says.

That day, August 16, 1980 was when Saxon appeared at the first Monsters Of Rock festival at Donington Park in Leicestershire. And the reaction they got from the 60,000-strong crowd had a huge effect on Byford. “It was something that hit you like a flash of light,” he says. “So you write a song about it.”

What he wrote was one of the definitive heavy metal anthems, a celebration of the music, its fans and the event that established Donington Park as a kind of holy ground for headbangers. The song’s title was And The Bands Played On.

The bill for Monsters Of Rock in 1980 featured, in descending order, headliners Rainbow, Judas Priest, Scorpions, April Wine, Saxon, Riot and Touch. When this line-up was first announced, Saxon were not a big name. They were one of the leading bands in the New Wave Of British Heavy Metal, alongside Iron Maiden and Def Leppard, but the first Saxon album, which had been released in 1979, hadn’t even charted in the UK.

Fortunately for Saxon, the promoter of Monsters Of Rock did them a favour. “Maurice Jones was a friend of ours,” Byford says. “He liked the band, so he put us on the bill.”

It was a decision that turned out to be a masterstroke. In April 1980, four months before Monsters Of Rock, Saxon had a huge hit with their second album, Wheels Of Steel. The album reached No.5, and two singles – the title track and 747 (Strangers In The Night) – made the Top 20. In the wake of this success, Saxon received a heroes’ welcome at Donington.

“When we walked on that stage we’d done 100,000 records,” Byford says. “I would imagine that 99 per cent of the people in that audience had got Wheels Of Steel. So it was fantastic for us. It was our first festival gig, the first time we’d played to an audience of over 3,000. It was a pivotal moment in our career, and our attitude was: ‘This the new generation of heavy metal, this is our music – fucking have it!’.

“We played for 30, 35 minutes – straight to the point, smash you in the face. It just flew by. And for me, being the frontman, it was even more special, because I got to connect with the audience.”

After their set, Saxon stuck around to watch the other bands and to enjoy the perks of the rock’n’roll life.

“There were lots of girls,” Byford says. “We shipped a few in with us. We were shagging in the dressing room, in the tour bus…”.

What he does remember, very clearly, is Rainbow’s performance. It was the first time that he’d seen Rainbow with singer Graham Bonnet, who had recently replaced Ronnie James Dio. “Without Dio, it wasn’t the Rainbow I loved,” Byford says. “But they were still great.”

As a result, And The Bands Played On would include a tribute to Rainbow. It was six months after the event that the song was completed. Although all five members of Saxon were credited as co-writers, Byford says that it was he and guitarist Paul Quinn who wrote the song’s catchy mid-tempo riff, inspired by a classic 1978 hit by Toto.

“We wanted something like Hold The Line,” he explains. “Paul and me were messing about on guitars, and we came up with this riff with that little flick in it.”

To this, Quinn added a brilliant lead melody that gave the song its signature.

The lyrics were Byford’s alone, and in them he captured a moment in time. He wrote about the atmosphere he experienced at Donington: ‘There was magic in the air’. He described the feeling he had on stage, looking out at the audience: ‘See the people, feel the power.’ He praised the headline band (‘The rainbow shining brightly’), and made a tongue-in-cheek reference to one of his own band’s best-loved songs (‘We were strangers in the night’). Most important of all, he made a connection between the bands and the fans, in the chorus, where the singer became the voice of the people: ‘We sat in the sun… and the bands played on.’

“We had a few songs where we wrote about our audience,” Byford says. “We did that on Heavy Metal Thunder and Denim And Leather. That’s why And The Bands Played On was a song that people could relate to.”

He explains that the song’s title was inspired by the famous story about the sinking of the Titanic, when the house band carried on playing as the ship went down. But he dismisses an old story about the original lyrics running to seven verses, with mentions for every band that played at Donington in 1980. “I don’t know who made that one up. I very rarely write more lyrics than I need.”

Released as a single in April 1981, And The Bands Played On peaked at No.12 in the UK. It remains Saxon’s highest-charting single. And for Byford it’s a song that will always have a special place in his heart.

“That first Donington was such an important landmark for us,” he says. “It was like a coming of age for the band, so that song holds a lot of good memories.”