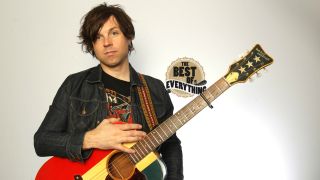 Not to be confused with his Canadian near-namesake (more on that later down the list), Ryan Adams began his musical career with alt-country rock’n’roll punks Whiskeytown before embarking on a solo career at the beginning of the millennium. Incredibly prolific, he’s released 14 albums since 2000 – most solo, but five with his backing band, The Cardinals. He’s also just finished recording a cover album of Taylor Swift’s ‘1989’. Straddling the line between rock ’n’ roll and country – and often a combination of the two – his songs can be both gently harrowing or rather more raucous, but they’re almost always defined by and infused with a sense of truly tragic melancholy. While the prolific nature of his songwriting means that quantity has occasionally got the better of quality, his discography is largely very solid. This, then, is just the tip of the iceberg – and doesn’t even cover the Whiskeytown years or that gentle reworking of Iron Maiden’s ‘Wasted Years’. Get your hankies ready…

*10. LIFE IS BEAUTIFUL (Cold Roses *bonus disc, 2005)
**Found on the bonus disc of the first of the three albums Adams released in 2005, *Tonight *is a song full of tension and desperation set on the late night streets of New York City. Epic and understated at the same time, it’s a near-anthem that deliberately stops itself short of becoming one, yet which is still full of the joy and wonder and marvel of life. Sure, there’s a little bit of hurt contained within – and between – its lines, but the most important line is the one that gives the song its title, and is something that everybody would do well to remember: “Life’s a beautiful thing/Oh, don’t waste it doll.”

*9. WONDERWALL (Love Is Hell Pt 1*, 2003)
**While this obviously isn’t a Ryan Adams original, his tender reworking of the Oasis super smash is so beautiful and majestic that takes on a life of its own. There’s nothing subtle about the Gallagher brothers’ original, but this version is nothing but nuance – tortured and elegant in equal measure – to become a whole new song. So much so, in fact, that Noel Gallagher even went so far as to say, in an interview, that he thought “Ryan Adams is the only person who ever got that song right.” Coming from Noel, that’s high praise indeed.

*7. NEW YORK, NEW YORK (Gold*, 2001)
**Written as a love song to an ex-girlfriend in the form of a letter to a city, this song took on extra special poignancy because of its video. Shot on September 7, 2001, most of the footage shows Adams playing the song in front of the skyline that, four days later, would be forever altered by the terrorist attacks of 9⁄11. As such, the song soon became a literal anthem for New York in a way that Adams could never have anticipated. 14 years later, its buoyant tune is a reminder that it’s just as important to celebrate the good times as it is to lament the bad.

*6. BLUE SKY BLUES (29*, 2005)
**On this slow and melancholy song, it’s someone else’s sadness that’s the subject, rather than Adams’ own. At moments, he almost channels the late Jeff Buckley he offers his support to the other person. Yet even though he’s offering himself as a crutch to the other person, he’s also being slightly defeatist (or perhaps just realistic) about the whole situation. “I can’t fight your blues/’Cause I know I’ll lose/What’s left of my mind/I can’t win/But for you I will try.” Still, it’s the thought that counts, right?

5. THIS HOUSE IS NOT FOR SALE (Love Is Hell Pt 1, 2003)
Gravelly and bruised, it’s Ryan Adams’ voice that shines most brightly here. Sounding like he’s just woken up after a night of booze and cigarettes, there’s something incomplete and vulnerable about his vocals which just adds an extra degree of inevitable misery to the song’s tone. “Tell ’em that the house is not for sale,” he pleads. “We’re still livin’ here, how come nobody can tell?” The song’s surroundings are then flooded with memories of the good ol’ days, but despite the sense of defiance that runs through the song – “We could grab a couple sheets/Yeah, give ‘em quite a scare/I remember lyin’ on the bedroom floor/You were holding me, little honey, kissin’ my soul” – it’s clear that, like so many of his songs, this is a tribute to something that’s lost forever. It’s also about the 1988 horror comedy Beetlejuice.

*4. OH MY SWEET CAROLINA (Heartbreaker*, 2000)
**In the course of his musical life, Ryan Adams has switched genres often, veering from country to rock’n’roll to ’80s soft rock to punk. He’s also a massive metal fan, and in 2010 released a metal album called Orion. But country is, perhaps, the genre he holds dearest and which he executes most effortlessly. Heartbreaker is an album which very much lives up to its title from beginning to end, but it’s this song, which features veteran country singer Emmylou Harris, that’s perhaps the saddest of all. Taking the form of both a literal and a metaphorical road journey, it’s a search for meaning in a life that doesn’t seem to have any, as well as a search for a home – and a sense of home – that no longer exists, and probably never will.

*3. KIM (Ryan Adams*, 2014)
**Since the beginning of his solo career, the similarity of Ryan Adams to his Canadian near-namesake has been a source of constant amusement to everyone but him. He even once threw somebody out of one of his gigs for requesting ‘Summer Of ’69’. But in 2014, Ryan gave into the Bryan baiting and wrote the best album the Canadian soft rock star never wrote. He even went so far as to parody/replicate the cover of the other Adams’ iconic 1984 record, Reckless. Like much of the record it comes from, this gorgeous track brims with mind-’80s production values, and could easily have been from one of Bryan Adam’s albums from the early to mid-1980s. But you know what? It sounds absolutely brilliant.

2. SYLVIA PLATH *(Gold*, 2001)
**Just from its title, you know that a Ryan Adams song called *Sylvia Plath *is going to be song full of sorrow. While it’s not about the late poet as such, its mournful, piano-led tune nevertheless conjures up her ghost as an erstwhile companion for the song’s forlorn protagonist. “I wish I had a Sylvia Plath,” Adams almost whispers with elegiac sadness. “Busted tooth and a smile / And cigarette ashes in her drink.” Of course, that companionship is less literal than it is a metaphor for depression, taking on the creativity it can inspire and the tragedy, as in Plath’s case, it so often leads to. It’s a graceful, gentle and tender eulogy, which is to say it’s Ryan Adams at his empathetic, sympathetic best.

*1. DEAR CHICAGO (Demolition*, 2002)
**Just like *New York, New York, *this short, sparse and simple track is disguised as a love letter to a city – and as such, is probably talking about the same relationship – but it reaches much deeper inside than that to extract the essence of true heartbreak. It contains one of the bleakest lines in his catalogue of bleak lines – “I’ve been thinking some of suicide/But there’s bars out here for miles” – which essentially ensures the protagonist’s self-destruction one way or another. Lo-fi and gentle, it’s a song that tries to move forward as it knowingly walks and looks backwards in to the abyss before plunging headfirst into it: “Sorry about the every kiss/Every kiss you wasted bad/I think the thing you said was true/I’m gonna die alone and sad.” That said, there is some hope at the end, as Adams declares, “I think I’ve fallen out of love with you”, but the delivery is so resigned and melancholy that it’s impossible to fully believe him.