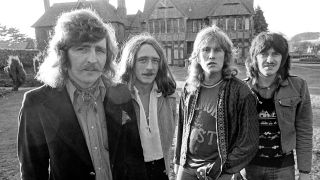 Along with Joe Cocker’s histrionic take on With A Little Help From My Friends and Country Joe & The Fish’s anti-war singalong The “Fish” Cheer/I-Feel-Like-I’m-Fixin’-to-Die Rag, Ten Years After’s frantic boogie through I’m Goin’ Home was one of the Woodstock Festival’s most iconic musical moments.

It catapulted the London blues band to instant mega-stardom in the US, and although their fortunes faded over the years, they deserve their place at the British Blues Explosion’s top table.

Thanks to its inclusion in both the Woodstock movie and the soundtrack album, this is Ten Years After’s best known track, one that, seemingly overnight, put them on the map. Of course, there have been numerous other high-energy boogies over the years, such as Cactus’ Parchman Farm and Foghat’s Honey Hush, but this TYA track surpasses all others in speed, ferocity and deadly precision.

Taken from an album where the band really took their time, spread their wings and crafted what is pound-for-pound their strongest and most diverse collection of songs. With lyrics like ‘Tax the rich, feed the poor, till there are no rich no more’, the song is a product of its time, taking the standard countercultural position on social issues, and was viewed by many as a condemnation of the Vietnam War. This was their biggest and only real US hit and the fact that they never played it live tells us where their heads were at. And possibly why they were never bigger.

Search out any of the live versions on YouTube and watch how Alvin and Leo Lyons face off in a guitar and bass showdown at two-and-a-half minutes in. Most people think Alvin was the star of the band but it was equally about Lyons’s energy – a ferocity he still has today. He’s one of the most underrated bassists in rock history.

This was a minor hit in the UK and the centrepiece of their monster 1970 showing. The straightforward yet highly effective riff that propels the song simmers for just the right length of time in the intro before the drums and keyboards crash in for maximum impact and damage. It’s one of those classic riffs you can never tire of.

If I’m Going Home is the most obvious choice, then this track is the coolest. It is a unique song in the TYA canon, commencing with bizarre feline noises (courtesy of the album photographer’s cat) before diving head first into an assault of proto-metal fuzz guitar that slashes and burns right to the end. It’s all driven by the band’s manic rhythm section together with Chick Churchill’s fiery piano. Throw in a bluesy shuffle mid-song, add a cool yet distorted vocal effect and you have one of the band’s boldest, heaviest and most daring compositions from their heaviest record.