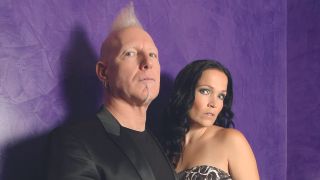 Since leaving Nightwish, Tarja Turunen has built a name for herself as a solo artist, working on albums that leave pomp at the door for an endeavour more diverse and even proggier in flavour. Yet at the soprano’s musical heart is a wilful passion for classical music that has manifested itself, with the unwavering cooperation of drummer Mike Terrana, in a world tour named Beauty And The Beat. One particular excerpt from the tour, which sees Terrana playing drums along to the likes of Mozart and Bach, has been packaged up in a DVD. Prog finds out what it’s all about…

This tour sounds like a grand and challenging undertaking. Were you nervous about venturing into the unknown?

Tarja: It was a very demanding and very challenging production with many people involved, and many rehearsals were needed with each of the orchestras. The conductor was crucial because he needed to understand the music and then deliver the message for the orchestra. We are not only playing classical pieces that are very familiar and known by the orchestra but rock pieces too, and in some cases there were conductors who had never worked with rock or contemporary music. That was the demanding part.

Mike: The conductor in Romania was like, “I don’t understand what you are doing – it’s very loud!” And I’m like, “Yeah, I know. I’m playing rock music!”

You must have had some strange reactions from the classical purists…

Mike: These people are used to playing classical music without this madness beneath it, so I think some of them were shocked, but it was fine. But the first day with the orchestra was strange because I’m not a classically trained musician.

Tarja: And it’s not very common to see a rock drummer playing with a live symphonic orchestra.

So why risk it?

Mike: We’re trying to turn young people on to classical music. A lot of orchestras need that, they need to bring young people in and show them it’s cool. And maybe these kids will watch our show and then go and check out more classical music… but without the jokes and the drumming.

Did you ever feel like you were out of your comfort zone?

Tarja: Vocally, it was demanding because I was going from purely classical pieces to a rock piece and then back to classical. The switch is difficult so I always had a little break, but I trained a lot before the tour and I worked really hard.

Mike: I realised I had to approach things differently and not play like I do with a rock band. The volume of the snare drum alone is 120db – that’s the sound of a jet engine, basically. So I put tape on the drums, I used thinner cymbals and of course I tried to play as dynamically as possible to fit in with the orchestra and not dominate them. It’s actually not as easy as it looks. Sometimes the conductor would leave and would allow me to drive an orchestra of 120 people. It was very cool, kind of like holding on to the reins of a big, strong beast.

Mike: I made an album called Sinfonica which had drums with classical music. I thought, “What would it be like if I could travel back in time and hang out with Mozart, jam and put drums to his music?” He’s probably spinning in his grave but I tried to do justice. Then I thought it’d be nice to package it with Tarja’s songs.

And did your drumming lend itself to the music?

Mike: Funnily enough, if you listen to the rhythm of the_ William Tell Overture_, you’ve got Iron Maiden right there.

Tarja: And that’s the cool thing. I’ve been asked so many times, “Where are you more comfortable, in rock or in classical?” And it’s a ridiculous question because I feel like they complete me. On one hand, classical gives me the roots and keeps me training and focused, and rock gives me the liberty, the freedom and the fun. So when they are united [claps hands together] it’s fantastic!

It seems like you had a lot of fun doing Beauty And The Beat.

Tarja: Entertainment is the whole idea – we make a lot of jokes. It shows people that classical music can be fun.

Mike: My cousin was a magician and we’d go to magic shows together so I end up doing stuff like this [grabs pen and does the rubber pencil trick, where the pen appears to wobble as if made of rubber]. I still pull chicks with this material.

Did your sense of fun rub off on the others?

Tarja: One of the Russian guys came to my backstage room and said, “Okay, let’s practise a dance.” And then he made me do the dance live in the middle of the concert. It was crazy but I enjoyed it.

Was it a culture shock going from Russia to Mexico?

Tarja: In Russia or in Finland, classical music is part of the daily life, but in Mexico and Peru it’s not like that, so then you start feeling the difficulties. It was more demanding and time consuming for us to make the orchestra sound at the level we needed. We had to drop some songs because of the lack of time.

Mike: It’s a different work ethic. For example, as you go further south in Europe, people work a little slower and are not so organised so you just have to say, “Okay, we’ll do it like you do it.”

Can we expect to see the return of Beauty And The Beat?

**Tarja: **This is a lot of fun. It was difficult to get shows at the beginning because promoters didn’t understand what this was about and it’s quite complicated to put in words, but the DVD will help to explain it. We really hope to take this on the road again.

Anything we can expect to be done differently next year?

Mike: I would like to be shot out of cannon, do a somersault and then land on Tarja’s shoulders.

_Beauty And The Beat is out now from earMUSIC in 2CD, DVD, Blu-ray and download formats. See www.tarjaturunen.com for info. _