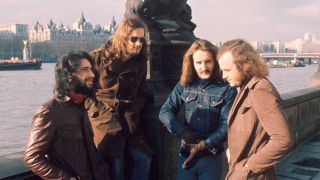 Ground-breaking TV music program The Old Grey Whistle Test had been on air for only a year when Focus arrived at the BBC TV studios in mid-December 1972. That week’s edition was already pretty solid – film clips of Marc Bolan and John Lennon, a live set from The Crickets – but it was the relatively unknown Dutch band who stole the show. Their scintillating performance of two instrumentals – Sylvia and Hocus Pocus – had everybody talking.

For presenter Bob Harris, Focus were Whistle Test’s ‘big bang’ moment. “They were an absolute sensation,” he remarked. “We discovered that we had an audience out there and it numbered in millions.”

With the band’s third LP still new in the shops, their label Polydor quickly rush-released Sylvia as a single. By the new year, both Sylvia and parent album Focus 3 were in the upper reaches of the UK charts. Sylvia was a stunning expression of the band’s virtuosic talent. Led out by Akkerman’s terse guitar riff and the tempestuous rush of Thijs van Leer’s Hammond organ, it’s both breathless and measured, alternating between blazing rock and a more melodic kind of European prog-jazz. Van Leer’s wordless Tyrolean yelp is thrown in for added pizzazz.

The majesty of Sylvia contrasts with its beginnings on the Dutch stage circuit some years earlier. Van Leer wrote the song in 1968, when he was a member of a theatre group. Originally a lovelorn piece of drama, with lyrics by Linda Van Dyck, it was presented to singer Sylvia Alberts for her solo spot in the show. “It’s actually a cabaret song,” Akkerman explains. “He wrote it for Sylvia Alberts and probably had something going on with her.”

However, Alberts didn’t care for the song at all. Van Leer, who co-founded Focus the following year, decided to store the music away for the time being. When it came time to start work on Focus 3, he dusted it down and asked Akkerman to shape it into something fresh on electric guitar.

“In my younger years I used to listen a lot to marching bands,” Akkerman explains. “I heard some guy on trumpet in one of these bands, and he had such a beautiful tone, such beautiful phrasing. So the song’s timing and phrasing come from there. The first and second verses were both done in five minutes, so altogether it took ten.”

Van Leer decided to call the finished version Sylvia as a teasing reminder to Alberts of a missed opportunity. By the time Focus recorded it at Olympic Studios in Barnes during the summer of 1972, they were already breaking through on the international circuit. Their first UK tour coincided with that year’s energy crisis, when the miners’ strike resulted in a series of power cuts and the three-day week.

“Our manager had a stroke of lucidity,” Akkerman recalls. “He brought a power generator over with us, and we were playing at London University when the strike was on. There was nothing else for people to do, so the only possibility – was to go and catch the Focus drift. At the show, they were exposed to all this yodelling and other stuff. They didn’t know what the hell was happening. It was an eye opener!”

Through a combination of serendipity and sheer aptitude, Focus had swiftly established themselves as a new hot property. They played at the Reading Festival in August ’72, followed by a Melody Maker Poll Awards show in London, where they very nearly upstaged Emerson, Lake & Palmer. Second LP, Moving Waves inched up the charts, NME voted them Best Talent Of 1972, and Melody Maker crowned them as the year’s Brightest Hope. All of which meant that Focus were well primed by the time The Old Grey Whistle Test broke them on a national level. “I knew this band was going to be

“I knew this band was going to be huge,” states Mike Vernon, who took over as Focus’s long-term producer with Moving Waves. “But it happened so quickly. One minute they were a band you’d never heard of, then the next you couldn’t get into the gigs. Jan Akkerman and Thijs van Leer were two very strong characters, both incredibly good musicians and very creative. Thijs would play these extraordinary flute solos and play the organ at the same time. I don’t know how the hell he managed it. Then Jan would rip hell out of his guitar and completely destroy what Thijs had just done. So Thijs would respond by doing the same thing on the organ.”

Focus consolidated their status with extensive tours of the UK and America throughout 1973. They enjoyed another huge hit single that year with a reissue of Hocus Pocus, and readers of Melody Maker voted Akkerman the world’s greatest guitarist. But the band ultimately couldn’t sustain two forceful egos. The run of commercial ended when Akkerman and van Leer clashed over musical direction following 1975’s Mother Focus.

“In the heyday of the band I had a hunch that Thijs van Leer would take the name Focus for himself,” says Akkerman, who has since released over a dozen albums under his own steam. “I was quite famous by then myself, so that solved the problem for me [about going solo].”

He and van Leer aren’t exactly on each other’s Christmas lists these days, but Akkerman nevertheless remembers the early 70s as “a fantastic time. Of course there was some aggravation as well, but that goes with the nature of the animal. I’m grateful that Thijs van Leer started to yodel, because it drew attention to my specific way of playing. I’m proud of the music we made as Focus.” And Sylvia is up there with his proudest moments. It’s all the more curious for the fact that, despite being a van Leer composition, it’s arguably Akkerman’s dazzling guitar that makes it what it is.

“Yeah,” he says with a chuckle. “Though he doesn’t think so!”