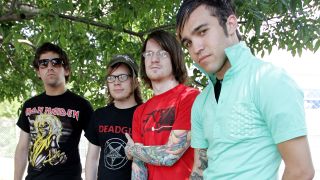 We started writing Sugar... when we were in Chicago, in a little practice space, but we didn’t get it right. There are so many iterations of this song, and a lot of them are kind of bad. There was a version that sounded to me a little bit like how America’s Suitehearts ended up sounding – not totally, but a little bit. That vibe.

He liked it, but again, it wasn’t compelling enough to anybody. Patrick [Stump, vocalist] had played this one version of it in a practice space in California, and I was like, “that one!”, but he couldn't remember it and kept going back to other versions. It was like an idea you come up with in a dream and can almost put your finger on, but not quite.

Luckily, he did figure it out in the end. Back then, though, we fought with each other a lot. All he cared about was the way the melody sounded and all I cared about was the words, so we really fought over cramming these words in. Our label was like, “oh my god, this chorus has like, way too many words in it, it’ll never work!”

There’s no way to cram in 'loaded god complex' and all these lyrics when you’re totally enunciating. If he was enunciating the way that Brandon Flowers does, it would probably sound crazy. I think that he naturally sang like that anyway, so it really worked out. He wanted to do long, big notes where he’d never fully close his mouth, so it led to this Sia effect. You’re like, “I don’t really know what he’s saying, but the melody is cool”.

So it was just one of those songs. He had Dance, Dance fully formed, but this one we really had to work on and put together. Both Neal and Tom Lord-Alge, the guy who ended up mixing it, I would heavily credit them both for helping us sonically with that song. It was weird. We wanted tons of guitars and really open guitars, basically mosh guitars.

It was a weird song to try and pitch to a major label, but somehow it just worked.