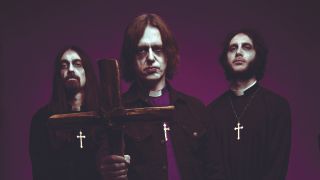 “The records that have helped me in life aren’t necessarily the ones that are very happy. If I felt like shit and listened to something completely nihilistic, generally at the end I’ve felt cleansed and happier, you know?”

Heaviness is as much a vocation as a desirable musical quality. When Lee Dorrian announced that Cathedral were to go their separate ways in the spring of 2013, the likelihood that the celebrated doom metal evangelist and Rise Above Records boss would make a return to the spotlight any time soon seemed, at best, remote. Having built a towering legacy over the course of 21 years, Cathedral had said all they wanted to say and Lee found himself in a situation where he needed to channel all his energy into steadying his label’s business affairs. But in keeping with his notoriously tireless pursuit of ultimate heaviness via the majesty of the riff, the allure of the doom code has proved too much for him to withstand. The result is With The Dead, a band featuring Lee on vocals and original Electric Wizard members Tim Bagshaw and Mark Greening on guitars and drums respectively. Both the first offering from a British doom dream team and the most gleefully raw and grim thing that any of those involved have produced to date, With The Dead’s eponymous debut album came about when Tim and Mark started plotting a new project, contacted their old label boss to see if he would be interested in releasing something and then, with only the slightest dash of audacity, asked him if he might possibly fancy dusting off his vocal cords and leading this new band from the front.

“I didn’t really have any major ambitions to be in another band,” Lee admits. “But then I never really had any ambitions to be in a band in the first place! What Tim and Mark were doing sounded really cool, really dark, nihilistic and heavy – the usual ingredients that would turn someone on if you like this kind of music. I thought it sounded really raw and really direct. There was no fucking around. In recent times that’s something that’s been missing in heavy music. People try too hard and production is too polished and it all sounds forced. This was back to how things should be. So they asked me to do it, but at first I hesitated… and then I said yes. It’s all been very spontaneous.”

This is a result of all the hatred and negativity that I’ve been dealing with.

Dedicated observers of the doom realm will, of course, be aware that there is a certain contentious backdrop to With The Dead’s emergence. While quietly reluctant to go into the details – “I don’t like hanging out dirty laundry in public, personally. I’m a pretty private person,” Lee notes – a rather messy legal dispute between Rise Above and the current Electric Wizard lineup (which Lee won at considerable financial expense) and some rather undignified and confused public attacks on Lee’s integrity made by that band’s frontman, Jus Oborn, have soured a relationship that stretches back to the early 90s. As a result, the fact that Lee has now joined forces with two estranged Wizard alumni could easily be interpreted as some kind of creative riposte to a regrettable war of words.

“The fact is I haven’t fallen out with Electric Wizard, just one of them!” Lee laughs. “Mark and Tim are the original rhythm section and I still get on with them, well enough to form a fucking band with them. And if that doesn’t tell you something, I don’t know what does! This band probably wouldn’t have happened if they’d all been cool with each other. The thing is, Jus has opened up this can of worms and made it a public slanging match. I’d much rather have discussed it man to man and done it like grown-ups, which I offered him the opportunity to do many times. I’d been an Electric Wizard supporter from day one, the biggest supporter they’ve ever had. I was there when no one gave a fuck.”

Regardless of spiky machinations behind the scenes (and, indeed, in full view of the online world), there will inevitably be comparisons drawn between With The Dead and both Cathedral and Electric Wizard. But what comes across most strongly on the trio’s debut is the sheer venom that oozes from every despondent, antagonistic riff and every embittered, incensed lyrical proclamation. Eschewing the sometimes fantastic and almost cartoonish imagery that Cathedral wielded with such skill and imagination in favour of a brutal and focused lo-fi attack, With The Dead is doom at its most hostile and grimly exhilarating, with songs like Crown Of Burning Stars and Screams From My Own Grave amounting to a sustained venting of Lee’s spleen.

“It’s a lot more raw and primitive than anything Cathedral would have done, except maybe Endtyme or Forest Of Equilibrium,” Lee muses. “It’s got that pure anxiety and animosity. It’s probably come as a result of all the anger and hatred and negativity that I’ve been dealing with. I didn’t spend a long time writing the lyrics, whereas in Cathedral I’d spend weeks on a verse. This was a lot more punk and straight from the gut. Not having a band to get that out through for a few years, when you’ve had that platform for many years, that’s one of the things you really miss. So being asked to do this gave me the perfect platform to let off some steam. Which I think I did! Ha ha ha!”

Anyone expecting Lee Dorrian to make a wholesale return to the recording and touring life may find themselves disappointed, as he insists that “nothing much has been planned or even thought about yet,” and that while there is a distinct possibility that the band will perform at Roadburn in 2016 – where Lee will be curating a portion of the legendary festival’s bill – and that other live shows are “a definite possibility”, there are no clear plans beyond a collective hope that With The Dead may be an ongoing concern. What seems to matter most here is that the rejuvenative and inspirational power of seriously fucking slow and heavy metal remains a force that still blazes within Lee, Tim and Mark’s creative souls, and that as the world crawls inexorably towards its inevitable and well-deserved demise, embracing the power of doom makes more sense than ever.

“We’re surrounded by death all the time, whether it’s people’s relationships dying or the selfish ways people treat each other, and the way the world is becoming more and more self-obsessed…” Lee states. “Before this band started I was living on my own for a year and a half, without a TV or much contact with the outside world except for doing the label. I walk around London in my own little world and I do feel a bit isolated, even though I’m among millions of people. I’ve talked about all these things before, but there would usually be some kind of positive aspect in there, but this record isn’t very positive at all. But then when you write stuff that is very nihilistic and very ‘fuck off’, it’s a cliché, but it really is a good exorcism.”

*WITH THE DEAD* IS RELEASED ON OCTOBER 16 VIA RISE ABOVE