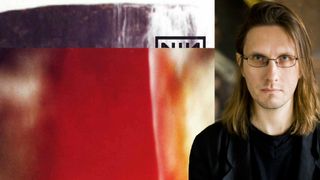 I got into Nine Inch Nails with the previous album, The Downward Spiral. I can’t remember why I particularly picked up on them, but it totally blew me away when I got it in 1994. Production-wise, it sounded like nothing I’d ever heard before. And I’ve always loved industrial music, very repetitive music. That’s something I’ve kind of grown up with too. Reznor was using industrial music and fusing it with the great albums I grew up with in the 70s, the progressive rock and concept albums. He was doing that in a completely contemporary way. The same kind of ambition and a very alienated perspective on the world, almost in the tradition of people like Roger Waters in his lyrical perspective. And no less ambiguous when it came to making huge monolithic statement records.

The Fragile is really the zenith of that for Reznor. In a sense everything has been a continuation of The Downward Spiral.

The scale of The Fragile is huge. He worked on the record for five years, and there’s something about it. Two hours of music that has everything from instrumental interludes and instrumental overtures to conceptual continuity and themes that would reappear in later songs. It seems to have a scale and conceptual unity that maybe the other records hint at. This, for me, was the masterpiece.

It also has a lot of other musical forces; [guitarist] Adrian Belew is on the record, as is Mike Garson, the piano player who worked with David Bowie on Aladdin Sane. There’s a sense he’s reaching out to other generations of musicians. I like that feeling of completing the circle in terms of using musicians from generations. Bob Ezrin, who worked on that other great concept album of the 70s, [Lou Reed’s] Berlin, is credited with ‘providing continuity and flow’ as well. And I definitely see The Fragile in that conceptual tradition for sure.

The people who’ve influenced me are not the musicians, not even the singers, but the auteurs, the people who have the whole vision for the whole song and the whole sound. You have someone like Reznor, who thinks of an album on a higher level than a collection of catchy radio songs. He’s created a whole aesthetic vision that’s totally his own.

Steven Wilson: Everything You Need To Know