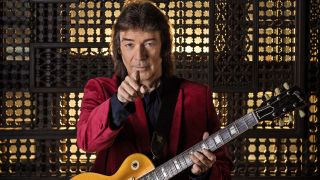 After a quarter-century of releasing solo albums, you might expect Steve Hackett to at least consider resting on his laurels. But he’s having none of it. His new album, The Night Siren, finds the guitarist in fierce form, tackling extremism and intolerance in his lyrics while continuing to push against musical boundaries. The instrumentation includes Celtic Uilleann pipes and Peruvian churango, and the music ranges from flamenco to symphonic rock, while singers unite from all sides of the political divide. Classic Rock caught up with Hackett during rehearsals for his forthcoming Genesis Revisited With Classic Hackett tour, which kicks off in April.

You’ve made twenty-five solo albums since leaving Genesis. Have you ever thought about slowing down?

I thought I’d go for the John Wayne award. How many movies did he make? I’ve got a while to go, and a few more albums to churn out. I just think that instead of getting older and slower I should get older and faster.

How did you approach the recording of The Night Siren?

I started with a guitar solo. The whole process of songwriting and recording means that the guitar playing often ends up being the last thing on the agenda. But this time I thought, “To hell with that – why don’t we start with a couple of chords and a freewheeling guitar solo?” So I started with the end of one of the songs, Anything But Love. And I know that’s arse-about-face, but it meant that I started with the icing of the cake, rather than the cake itself. I’ve found that this is the right way to do it for me. It means I always come in fresh, doing what I’m known best for, and the music doesn’t suffer from a lack of energy.

The other thing I do is I collect data. For instance, when I was in Hungary doing [2015 album] Wolflight we had some very interesting stuff – a combination of didgeridoo and mute trumpet – and I ran out of time. So we used it on 50 Miles From The North Pole on the new album. This time round I was recording with some musicians in Sardinia, under the understanding that whatever came out of those sessions could be used by any of us, in any way. It was data for them and data for me.

You have to defeat all the obstacles that naturally crop up when you’re doing so-called solo work. Of course, in reality it’s a team, but as a solo artist you carry the can. You get all the glory and all the blame.

Are there times when you put these disparate elements together and it simply doesn’t work?

Certainly. The main thing when you’re experimenting is to ditch something the minute you find it’s not working. We had a whole other song that was supposed to be a bit jokey, and a bit dark, but it didn’t quite function in that way, and everyone who’d worked long and hard on it reluctantly admitted it. So I just used some elements on it that worked elsewhere. You’ve got to know when to ditch things.

How is The Night Siren different from Wolflight?

We’re using a United Nations of musicians from all over the world, not just my prog neighbours – people from Iceland, Azerbaijan, Israel, Palestine, Hungary and so on. I didn’t plan it that way, but we’ve got a very different album because of it. In the end it doesn’t matter where it comes from. And it’s not like I sat down and decided to make a world music album. I wanted to make a rock album. But using all these other elements took it rather outside its familiar source.

The other difference is the lyrics. We realised that two of the tunes had a peace message, so we bookended the album with them.

Are they protest songs?

The protest song is something that’s fallen into disuse. There are a couple of examples of the protest song on the album, but it’s my version of it, not just a man standing there with an acoustic guitar.

Some of the tracks, such as Behind The Smoke and El Nino, have a very ominous sound. Is that a reflection of the way you feel about the world?

It certainly is. Just about every journalist I speak to seems fearful, particularly in the US, and rightly so. The subtext of the album is unity, the idea that we can all work together, and age-old concepts of peace and love. The message is all-important, but those minor keys are also part of my DNA. I’ve always enjoyed ominous music. With the surround-sound mix of El Nino I wanted it to feel like you were at the eye of the storm, with everything going on around you. You’re under assault from the word go.

What makes you angry?

The lemming-like behaviour of politicians who follow instead of lead, and their lack of statesmanship. When I see that our leaders are more stupid than I am, it worries me. I’m not bright, politically speaking, but I think that things like globalisation and world peace are things we need to preserve and fight for.

I’m not just worried by Brexit, I’m terrified by it. I’ve been working freely in Europe for years, and I want to be able to come and go. I think borders are overrated, and we got rid of them in all but name in Europe. Now we’re in danger of losing the very thing we’ve been fighting for since the 1930s, and no one’s talking about peace. Everyone talks about train strikes and the economy, and whether we’ll be able to do deals with America and China and India, ignoring the fact that we’ve got this huge market on our border. And no one’s talked about protecting the rights of individuals who live and work where they choose. I don’t like mob rule.

An obvious question, given recent events: what do you make of Donald Trump?

If I can answer diplomatically, I would say that he has yet to prove himself to either his critics or his supporters. The worrying thing is that he has set people against each other, and it’ll be interesting to see what happens next. A number of people I’ve spoken to have suggested that he’s upset so many people he’s either going to get shot or impeached. So we’ll just have to see how far a leader can go with that maverick style, without co-operating with people. We’ll see if it leads to civil war, unrest, murders and riots. Black Americans are already starting to arm themselves. But if you were suddenly being marginalised, wouldn’t you do that too? Donald has got plenty of time to learn the craft of politics, and lots of work to do.

Do you consider what you’re doing now to be an extension of what you were doing with Genesis in the 1970s?

I think about this quite a lot, and I don’t normally talk about it. At the time, they were a band that needed me. I like to think that my joining had the effect of making them more professional, and more adventurous. So if I do professionally adventurous music, I’m carrying on in the same spirit. In those days I used to think you could break boundaries, but I’m a tad more modest now. Music is always changing, but all I think you can really do is juxtapose things that already exist. Being surprised by music is a function of being young.

What kind of set have you got planned for the upcoming tour?

I’m doing a set of my own stuff and a set of Genesis stuff, with an intermission in the middle.

Which Genesis songs will we get to hear?

I’ll be playing Eleventh Earl Of Mar, One For The Vine – I haven’t played that for forty years – Blood On The Rooftops, In That Quiet Earth and Afterglow, and we’ll also be playing Inside And Out, which didn’t make it onto the album [Genesis’s Wind And Wuthering]. It featured on an EP and is on a re-released box set, and it’s one of the best tunes we recorded at that time. I take great pleasure from playing that, and the band have been playing it extraordinarily well. I find it very emotional.

Wind And Wuthering is actually my favourite Genesis album.

It was one of our very best, notwithstanding the fact that I left at the end of it. I thought it was best to go out on a high rather than a low.

The five of you that formed the ‘classic’ Genesis line-up – Hackett, Phil Collins, Peter Gabriel, Mike Rutherford and Tony Banks – reunited for the BBC documentary Genesis: Together And Apart a couple of years ago. Are there any plans for similar projects?

There are no plans, but I’m always open to the idea. It would be lovely to do something with Peter again with all of us, providing we could find enough common ground. Although it’s possible, I suspect it’s improbable. It’s been a long wait.

So we’re not going to see you pop up on stage with Phil Collins this summer?

That’s interesting, isn’t it? I think I’ll be away gigging myself. But it’ll be nice to see him back there, back doing it.

Going back to your Wolflight album, it has that terrific cover photo. Tell us about the wolves.

It was daytime – although it was made to look like nighttime – and the wolves were extremely well‑behaved. Spending time with wolves can change your mind about them entirely. They were trained and incredibly responsive, and I had a wonderful day, both with the wolves and their wolf-cub young. I got to feed them, I got to play with their young… and I think they read my mind.

I think they’re more intelligent than dogs. You can almost interact with them on another level. If you show concern or affection to them they immediately show it to you, although they’re very reserved creatures. They look like large scary dogs but they were totally wonderful.

Since then I’ve had the need to befriend every dog I see, whether they’re a tiny little dog or a big one, and I try to find the key to them.

The Night Siren is released on March 24 via InsideOut Music (Sony). Steve Hackett’s Genesis Revisited With Classic Hackett tour runs from April 26 to May 19.

Steve Hackett on the cast behind solo album The Night Siren