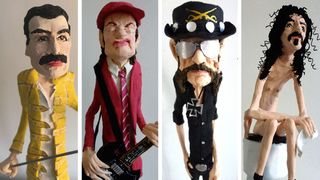 Many of our rock’n’roll heroes have been reproduced in doll form, from Lemmy’s Pop Vinyl figurine to a series of Slipknot collectables, but none of these can hold a candle to the brilliantly bizarre work of Berlin-based artist Marina Schmiechen.

Whether Marina makes a living from producing these figurines is unclear, but with prices for the 40cm high figures at around €900 Euros, we certainly hope so.

For more of Mariana’s work, which also features a series of Dictators, (including Vladimir Putin and Donald Trump), plus various stars of stage and screen, visit her Schräge Typen website.