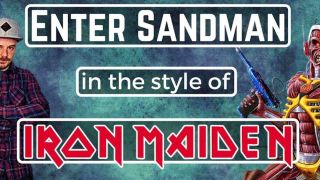 If you’ve ever got down on your knees and prayed to whatever deity you worship for an answer to the question ‘‘What would Metallica’s Enter Sandman sound like if it was covered by Iron Maiden?”, your prayers have been answered.

Unlike most of us, who have been spending way too much time playing Doom Eternal and chugging whatever cheap booze we’ve been able to get our hands on, Finnish YouTuber Metal Börje has used his lockdown time wisely by recreating Metallica’s 1991 mega-hit in the style of East London’s finest.

The results are pretty special. Close your eyes and you’re totally listening to the soaring Murray/Smith/Gers triple-axe attack recreating the Hetfield/Hammett crunch of the original. And while it’s disappointing that it’s an instrumental cover – thus robbing us of the opportunity to hear the epic line “Dreams of war, dreams of liars/Dreams of dragon's fire” delivered at maximum air-raid siren volume – then at least yer man has had the good grace to bust out a bunch of lookylikey paper masks of ’Arry and the boys.

If you’re interested, Börje has previous with this kind of thing – last year he gave the same song a Slipknot-style overhaul. And he takes requests too. So if you want to prod the hornet’s nest by getting him to serve up a Babymetal version of Master Of Puppets, you know what to do…