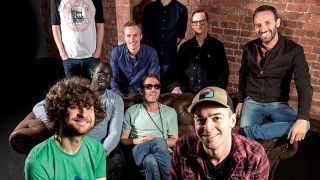 There was a lovely moment near the end of Snarky Puppy’s recent sold-out show at The Tramshed, Cardiff. The band had finished fan favourite Shofukan to wild applause and began trooping off the stage, only for the 1,000-strong Welsh crowd to sing the song’s hugely catchy brass hook back at them, arms in the air, eyes closed, pulling the notes from their very souls. You could see all nine players looking out across the room, then back at each other, wowed, taken aback by the sheer love, and sheer volume. Later, their bass player, founder, leader and composer-in-chief Michael League would call this show “hands down my favourite gig of the world tour to date”.

He had plenty to choose from. Their 2017 series of shows is the most extensive and well-attended of Snarky Puppy’s 13-year career. It’s in support of their 11th album Culcha Vulcha, current holder of the Grammy for Best Contemporary Instrumental Album. The night before Cardiff they played their biggest ever date on their own ticket – Brixton Academy, 5,000 people. So after a slew of acclaimed albums, three Grammy wins and a tireless approach to touring, the Texas-formed, Brooklyn-based instrumental collective are no longer just whispered about affectionately by the muso, jazz fusion cognoscenti – they’ve almost risen without trace, a name known in ever increasing circles.

It’s interesting to read how fans of progressive music try to categorise Snarky Puppy within our niche world. While nothing quite captures their accessible, 2.0 fusion of jazz smarts, rock heft and rootsy textures, comparisons have been made with Return To Forever, Billy Cobham, Herbie Hancock, British jazz/psych rockers Nucleus and even Umphrey’s McGee. But one definite presence is the joyous, pioneering spirit of Frank Zappa.

“I love Zappa,” Michael League tells Prog. “I grew up listening to him. At Christmas, instead of listening to carols, we’d gather round and listen to Apostrophe!”

It’s the afternoon before the Cardiff gig, we’re on the tour bus parked behind the venue, League leafing through our recent Wind & Wuthering cover issue as we speak. Behind us, in a fully equipped and soundproofed Pro Tools studio, Snarky’s engineer Nic Hard is finishing the mix of the live record of last night’s Brixton set, to be sold on their website in a few hours’ time – quite the most pristine bootleg you’ll ever hear.

“Apostrophe is some groovy, funky ass shit,” say League. He’s wiry, friendly, shrewd and intensely bright, with a shock of what, during our photo shoot, his bandmates call “prog as fuck” hair. “Zappa was funny and complex, the humour was a way of putting the complexity of the music into the background. The guy was just amazing.”

Much has been made of the complexity of Snarky Puppy’s own music – which is jazzy, funky, melodic, eclectic, brass- and groove-heavy – and much has been written about the virtuosity of their 30-plus-strong list of players (on any one night there’ll be nine or more of them on stage). But League doesn’t like to pander to that aspect of their sound. “What you don’t want is to play every night to thousands of guitar players, because you’d be playing to people into technically impressive things. Everybody in this band happens to be a virtuosic soloist, but the band is about groove and melody and feel. Pat Metheny mentioned us recently and he singled us out for our melodies. I was so pleased that out of everything, that’s what he picked out. We make sure what we write is easily digestible but without sacrificing depth or musicality.”

Born in 1984 in Long Beach, California to a military family, League fell in love with music in high school, with Motown legend James Jamerson and Bootsy Collins among his bass heroes. At 20 he enrolled on the Jazz Studies course at the University of North Texas, a major music institution in the States (the likes of Allan Holdsworth would lecture there on the intricacies of music theory), and later League would be mentored by former Miles Davis keyboardist Bernard Wright.

In his freshman year, League founded what would grow into the Snarky Puppy collective, ‘The Fam’, now based in Brooklyn. Their current core includes keyboardist/trumpeter and fellow UNT alumnus Justin Stanton and London-born keyboardist Bill Laurance.

Among other regulars shining at the Cardiff gig are saxophonist Bob Reynolds, sax/woodwind player Chris Bullock, guitarist Chris McQueen, and the extraordinary Canadian drummer Larnell Lewis. They’re all highly active on the jazz scene, with their own careers as recording artists, educators and session men, working with artists from Erykah Badu and Aretha Franklin to Willie Nelson. Snarky’s palette is a broad one, and their recording method is unusual.

Their debut The Only Constant (2006) was followed quickly by The World Is Getting Smaller (’07) and Bring Us The Bright (’08), but while the band were starting to gain momentum on the live circuit in UNT’s home town of Denton and across the US, their loyal gig-comers were complaining. “They didn’t like our records,” says League, “and said they understood us much better live. So for our next album we decided to try to have an audience and film it. It seemed like common sense.”

Recorded in the studio before a live crowd, 2010’s Tell Your Friends saw a shift in environment that affected the band’s approach. With just the band in the studio each player would want their part to be technically perfect, while in front of an audience, they had to communicate directly with the listeners present. It’s a subtle shift that League says put their performance on a more musical plane. Until Culcha Vulcha, all subsequent records were made in front of a live audience and filmed. Their 2013 work Family Dinner featured guest vocalists, and their take on Brenda Russell’s Something with Lalah Hathaway – daughter of late soul great Donny – earned them their first Grammy, for Best R&B Performance. The offers started pouring in, on condition the band tour with Lalah.

“And we said no to everything,” says League, “because we knew it was the kiss of death. After that no one would have wanted us to play on our own. It’s never easy to say no to money when you’re broke. After Family Dinner I had 110 dollars in my account. I had to leave during rehearsals, fly from Virginia to New Orleans to play a corporate gig so we had money to make the album. It really has been hand to mouth for a decade.”

Recorded with the Netherlands Metropole Orkest, 2015’s Sylva earned them another Grammy, for Best Contemporary Instrumental Album. Last year’s Family Dinner II featured more special guests, from Malian Afropop star Salif Keita to David Crosby, who was vocal in his approval of the band’s style. League produced and released Crosby’s last album Lighthouse on GroundUp, the label he set up originally to release Snarky’s own catalogue, and which now is a taste-making production house in its own right.

“There’s been no sudden uplift,” says League. “Every time we’ve won a Grammy or when an important musician like David, Metheny or Prince has said something nice about us, there’s been a slight peak in the slope, and we’ve really taken advantage of social media too. [Renowned sax player] Chris Potter sat in with us at Cheltenham Jazz Festival this year, we put some footage up and that sparked interest.”

Chick Corea was at Cheltenham too, which brings us back to that f-word – fusion. League says Snarky Puppy’s ranks are divided over Return To Forever (though all agree Light As A Feather is a great record), and also the fusion tag regularly tied to them.

“We actually talk about this all the time on the bus! Fusion’s like the jazz stepsister of prog rock, and like all genres, it’s got some amazing music, but the vast majority is defined by certain characteristics I don’t want associated with this band at all – over‑athleticism, virtuosity and complexity for their own sake. I don’t want to attract people waiting for us to play a lot of notes. I want them to come to be in a vibe and an atmosphere.

“Anyway, our most complex, nerdy stuff is intentionally veiled. All my favourite records are that way – there’s some polyphonic shit happening on D’Angelo’s records – sometimes all the instruments are in different keys, but you just feel the soul. Prince, Earth Wind & Fire, Quincy Jones’ work with Michael Jackson – you can get deep and say, ‘Wow, this one line’s a metric superimposition,’ but the complexity’s hidden under this undeniable feeling, the feeling you get when you listen to a record like Off The Wall.”

Weather Report are a mutual band favourite; Mahavishnu too, though League prefers McLaughlin’s work with Shakti. “My own sense of fusion comes more from Herbie Hancock’s Head Hunters,” he says, “more of a black, groove-based sense of fusion rather than the prog rocky side.”

Among the bands on that prog rocky side, ELP, Yes and Jethro Tull are beloved by numerous members, and of all of Snarky Puppy’s own records, 2013’s We Like It Here – which contains that Cardiff crowd-pleaser Shofukan – is the record League reckons a prog rock fan might get the most out of. “There are riff-based, virtuosic elements to the soloing – maybe that muso side is more on display. And Justin has a tune on there called Outlier, which is just such a proggy title!”

However you choose to label League’s ascendant collective, their own progressive, award-winning, ‘funky ass shit’ is earning them a rapidly growing audience. When you’re selling out big venues worldwide, when thousands of fans are singing your horn lines back at you at the top of their lungs, and when you’re led by a guy for whom Don’t Eat The Yellow Snow is a Christmas carol – something good is clearly happening. Snarky Puppy are outliers no more.

Culcha Vulcha is out now via Ropeadope. See www.snarkypuppy.com for more information.