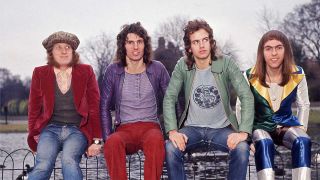 "Getting into a band and playing in a band was my first priority in life," says Slade's Dave Hill. "I'm 73 now, and still doing it, still playing to thousands of people.

"I've booked a ticket for a lifetime. Now I've got loads of grandchildren, and I'm the rock'n'roll grandad. I'm older than the Rolling Stones!"

He isn't, but you get the point. Slade have been around for a long time, turning in the process from glam-stomping chart toppers to undeniable national treasures.

To celebrate, they've released Slade: Feel The Noize - The Singlez Box, and we asked none other than their legendary guitarist Dave Hill to tell us all about it.

Coz I Luv You

"I think was the first song that Nod and Jim wrote together. I don't think it took them very long. Nod has his acoustic guitar and Jim had his violin, and they played in to Chas Chandler.

"I remember playing it to my sister, and she said the hairs on the back of her neck were tingling. All of us in the band were thinking, "we've got something here!" It was our first number one, which in Wolverhampton was like wining the football pools."

"We needed a follow up with this kind of drive, and basically it's just a simple rock song. It had a great riff, and was done fairly quickly because of the impact of Coz I Luv You. It was a good number one for us, and very popular abroad.

"At the end of the day it's about a relationship, or it's about home, and it's a great opening track to a show. We often start with it because it gets the audience clapping. Once again, another stomper."

"We went down to Chas Chandler's house in Surrey, where he had a barn. We went in with with the gear – we took the road crew down – and we had three songs. One was Look At Last Night, which we thought was a really good song, and another was Mama Weer All Crazee Now.

"We're thinking that Look At Last Night sounds a bit like Coz I Luv You, and we've got the follow-up. But as soon as we played Mama Weer All Crazee Now, Chas was right on it. It's got a bit of a Stonesy sound about it, great lyrics and a hooky chorus.

"It went on the radio and rattled up the charts really quickly, and I think it set the stage for the later big ones. Mama Weer All Crazee Now describes the audience, the fun, and the noise."

"We were doing one of these bizarre American TV shows , being interviewed by a woman named Jane. She kept on using funny words and I think Nod made a note of what she said.

"Sometimes songs can come from something you read in the paper, or an experience you had on the road, but we just went into the studio and just played it off on the hoof. We just rattled it off and I think that a bit of magic took place."

"This was a huge hit, and the beginning of the run of songs that went into the charts at number one. Oasis covered it, and Quiet Riot had a number one with it.

"Chas played it to the record company, and they were really jumping about about it. And then Top Of The Pops decided to have us on the week before release. I always had costumes that were bizarre and different, and when you go on Top Of The Pops you want to look better than anybody else. You want to be remembered.

"I made a costume that was almost like a nun's outfit, black from to from the neck down to the floor. Then I stuck mirrors all over it. And then I got this headdress, which was silver with mirrors all over it. I go into the toilet to change, and none of them saw me until I came out the door, and everybody fell about laughing. It was so funny!"

"There's some awkwardness about this one. We'd done Earls Court, and it was mayhem. They'd put on extra trains to get fans into the venue. There was glitter all over the carriages. We'd gone straight to number one, and when we went home from from Earls Court we got the bad news that Don, our drummer, had been in a serious accident, and that his girlfriend had been thrown through the windscreen and killed.

"So we're number one, but Don is in hospital, and we couldn't appear on Top Of The Pops. It's number one for several weeks, but we've got this tragedy. Thankfully he survived, and the song stands up. It was a great follow-up."

"This was a very big hit record in France. If you listen to the record you'll notice it's predominantly piano, with bits of guitar from me, but it's a real good, novelty record. It's very upbeat, a little bit Beatle-y, a little bit Martha My Dear, a little bit Ob-La-Di, Ob-La-Da.

"We were in the studio, and Jim's a very talented pianist. He was playing the piano, and it sounded better than playing big heavy chords. It just wasn't that sort of song.

"On Top Of The Pops Nod wore a huge long tie, which went all the way down to the floor. I've never seen anything like it!"

"One of the best ballads we ever wrote. It's personal. It's beautiful. I'd say it's a bit like Yesterday by Paul McCartney. It's the kind of song you could just strum on a guitar and sing to somebody, but we put our stamp on it.

"It's very simple, with very good lyrics, and is very popular with our audiences. When we're playing it you could stop the song and the crowd carry on singing. That's always a good sign. It's one of those songs."

"It's a reflective song about missing home. We were staying in a hotel near the Mississippi River, and we had the night off. The steamers were going up and down the river and was so American, like something off Showboat. It was beautiful.

Nod said, "I've got an idea." And he said to Chas, "I've seen the yellow lines go down the Mississippi, I've seen the bridges of the world and they're for real." He was thinking of a song about traveling. And Chas told him to go upstairs and write in down, which he did.

"It's been a hit twice in Germany. I can never do a show in Germany without doing it, where it's almost bigger than Come On Feel The Noize. It's one of those songs."

"This is from a later period, but from before we remade ourselves after playing Reading Festival in 1980. We were surviving as a band, playing with AC/DC and Whitesnake. We were trying to move forward. I actually prefer the b-side, When I'm Dancin’ I Ain't Fightin."

"We didn't really have a deal. you know. It was hard, but thankfully the writing always continued. We didn't stop, and that's better than a lot of bands do."