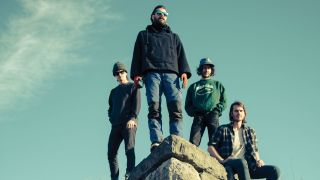 Although All Them Witches are often called a Nashville band, guitarist Ben McLeod is the only one of the four members – McLeod, singer/bassist Charles Michael Parks Jr, drummer Robby Staebler and keyboard player Allan Van Cleave – who actually lives there. “We started here, but really we’re an American band,” says Parks. “Like Grand Funk.”

In support of their fourth album, Sleeping Through The War, All Them Witches will soon be coming to a town near you to help you party down. Classic Rock caught up with the band over some dark-roast brew at Nashville eaterie Frothy Monkey.

The album is a collaboration with with Dave Cobb, whose work with Sturgill Simpson and Chris Stapleton has made him Nashville’s ‘It’ producer.

“In the past, we’ve recorded and written in the studio,” McLeod explains, “but this time we thought if we’re going to go do it with Dave, we need to be more prepared.”

“He wants to make art,” Parks adds. “Great records. He added a lot of ear candy, little bursts of melodies and psychedelic effects, using Mellotrons and tape delays. He melded with the band’s whole vibe.”

Taking a cue from Macbeth, the band invited three “weird sisters” to be musical foils in the studio.

“We wanted a record you could crank,” says McLeod. “And we wanted girl singers.”

For their funky ‘witches’, they tapped three top Nashville songstresses – Caitlin Rose, Erin Rae and Tristen. “I’ve been fans of their music for so long, it was an easy choice,” Parks says. “We gave them freedom to create their parts, and they were amazing. I think there was definitely an influence from those seventies-era Little Feat and Paul Simon records I grew up on.”

Despite the band’s name, don’t expect pentagrams, bloody sacrifices and the like.

The name was inspired by a book in the 1968 horror/thriller film Rosemary’s Baby. And in the same way that Black Sabbath attracted lunatic-fringe dwellers, All Them Witches occasionally find themselves meeting occult-ish fans.

“In Germany there was this super-tall, intense-looking guy waiting patiently to meet us after a show,” Parks says. “Finally, his turn came, and he said, in total seriousness: ‘Hi. When did you first meet Satan?’ And I said: ‘Um… I think you’ve got us wrong.’ He thought we were devil worshippers.”

The band did their own driving in Europe – and only lost one side mirror.

“It was a once-in-a-lifetime experience,” says a laughing Van Cleave, who did most of the driving. “I’d never been to Europe before. It’s hard enough to drive a British vehicle on British roads. Then we switched lanes in other European countries. It was out of control. Your spacial awareness gets all skewed. At one point I was driving in reverse in the middle of Paris.

“When we returned the van with a side mirror broken off, the rental place was cool. I think they expected worse.”

Henry David Thoreau is as much a guiding influence as Pink Floyd.

Like that great philosopher, the band believe in unplugging from the modern world. They’ve made a habit of writing and rehearsing in remote, woodsy cabins. “We see so many people when we’re touring, that seclusion is a big part of our lives,” says Parks, who says he can often be found in the woods with a tape machine, recording frogs”.

“Once you leave behind all the radio waves and car noises, it makes it so much easier to create,” Staebler adds.“You can find something deeper inside of yourself.”

In Trump’s America, ATW are part of the Resistance.

As the band gear up to tour at home and abroad, they look forward to “showing people the good, and not an ugly, face”.

“There’s no art in a vacuum,” Parks says. “And diversity is really what smooths off those rough edges. That’s been a constant in how we relate to the world, how we individually relate to our political experience and communities. Hopefully we’ll all come out of this shining.”

Sleeping Through The War is out now via New West Records.

Six things you need to know about Deaf Havana

Six Things You Need To Know About Deap Vally

Six things you need to know about Crobot