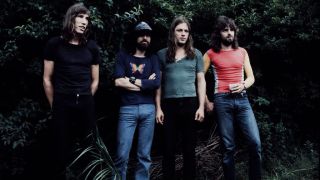 “It’s always about a boy, isn’t it?  When I was 14 I had a milk round in Harpenden and there was an older boy, about 16, who I had a crush on. So there I’d be, 5.30 on those freezing mornings in December, waiting to be picked up by ‘Ernie’ and his attractive assistant.

I knew nothing about rock music. But I was obsessed with Tamla Motown and Joni Mitchell, and I was a huge Melanie fan. This boy very quickly turned me
on to Pink Floyd and Roxy Music. To begin with, he lent me the first three Roxy albums and although I couldn’t get my head round them, I totally fell for them and would be listening to them for the rest of my life [and where Bananarama would get their name from, via Pyjamarama – Ed].

Then we progressed to the Floyd. They are in a place way above prog rock, they have a space all of their own. My first taste was Meddle – the whole of Echoes on side B – wow. I would send myself off to sleep with that, utterly fantastic. And next I heard Dark Side Of The Moon and although I preferred the trippier aspect of Meddle, I grew to really love Dark Side...’s depth and scope. Sadly, I never got to see Floyd, and by the end of the 70s I was a punk rocker. So that was it, you hid your Floyd records – and I now had an uneasy relationship with this thing called ‘prog’. My first proper boyfriend was an art student, and he took me to Frank Zappa – but I was bored to tears and fell asleep at the gig. He was really angry with me, he’d paid £3.50 for the tickets! But this same boyfriend took me to see Hawkwind at the Roundhouse, which was amazing, a sound and vision spectacular. I knew the single Silver Machine, which I loved. It was 1976 and here was a prog band that fitted with the punkier things that I discovering. They were angry, they were krautrock, they were trippy. Even today I would see them again. I hear they have the Angels of Death dancing with them, so I’m there, ha ha!

Many years later I revisited Floyd. I love the title song from Wish You Were Here very much and two years ago I did a version with my eldest son on guitar as a download from my website. Then, on holiday in Ibiza, someone started playing Syd Barrett’s The Madcap Laughs, which I’d never explored and it was a revelation. In my mind, people like him are seers, they’re not mad, everyone else is. They see the truth.”

This feature originally appeared in Prog 7.