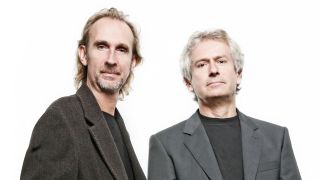 Mike Rutherford: Unfortunately, I caught the place at a pretty weird time as many traditions from the old English empire were becoming obsolete. I caught the brunt of those changes. A lot of kids ran away. Looking back, my parents’ generation had come out of two world wars and they were still numbed by those horrors and all of the deaths. Those enormous social changes came because they weren’t up to fighting anymore. Our parents were, a) not prepared to take us on and, b) maybe, after all they’d been through, they realised long hair and drugs weren’t all that terrible really.

Were you bullied at Charterhouse?

No, not really. I could look after myself.

Oh yeah… that was a regular thing.

And with hindsight, did you deserve it?

[After a moment’s pause] Yeah. They didn’t know the half of what I was getting away with.

Can the quest for academic qualifications come at a price? Some people – politicians, for instance – seem to leave higher education with a tragic lack of life skills.

Some don’t have a clue, I agree, but you can’t really generalise. At the moment there’s a natural tendency for everyone to go to university. That can be great for those that want to be doctors or lawyers, but I think that it’s also worth considering taking a job and seeing what life has to offer.

What was the most important thing that your schooling gave you?

Not very much. I wasn’t really cut out for school. I suppose it taught me how to get on with other people – maybe how to survive in difficult conditions. They always say that the people who’ve been to boarding school are the best equipped to survive being sent to prison. I can see the logic in that.

Your Charterhouse experience caused you to voice discontent with the privileged life at a boarding school.

Tony Banks: There was a lot of bullying and beating going on and from the age of seven you were locked away for three quarters of the year. Radios or record players were forbidden in the house, though that relaxed towards the end of my time there. Music – popular music – was pretty frowned upon. It’s not something that I wanted for my children. The happiest day of my life was waking up and realising that I didn’t have to go back there. But having said all that, there were good times as well as bad and I made some very close friendships that affected my life.

How much did your education shape you?

It shaped me a great deal. I had been a fairly shy boy, and it knocked a bit of that out of me. It did make me very aloof and for quite a while afterwards it [being an all-male school] made things difficult with women. It took a while to get over that.

What would your end of year report have said?

[Laughs] Well, that would depend upon the year, but by the time I left for University, the headmaster wrote: “He leaves on the crest of a wave with the tide running strongly.”

Have you attended any reunions?

I’ve not gone back to Charterhouse, no. I did attend a reunion of my prep school. I wanted to see if I recognised anyone. It was entertaining and I rekindled some friendships, but those events can turn into point-scoring, which I hate.

When we see a teacher being stabbed by a student in the classroom, as happened in Birmingham, it must make you despair for the system?

I despaired for the teacher, certainly. That was terrible. I’m not saying it’s consistently true in that instance but teachers can cause their own problems. It’s a profession that seems to attract quite a lot of militancy. But in terms of stabbings [pauses for a moment and then laughs nervously]: at my school, we did fantasise about that. There was a film called If.… [a satire of English public school life, 1968] in which the pupils rise up against the teachers. It’s something we dreamt of but we weren’t about to do it.