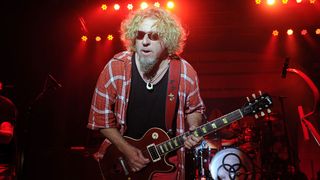 Sammy Hagar is many things: solo star, former singer with Van Halen, club owner, rum and Tequila magnate. And you can add willing victim of alien experimentation to that list.

It was back in the 70s, before he became famous with Montrose, that the Red Rocker had his run in with ET. At the time he was living near San Bernadino, California, dreaming of being a rock star. Then one night, he sensed something was amiss.

“I was just lying in bed when I felt something weird going on, like someone was tapping into my brain,” he tells Classic Rock. “At the time, I didn’t know how to fucking explain it. But they were downloading or uploading – that’s the simplest way to put it.”

Hagar says that he was instantly aware of who was behind it. “Oh, I could see them – two guys on this little hillside. They were playing with a numerical code but it wasn’t from our numerical system. And then, suddenly, this telepathic connection broke. And I could actually see them go back to their ship in a beam of light – zap, like lightning. For a second there was an infinity of white. I couldn’t move. And then it was over. It scared me nearly to death. It was an experience I couldn’t understand.”

When he calmed down, Hagar began to process what had happened. And that’s when his future began to unfold in front of him. Cue songs like Montrose’s Space Station #5 and more.

“My ego was telling me: They’re programmed you to be a rock star! So I used it as a tool to write songs about outer space and the future, songs like Crack In The World and Silver Lights, which is about the second coming of Christ – Jesus coming back in a spaceship.”

Prompted by his experience, Hagar began to delve deeper into the subject, reading up on alien encounters. What little sceptisism he had swiftly began to dissipate. Even today, as a multi-millionaire rock star with more than 20 albums to his name, he’s a huge believer in alien encounters – and damn anyone who says otherwise.

“Anyone that thinks that we are the only life in this universe is crazy. Those are the crazy people! Not the guys going around saying, ‘I went up in a rocket ship.’ It’s easier for me to talk about now. Twenty years ago you were tagged as crazy and you could lose your job and your friends for it. Nowadays the whole world’s getting smarter and they realise it’s a complex universe with wormholes and black holes. That there’s tons of possibilities for travel between dimensions. The human race is still dropping bombs on each other and killing the planet, that’s how ignorant we are. Imagine how sophisticated someone could be that’s a couple thousand years older than us. I think the possibilities are just vast and it really intrigues me.”

Sammy Hagar: The 10 Records That Changed My Life