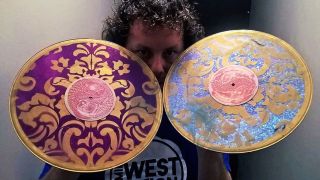 “We are always trying to push the bounds of creativity of what can be put in a record,” says Romanus Records CEO Chris Banta. “It’s such an open-ended artistic format, with endless possibilities.”

Take the Indianapolis label’s approach to In Ya Neck v2, by feisty Texan rock’n’roll duo Ghost Wolves, which came out earlier this year. Splatter vinyl was never going to be enough. Instead, the label issued a ‘Dangerous vinyl’ edition and inserted razor blades into the plastic, scattering them round the plastic like deadly sharks encircling a shipwreck. And — as if that wasn’t enough — they added a layer of free-flowing “gun powder” to the record, which tumbles around inside the vinyl as it moves. It might just be the first EP you’re not allowed to take on board an aircraft.

Or take Banta’s own band, Brother O Brother. Another fuzzed-up two-piece specialising in primitive, overdriven blues rock — think squealing feedback and drums that sound like distant mine explosions — the band have released a ‘Ravishing Native’ edition of their upcoming album Neon Native that looks so extraordinary we’re struggling to describe it. Quite frankly, it’s like the wallpaper in one of Saddam Hussein’s palaces. But it’s three-dimensional, kind of. And there’s only 25 copies in the entire world.

Then there’s the holographic records. And the one containing grain from an actual brewery. And the ones stuffed with feathers. And the glow-in-the-dark vinyl containing tiny dinosaur bones. And the ones filled with sand of two different colours, cleverly separated so they’ll never mix.

We needed an explanation. So we got in touch with Chris to ask what the hell he’s up to.

How did Romanus Records come about?

It started when I started making custom pressings for my own band but needed people to know that we were making them ourselves, as we were contracted to other labels. We’ve signed 10 bands in the last nine months.

What labels from the past do you admire?

Elektra Records, as they put out a lot of really gnarly rock that was cutting edge at the time. And RCA because of its rich Indiana heritage.

What contemporary labels do you admire?

Infinity Cat Recordings due to their roster, which consists of some of our favourite live bands on Earth. Third Man Records because of their innovations in vinyl. And bunch of independent labels including Fonoflo, Grimm tale, Shed House, Jett Plastic, Soul Step, Joyful Noise, VOSR, Wax Mage Records and so many more. We love independent labels.

How do you make these limited pressings?

The process of making these is a mastery of the dark arts. They are constantly evolving. Basically, over two years of constant experimentation is how I arrived at where I am now. It’s been a giant messy success so far. Thanks!

Does the quality suffer?

If we do things perfectly? No. If done without 100% accuracy there can be some surface noise can be an issue. We always strive for audiophile quality.

Can you explain the appeal of such limited editions?

For us it’s based around the idea that we’re pushing the bounds that vinyl can be art just as much as the music can be. I think people really rally around that and feel the same way.

Have you had any ideas for records that proved unworkable?

Oh, sure! With anything there is trial and error. Many of our early liquid-filled ideas proved unsuccessful. But those early designs led to other ideas along the way. We’ve dabbled with the idea of insect-filled but can’t stomach the process. Another one, too gross to follow through, was placenta-filled…

What does the rest of the year hold in store for Romanus?

We have releases for Turbo Fruits, Suck the Honey, Brother O’ Brother, The Pack A.D., Veseria, and a few others not yet announced.