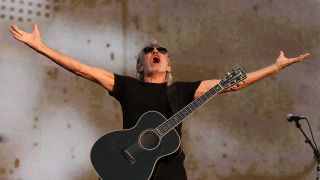 There's really nothing like 65,000 people in a park bellowing along with Wish You Were Here. As far as communal moments goes, it's right up there with World Cup victories, royal weddings and rinsing Piers Morgan on Twitter. As the sound bounces round the arena, voices calling out in the PA tower to the left while engines roar somewhere off to the right, and as lasers light up the sky, and as pigs fly, it's easy to get lost in the spectacle of a Roger Waters show, and to assume that's all about the science and the scale and the excitement.

If that's your takeaway, fine. But once the music has faded and the buzz diminished, should the audience not think a little about the other huge part of the Waters' live experience, the politics?

David Gilmour is an exquisite performer, but you'd never guess from his shows that The Dark Side Of The Moon was just as much about the excesses of consumerism and capitalism as Roger Waters' Is This the Life We Really Want? would be four decades laster. Gilmour plays it safe, and his shows are a vivid, technicolour celebration of the music of Floyd, but not necessarily the message. It's pure nostalgia.

There's absolutely nothing wrong with that, but Waters' use of contemporary video drags those same songs into the present day with some considerable degree of force. Whether he's addressing the refugee crisis or disparaging our leaders, he doesn't pull any punches (Donald Trump with a micro-penis? Sure, why not!).

Whether you agree with his message or not, Waters should be celebrated for clearly giving a fuck in an age where most rock stars of his vintage clearly don't. And as he throws a Palestinian keffiyeh round his neck and talks movingly about receiving it, it's difficult to doubt either his sincerity or his motives. 74 years old, and still driven.

It's easy to mock the anger in this music, to fire off accusations of hypocrisy or to answer any praise or criticism with whataboutery. After all, Pink Floyd are the ultimate stockbroker belt band, a comfortable listen for people with expensive hi-fis and second homes in Cornwall. It's not easy to reconcile Nick Mason's £30m Ferrari 250 GTO with a boatload of desperate migrants launching into the Mediterranean.

And yet it's impossible to remain unmoved by the children of the Rugby Portobello Trust, who join the band onstage in Guantanamo Bay-style boiler-suits for Another Brick In The Wall. These kids are part of the Grenfell community, and have probably been through the kind of turmoil no youngster should be exposed to, but they look delighted to be there. Waters' beaming face suggests he's just as thrilled.

Ahead of the closing Comfortably Numb, Waters talks about the Universal Declaration of Human Rights, signed in Paris in 1948. “The Declaration states that all of us here in this beautiful park, all of us in this country, all our brothers and sisters all over the world deserve equal and civil rights," he says. "And these rights are irrespective of ethnicity or religion. So they would extend to my brothers and sisters in Palestine.”

Again: putting whataboutery and partisan allegiances aside, who would argue with the simplicity of that ideal?

The lasting irony of the evening is that after all the sloganeering, the criticisms of Trump and May and Zuckerberg, and the exhortations to resist, the British Summer Time shows are amongst the most tightly controlled ever. Photo ID is required for ticket collection, there are airport-style metal detectors and bag searches on the way in, and our exit is soundtracked by instructions barked through megaphones as directions are flashed up on LED screens. It could be a scene from The Wall.

And then we obediently herd off towards public transport links, where we politely queue so that RFID and NFC readers may track our every move, before heading home to tell secretive, multinational advertising companies exactly how (and with whom) we've spent the evening.

If this is The Resistance, where we cheer songs of rebellion but blithely encourage the status quo, what chance does resistance have?

Are we really listening? Is there anybody out there?