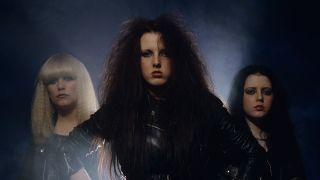 We pay tribute to the women who rock our world in Issue 246 of Classic Rock. Packed into 130 pages are articles about Joan Jett, Shirley Manson, Lzzy Hale, Kate Bush, Girlschool, Chrissie Hynde, Inger Lorre, Skin and Debbie Harry, plus interviews with everyone from Suzi Quatro to Sonja Christina, Elin Larsson and Elkie Brookes.

Along with the rest of the band Rock Goddess, guitarist/vocalist Jody Turner helped soften the unequivocally masculine NWOBHM scene, thought not musically – they could be as heavy as a wall falling on you. With their first two albums for A&M Records – Rock Goddess and Hell Hath No Fury – and the fist-punching, foot-stomping Heavy Metal Rock’N’Roll, they won over an audience clamouring for bands like Iron Maiden and Saxon – not an easy ask in 1983.

The original Rock Goddess re-formed in 2013, and late last year released an EP of new material, It’s More Than Rock And Roll.

Your dad was guiding your career in the early years, but did your parents approve of you (and your sister) becoming a rock’n’roller?

My dad was always in the business, either as a musician, agent or manager, and then later he had a music shop and rehearsal rooms, so this was our natural habitat. My mother was a great singer. We often sat around singing. We sound like the Von Trapp family.

Which women did you admire in music, and rock in particular, back then?

The first person to mention would be Joan Jett. I absolutely loved The Runaways – the whole band did. She was a definite influence for me in the early days, and Waiting For The Night is one of my favourite albums. Lita Ford is another. I just love her playing. Stevie Nicks, Kate Bush, Joni Mitchell, Janis Joplin, Nancy Wilson… I like Angela Gossow [ex-Arch Enemy] too – I love a bit of death metal. Of course, the wonderful Doro is still the metal queen. She always was.

Have you ever come up against overt sexism: crew guys, promoters, managers, some kind of glass ceiling?

I wish with all my heart I could say no, but that would not be true. I do have to emphasise that this is the minority, and the majority are great. However, we have experienced sexism. Julie [Turner, drummer] had this monitor guy who was a complete dick. She asked for her voice to be louder in the monitors and he said: “Sing louder.” I did have one guy in the audience asking me to “Get your pussy” out. I wish I could have brought a cat out on stage at that moment. It’s rare, though. Say that shit to me at your peril.

Rock Goddess were rolling with the whole NWOBHM scene too. It looked very blokey from the outside, but did it feel like that to you?

I like men, let me be clear on that! But I also hoped that as the years rolled on there would be more girls on the scene too. And there are, but not as many as we would have hoped. The blokey element never bothered me, but maybe it does other women. All my mates were in bands. We jammed at our house with them, bands like FM and Terraplane. It was a lot of fun.

People always say the eighties hard rock scene was sexist. Do you agree?

Are you talking about the videos with the scantily clad women in?! It does objectify women, and I would prefer they were in bands rather than parading around in bikinis, but I also believe in freedom of choice and doing what you want. One of the Girlschool videos had a parody of that: scantily clad guys parading about. I thought that was a funny take on it all.

Do younger bands tell you that you inspired them?

Yes – men and women. It means a lot to get that feedback. It’s really humbling, and on occasion I get very emotional about it. It means that much. I think of how I felt about the amazing musicians that inspired me, and then people say we’ve done the same for them. That’s big, and bloody important.

You can read the rest of our She Rocks! features in the latest issue of Classic Rock. Buy it online or become a TeamRock+ member to read it right now.