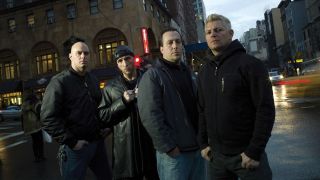 Billy (Graziadei, guitar/vocals): “Oh yeah, it’s been a while since we’ve got to come over regularly like we’d want to. The UK has always been a home from home for us. We can’t keep away for too long.”/o:p

You’ve played some pretty crazy shows over here, from stage invasions at Donington and Bloodstock to nearly sinking HMS Hammer…

“I think the UK definitely brings out the rebel side in us. There’s different hotspots around the world but the UK tops it. The boat went off! That was such a unique experience. We’ve been going so long, you think you’ve seen it all and then that comes along. It was definitely a bucket list moment.”

You must have seen some injuries in your time, doing such rowdy shows?

“So many injuries! One tour, between Bobby [Hambel, guitarist] and I, we counted 36 or 37 stitches. That’s one tour with Kreator! Broken ribs, tons of gashes, heads pretty scarred from so many stagedives, knocked out or broken teeth… and somebody pulled a sword on me once.”

“Yeah, after a show we were hanging outside with the crowd, like we do, and this car was trying to get out. People weren’t moving fast enough for him and he bumped a bunch of people with his car. So I kicked it as he went past. I was so pissed I got on a bike – who knows where I found it – and I went after him. He turns the car around, gets out, pulls this samurai sword on me and took a swipe. He missed me, though. Luckily I dodged that bullet.”

So, what’s your preference: a festival or a club show?